How far is it from Detroit to Nashville?

In 1992, John Dryzek published a very good article called "How far is it from Virginia and Rochester to Frankfurt? Public Choice as Critical Theory" (British Journal of Political Science).

Some would argue that these are mutually exclusive theories.

I thought about Dryzek's article yesterday when I was listening to a new CD I had just purchased for the drive back to Kentucky.

I've tweaked Dryzek's inquiry in the title of this post, but this is arguably the central question: What would the White Stripes sound like if Loretta Lynn was their lead singer and primary songwriter?

Unlike many such hypotheticals, however, the answer to this one is easily determined. Lynn's latest CD, "Van Lear Rose," was produced by Jack White -- and he both sings and plays on the album. Lynn wrote every tune, and she covers all the typical country themes.

It's my early favorite for alt-country album of the year. 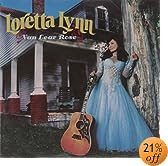 I also bought "Elephant" and am wondering if I should have picked up the soundtrack to "Cold Mountain." Anyone have a thought about that?

I should be back in the office this week and ready to resume regular blogging.
Posted by Rodger A. Payne at Sunday, June 27, 2004