I am very pleased the Kansas Jayhawks men's basketball team won its opening round NCAA tournament game by 34 points yesterday, against a Northeastern team that some experts touted as a sleeper pick for the second weekend. Northeastern attempted a lot of 3-point baskets, but did not make them at an efficient rate. When Kansas has lost this year, often by double digits, it has frequently been because of hot early game 3-point shooting by their opponents.

Indeed, because of the troubles Kansas has faced this season, I have picked the team to lose Saturday to Auburn. Obviously, I would be pleased to be wrong about that prediction.

Though Auburn had a very close game against New Mexico State, note that Kansas also had a difficult game against the same team back in December.

That December game was played in KC at the Sprint Center, which is technically a neutral court, but the crowd obviously and overwhelmingly favored Kansas in that venue. At the time, Udoka Azubuike, the 7'1" Kansas center, was sitting out his first game of the season with a relatively minor sprained ankle. He would soon return and play in two additional games before going down for the season with a much more serious injury -- a torn ligament in his hand. Azubuike last played in a victory over Oklahoma on January 2. At the time, Kansas was 12-1 and ranked 5th in the country.

In that December game versus New Mexico State, sharp-shooting senior guard Lagerald Vick, who eventually left the team, was being punished by coach Bill Self for a "really bad Thursday" (the date of the previous practice) and missed his second consecutive start. Vick ultimately left the team under mysterious circumstances after the February 5 loss to rival Kansas State. In the 10 games after Azubuike was lost for the season but before Vick left the team, Kansas was only 5-5. All of the losses occurred on the road and three were against NCAA tournament teams, but the squad did not look like an elite team. Rather than provide poise and leadership, Vick often made costly turnovers and attempted dubious shots, which likely frustrated the coach a great deal.

Since Vick's departure, Kansas has gone 9-3 starting four talented Freshmen. The three losses were to NCAA tournament teams, two on the road and one in KC during the Big 12 tournament final.

Aside from some dark clouds that continue to linger on the horizon, the near future would appear to be bright for Kansas basketball. No active Kansas player participated in senior day and most scouts say the team does not have any likely first round 2019 NBA draft picks. Some services say that Azubuike and second team all-American Dedrick Lawson might be late second round picks should they decide to declare early for the NBA draft. If all the freshmen return, the team will have the experience and talent sufficient to have a very good season next year.

My 2019 NCAA bracket has Duke beating Kentucky in the final, with Texas Tech and Virginia as the other teams in the Final Four. When I filled out the form, I didn't really consider the injury to Kentucky's best player, which likely would have caused me to pick UNC from the Midwest region. 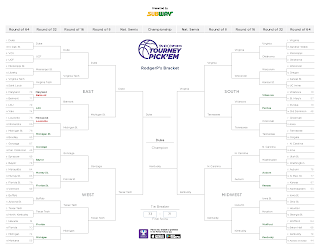 I'm in a couple of local pools (scored by ESPN, CBS) that do not align perfectly with these choices. But they are close. In one of those pools, I picked Saint Mary's over Villanova, for example.

Last week, I traveled to Iowa State University in Ames to attend a conference on "Canadian-American Relations in the Era of Nationalism and Populism." I reconnected with many of the colleagues I met at Carleton last fall and had a good time at the meeting. It was interesting and informative.

The conference organizers, Professor Jim McCormick of Iowa State, together with independent scholar Dr. Gerry Schmitz, intend to produce a special issue of Canadian Foreign Policy Journal. Jim held the same Fulbright research chair at Carleton as I did, but during fall 2017. Gerry has his hand in many interesting projects, including an annual international film festival and a film blog. He used to work as a film critic and as Principal Analyst for the Parliamentary Information and Research Service.

A draft of my paper on "Canada, the Multilateral Order, and the America First Agenda" can be found here.  Comments would be welcome as our submission target is mid-May.

I tweeted a picture of the last panel at the end of the conference:

Fellow attendee Frédérick Gagnon from University of Quebec tweeted several pictures as well, including a photo of the opening keynote speaker Colin Robertson:

Soon, I will discuss additional news about my America First project, including a related paper accepted for delivery at the British International Studies Association Annual Meeting in London in mid-June and a new collaboration on "America First, Multilateralism, and the Human Rights Regime."

Metacritic makes an annual list of the top films of the previous years based on top-10 lists produced by various film critics. This is an aggregation based on lists produced by 334 critics:
I've now seen 20 of the 30 listed films. My rankings would be (roughly):

The Favourite
If Beale Street Could Talk

The Rider
Eighth Grade
Can You Ever Forgive Me?
Cold War
Shoplifters
First Man

Tier 3 Well above average, but flawed in some way

You Were Never Really Here
A Star is Born
Sorry to Bother You
Support the Girls
Widows
Black Panther
Ballad of Buster Scruggs
Minding the Gap
MI Fallout
Spider-Man: Into the Spider-Verse


This list is not very precise as most of these films are truly very good and worth viewing. Everything through First Man reflects top-notch film-making. Those listed afterwards are also good, but most have one or more flaws that made them less interesting to me.

The Other Side of the Wind

Orson Welles's final film was not very good and perhaps should not have been released after all. A lot of the acting was terrible and I wanted it to end long before it finally did. There were some beautiful shots from the film-within-a-film, but mostly I kept thinking about how much I liked Chinatown. John Huston's presence brought that to mind.

Of the 10 films I've missed as of the original post, it's unlikely I'll see Paddington 2.

These are the others in alphabetical order. I'll move them up as I see them:

Regular readers will note that I've dropped First Man a bit since my end-of-year ratings. On any given day, I might feel slightly differently about film rankings within the different tiers. A lot of the films my spouse and I have seen in early 2019 have superior acting performances with great storytelling. 2018 was a good year for film.