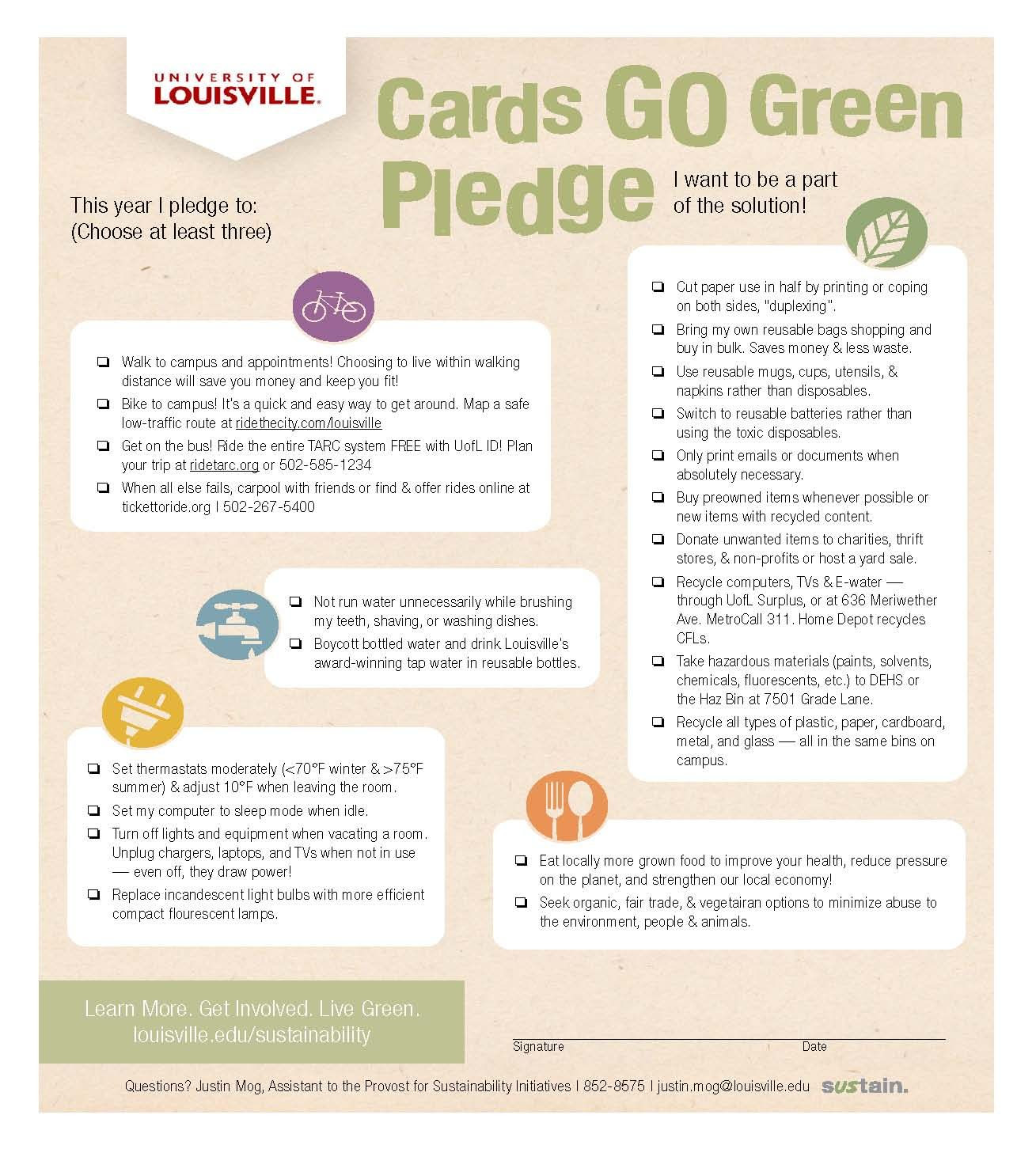 Very soon, the University of Louisville will be announcing some terrific news. As it recently reported to the American College & Universities Presidents' Climate Commitment, from 2006 to 2013, University greenhouse gas "emissions have dropped over 27% from 246,929 to 178,679 metric tons."

The official goal is climate neutrality by 2050. However, the reported reductions have already enabled the University to meet its original goal of reducing emissions 20% by 2020. Back in 2007, this blog was noting the great distance the University needed to travel. We haven't arrived at the final destination, but there's much to celebrate. Particularly in a coal state.

The lion's share of the credit for this success likely goes to the recently retired Vice President for Business Affairs, Larry Owsley, though a lot of people have worked with Justin Mog, the University's Sustainability Coordinator, to make this possible. As previously reported, I've been involved in local efforts to reduce greenhouse gas emissions for much of the past decade. For the past five years, most of my contributions have been at the University level.

The original Green Energy pledge seems to have disappeared, but a relatively new effort by students offers some suggested individual actions (see above image).

I neglected to blog about a couple of service contributions in mid-to-late December 2013.

First, I was interviewed by a former student about the new U.S.-Iranian nuclear deal. You can find his piece at Rudaw, a Kurdish Iraqi English-language outlet. I'm quoted at the end of the December 30 story:


Rodger Payne, Chair and Professor of Political Science at the University of Louisville, Kentucky said that the new deal may help the Iranian economy, but might also raise fears among some of Iran’s neighbors.

“The states that are unhappy either fear that Iran will become more powerful as a result of easing economic sanctions or by secretly continuing its nuclear program in violation of the agreement,” Payne told Rudaw.

He said that some countries may still be in favor of a military strike to stop Iran’s nuclear ambitions, or advocate tougher sanctions. But “the world wants Iran’s oil, so there are limits on just how extensive sanctions can be in this case.”

That was accurate, but I was questioned about why some neighboring states oppose the deal. I personally think these fears are over-stated and that the deal looks very good, especially when contrasted to the prospect of American or multilateral military strikes.

On December 12, I traveled up to Antioch College to speak as part of their Global Seminar in Governance. Most of the school's (very small) student body turned out to hear me talk about "Democratic Governance in a Global Context." I addressed various possible meanings of this phrase and favored global deliberation about American use of force in the alleged service of international purposes.


Wednesday night at 7 pm, the Center for Asian Democracy is hosting the Malaysian political cartoonist Zunar, or Zulkiflee Anwar Haque, who will deliver the Annual Lecture.


He is expected to talk about the importance of free expression, the challenge of his work in Malaysia and the need for activism from cartoonists, satirists and comedians as well as human rights activists and social campaigners.

Last fall, I saw some of Zunar's political cartoons when participating in a workshop on "Comedy and Satire as Discourses of Protest in Asia." The images presented there were just terrific. Here's more info on Zunar:


[He] received the 2011 Award for Courage in Editorial Cartooning from Cartoonists Rights Network International. In 2010 the Malaysian government banned the publication of his book “1 Funny Malaysia” and then months later police seized and confiscated copies of his  latest book, “Cartoon-o-phobia,” and arrested him hours before its planned launch. He lost his appeal for wrongful arrest when the Malaysian appellate court ruled that police had cause to suspect the book was seditious.

To learn more about his life and work, visit his website.

Here are the logistical details:


7 p.m. in the Brown & Williamson Club at Papa John’s Cardinal Stadium, 2800 S. Floyd St.; visitors should enter through Gate 6. The talk and reception afterward are free and public, but guests are asked to register through a form on the center’s site


Updates (January 22): See this article in the Louisville Courier-Journal and this piece posted on the WFPL website.

On Wednesday night, some friends and I attended the Jason Isbell concert at Headliner's. It was a terrific show -- and longer than I expected. The venue holds just under 700 people and it was packed with fans.

However, this was the first time I had seen Isbell fronting his own band, though I did see him twice when performing in the Drive-By Truckers. I blogged about one of those shows back in 2006.

The Isbell song "Outfit" was a highlight of that Truckers show and became something of a running joke on Wednesday night. Isbell told the crowd that he played "Outfit" every night, but that he never played it when someone in the crowd yelled out the song title. Of course, fans had been calling for it throughout the night -- and continued to do so after his warning.

I only own one Isbell CD -- "Live from Alabama" -- but this "Southeastern" show offered several songs from his new recording, including "Super 8," which has now been stuck in my head for a couple of days.  It doesn't appear that this show featured his full band, the 400 Unit.

Holly Williams, grand-daughter of Hank (and half sister of Hank III) was the warm up act and she was OK. Her sound was fine, but I didn't find much of distinction in her music.

Allow me to repeat the ground rules: I will not list books that I reviewed, unless those reviews were published. In my academic job, for instance, I reviewed a number of books competing for a $100,000 award exhibiting the best "ideas for improving world order."  However, only the winning entry is listed here. I read it as a member of the Final Selection Committee.

So, what did I read this year, mostly for pleasure? (Some of the recommended books may include a link to Powell's books; the blog receives a 7.5% commission on sales that begin via these links).

The Tragic Vision of Politics by Ned Lebow

What We Know About Climate Change by Kerry Emanuel

The Race For What’s Left by Michael Klare

Scorecasting; The Hidden Influences Behind How Sports are Played and Games are Won by Tobias J. Moskowitz and L. Jon Wertheim

The White Rat by Whitey Herzog

The Extra 2% by Jonah Keri

They Tasted Glory by Wil Linkugel and Edward J. Pappas

Additionally, I read just about every word in Baseball Prospectus 2013, but not in cover-to-cover fashion. It was edited again by King Kaufman and Cecilia M. Tan.

Of these non-fiction books, most were worth reading. The Hymans book quite deservingly won the 2014 Grawemeyer Award for Ideas Improving World Order. I blogged about it at the Duck of Minerva.

I read Lebow as part of my comedy book project. I appreciate Lewbow’s reading of realist tragedy, but I think his perspective is often much more consistent with critical international relations theory than it is with realism.

The Harris, Emanuel and Klare books were all used in my fall Global Environmental Politics class. I really liked the Harris volume and the students seemed to especially appreciate the chapter on happiness. The Klare book is not as strong as other works by him that I've used previously in this class or in American foreign policy.

I already blogged about Scorecasting a few weeks ago. It's a good book, though not flawless. If you enjoyed Freakonomics and would like to see that kind of thinking applied to various sports questions, then pick it up. I especially enjoyed the chapters explaining the Cubs long history of losing and the chapter explaining why football teams should "go for it" more frequently on 4th down.

None of the baseball books are classics, but the Herzog autobiography is a quick and interesting read. Herzog managed my favorite team (KC Royals) during an era when they were among the best franchises in the major leagues.

I was frustrated that my former professor, Wil Linkugel, did not utilize contemporary baseball statistics when evaluating players who had very short careers for one reason or another. In contrast, Jonah Keri explains how the Tampa Bat Rays have taken advantage of the most current methods to become a winning franchise.

As I have in most years, I place the best works of literature at the top of the list, then the genre fiction. The least interesting or entertaining books are listed last in each section.

The Wonder Boys by Michael Chabon

Person of Interest by Susan Choi.

All of this fiction is worth reading. I don’t usually read books that are on the best-seller lists, but my wife recommended Flynn’s book highly, as did an old friend from college, so I read it and enjoyed it very much. Hornby’s book is perhaps directed at a young adult audience, but it is quite good. Both of the books by Updike and Choi are responses to the “war on terror,” but both frame their stories in domestic U.S. settings.

From Russia With Love by Ian Fleming

The Way Some People Die by Ross Macdonald

In the Midst of Death by Lawrence Block

The Outfit by Donald E. Westlake (wring as Richard Stark)

C is for Corpse by Sue Grafton

I, Robot by Isaac Asimov

The Prop by Pete Hautman

Thanks mostly to Bookmooch and PaperBack Swap, I continue to read books by a diverse group of (mostly) hard-boiled crime story writers. These authors typically develop a single main character across a long series of books: Parker's Spencer, Stark's Parker, John MacDonald's Travis McGee, Sue Grafton's Kinsey Millhone, Michael Connelly's Harry Bosch, and Ross Macdonald's Lew Archer. Fleming’s James Bond (007) is not quite in this genre, but you knew that.

Most of these books are worth reading, though it was not a very good Travis McGee story and I was disappointed in less-than-their-best stories by Crumley and Dick.