Realist IR scholars reject the possibility of meaningful international cooperation on the idea that not all states can benefit from such cooperation. That's wrong, liberal institutionalists retort, because classic trade theory demonstrates that cooperation can promote mutual "absolute" gain.

Realists counter with the point that mutual gains rarely result in equal distribution. Some states will benefit more from cooperation and these relative advantages mitigate against cooperation. Why would a state partake in an agreement that helps competitors more than it helps itself? Essentially, because realists see international politics as a struggle for power, states can prevent a redistribution of power by refusing to partake in meaningful cooperation.

Plus, on many truly difficult issues, there are going to be costs to cooperation -- similar to the dues union members pay for the benefit of membership. States have an incentive to free ride, rather than to pay costs to create gains. Thus, on many global issues that require genuine multilateral cooperation -- Kenneth Waltz mentioned “poverty, population, pollution, and proliferation” (209) -- states won't work together because they lack incentives.

Realists do not think much of existing international cooperation. Believe it or not, a prominent realist view of past trade practices suggests that they reflect typical interstate competition rather than real cooperation. Realists recognize that states form alliances when confronted by potential hegemons, but this is basically because their survival is potentially at stake. In lesser circumstances, a strong state might set up sham institutions to promote forms of cooperation that are in their individual interest and essentially coerce others to participate. This could include institutions that serve multiple purposes, promoting selfish security cooperation with small economic bribes.

This is a quick and simplified account of a complex debate, of course, but I mention it because of this study result I read in The Atlantic last October.** Individual Americans apparently embrace this vision and reject the prospect of mutual benefit if the benefits provides relative gains to "competitors." IOW, people see other people as competitors:


In a survey of faculty, students, and staff at the Harvard School of Public Health, nearly half of the respondents said they’d prefer to live in a world where the average salary was $25,000 and they earned $50,000 than one where they earned $100,000 but the average was $200,000. Similarly, a majority favored relative over absolute advantage when it came to their own intelligence and attractiveness, their child’s intelligence and attractiveness, or praise from a superior. Apparently the survey respondents would rather the planet be filled with stupid, ugly children than have their own child left behind [1].

There are apparent lessons in this about the rise of Donald Trump and the populist/nationalist concerns of his supporters. Trump wants to build a wall along the southern US border, deport millions of undocumented immigrants, and impose new tariffs on major trading partners such as China and Mexico. Many economists predict that his policies would hurt the white working class more than others. However, their analysis is generally framed in terms of utility theory.

What if his voters don't care about utility as much as they do about perceived relative gains -- for them personally as well as for the US? Perhaps they are willing to be additionally impoverished so long as their competitors do worse -- whether that is undocumented Mexican workers or China.

The danger, of course, is that Trump voters are likely very wrong in how his presidency might influence the outcomes they desire. His tax policies, for example, basically continue long-term Republican plans to benefit the richest Americans -- and this link is from The Economist, not some lefty politician or organization. Would the U.S. win a trade war with China?

Realist international relations is a theory built upon fear of real and potential threats, typically defined in material terms. In the post-9/11 age, much of American foreign policy focuses on fear of various kinds of allegedly "existential" threats that seem less concrete than that. Just click on some of the labels below to get an idea of some of my past blogging on this topic. Obviously, various fears continue to resonate given Paris, San Bernardino, Brussels, and Orlando. Donald Trump's politics seem built on fear.

Some months ago, I pulled a page from the January 11/18 issue of The Nation where Simon Wolfe Taylor reviewed Joseph LeDoux's book Anxious. It was posted online in mid-December 2015. LeDoux is an expert in human emotions -- a neuroscientist, not an IR scholar. Neither the words "terrorism" or "war" appear in the piece:


Currently the Henry and Lucy Moses Professor of Science at New York University, LeDoux has been grappling for the better part of the last four decades with questions of how emotions are processed by human and animal brains.

Indeed, much of the review has to do with anxiety rather than fear, though Taylor ultimately accuses LeDoux of failing to distinguish between them adequately. Taylor does credit LeDoux with his clear thinking on how the brain reacts to genuine threats (fear) because personal safety is at stake.

When reading the review originally, I circled these two passages that center explicitly on fear and the potential links to political science:


Contemporary scientists generally understand fear as the recognition of an identifiable and present threat, and anxiety as the anticipation of an undefined future threat: definitions that bear only the slightest resemblance to Kierkegaard’s and Freud’s conceptions of those states, which themselves differ considerably.

If this distinction is meaningful, then IR realists and various contemporary politicians build much of theory and programs around uncertain future threats anticipated by anxiety rather than genuine current threats. The reviewer continues:


LeDoux does not consider the idea, advanced most persuasively by the political theorist Corey Robin, that fear is a political idea as much as a conscious state.

Maybe one might say that IR-relevant fears/threats are socially constructed?

I'm not really qualified to speak to how either Taylor or LeDoux discuss anxiety at the personal level, but Taylor credits LeDoux for gesturing towards a humanistic approach to understanding (and addressing) anxiety. This passage is interesting, suggesting that anxiety is actually a positive sign:


Although it could be debilitating, even terrifying, anxiety was regarded by the likes of Kierkegaard, Martin Heidegger, Kurt Goldstein, Paul Tillich, and Reinhold Niebuhr as the price we pay for some of the values we hold most dear, including freedom, imagination, and creativity. There is, according to the existentialists, a positive correlation between anxiety and human potentiality; as Kierkegaard put it, “the more profoundly he is in anxiety, the greater is the man.”

Here is Taylor's description of more humanistic approaches to anxiety:


Rollo May, a psychologist and the author of 1950’s The Meaning of Anxiety, declared: “One has anxiety because it is possible to create.” Patients, he continued, should be encouraged to recognize that the “presence of anxiety means a conflict is going on, and so long as this is true, a constructive solution is possible.”

Any notion of a positive understanding of anxiety has almost entirely collapsed over the last three decades. To be sure, there are legitimate reasons to be skeptical of the kind of treatment advocated by May and other existentially oriented therapists. Merely asserting a link between anxiety and artistic fulfillment, for example, does little to help a patient in the grip of a panic attack. But the proposition that anxiety can be channeled into constructive behavior or activity is surely an idea worth considering—one with the potential to provide comfort and hope to many thousands of patients

I'm not sure there are lessons here for IR. How could we channel constructive creativity as a mass response to terrorism?

I followed the story throughout the day on twitter. Here are the key tweets with my comments often added to the originals. Incidentally, Phillip Bailey was one of my students year ago:


As of this morning, @GovMattBevin says the current #UofL board of trustees have been sacked. #ItsHappeningHere
— Phillip M. Bailey (@phillipmbailey) June 17, 2016

.@GovMattBevin says by executive order he is appointing a 3-member interim board to run #UofL for the next two weeks https://t.co/wxLipk4ZYf
— Phillip M. Bailey (@phillipmbailey) June 17, 2016

Law says fired only for cause, after CPE hearing & finding of cause. But header says effective through July 15. Hmmm https://t.co/hQbm8cjxpl
— Rodger Payne (@RodgerPayne) June 17, 2016

serious questions among trustees about the legality of Bevin's moves on @uofl board. But unclear if any will fight it
— Chris Otts (@christopherotts) June 17, 2016

.@emilybingham1 says they were working on a smooth transition for @UofLPrez before @GovMattBevin moved in with his decision. #UofL
— Phillip M. Bailey (@phillipmbailey) June 17, 2016

Law says Board members can only be removed for cause, after CPE hearing. Also, 17 members. https://t.co/uPLzfYv1T8 https://t.co/pPlhfE6xmP
— Rodger Payne (@RodgerPayne) June 17, 2016

My family members traveled to Tulsa for Memorial Day weekend. I'm pleased to report a couple of interesting new places to visit.

First, with my sister and her spouse, I tried the new Prairie brewpub downtown. We didn't eat, but I tried several beers (one was merely a sample -- the Pilsner). I liked the low abv Pale Ale, but the Daddy Stack IPA was the standout. I've previously tried the darker BOMB! 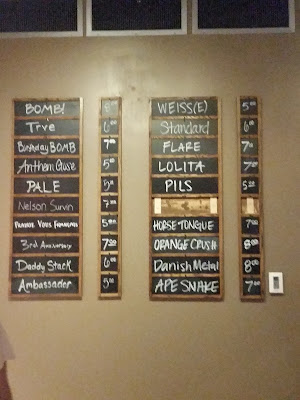 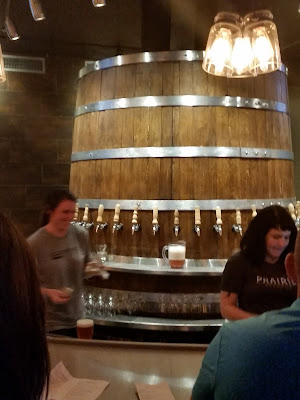 On Sunday afternoon, my spouse and daughters visited the Woody Guthrie Center with my brother-in-law (who wanted to see the Grammy Museum's traveling Stevie Ray Vaughn exhibit). 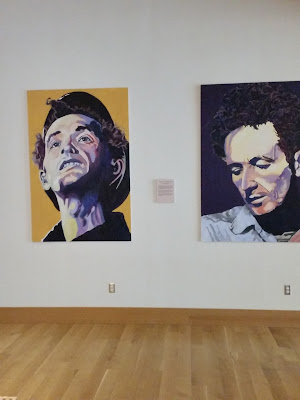 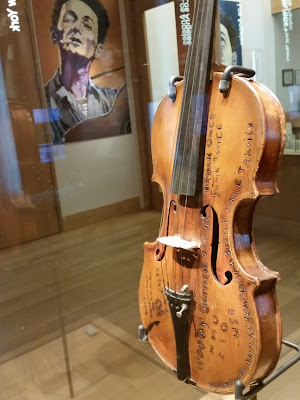 The lyrics to "This Land is Your Land" are under glass in the very center of the Center. 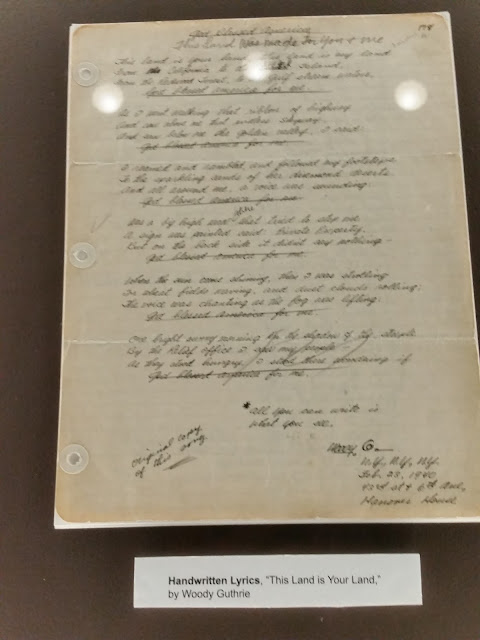 I didn't get to take in a baseball game, unfortunately, but my brother-in-law and I walked down to the new ONEOK ballpark when we dined nearby in the Blue Dome district. 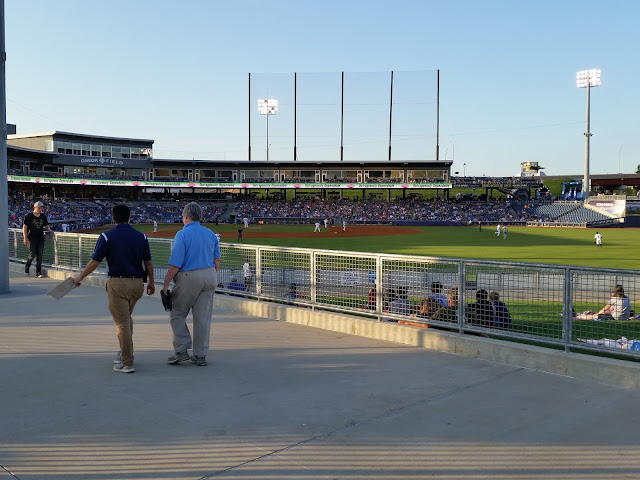 It was a fun weekend.