I have not attended a big league baseball game since 2017 when I caught the KC Royals visiting Baltimore on my birthday. Last year, of course, I didn't see any minor league games either, though I usually manage to see one or more minor league games every summer. Indeed, last season was the first since since 1984 that I didn't catch at least one professional baseball game.
This summer I've managed to attend three games featuring AAA teams -- in three different ballparks.
Our SABR group attended a Louisville Bats game on July 24 against the Memphis Redbirds. The group had a box courtesy of the team, but I walked to centerfield during the game to snap this picture: 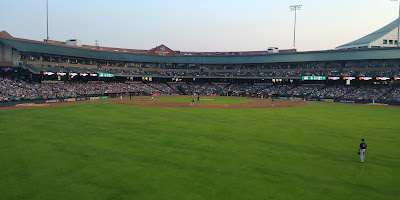 On August 7 my spouse and I attended an Omaha Storm Chasers game in Columbus, Ohio, against the Clippers. I wanted to see Bobby Witt, Jr. before he is promoted to KC. He did not disappoint as he hit a grand slam in the second inning and a loud double in another at bat. The game was a slugfest.

This past weekend, we drove to Indianapolis and saw the Bats lose to the home team in another high scoring affair. We had great seats: 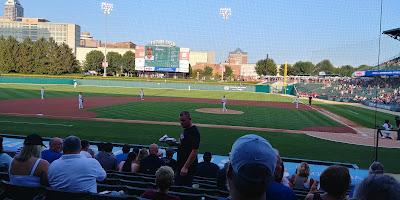 With the visits to Columbus and Indianapolis, I managed to see some ballparks for the first time -- and visit a nice brewpub in each city. That would be Hoof Hearted (and BrewDog) in Columbus and Ellison in Indy.