I just returned from a long weekend in the Tulsa area. My mother is selling her house in Owasso, which is a northeastern suburb that has experienced incredible growth in the ~25 years she lived there.

This sign is a relatively new addition as I didn't notice it in my December visit: 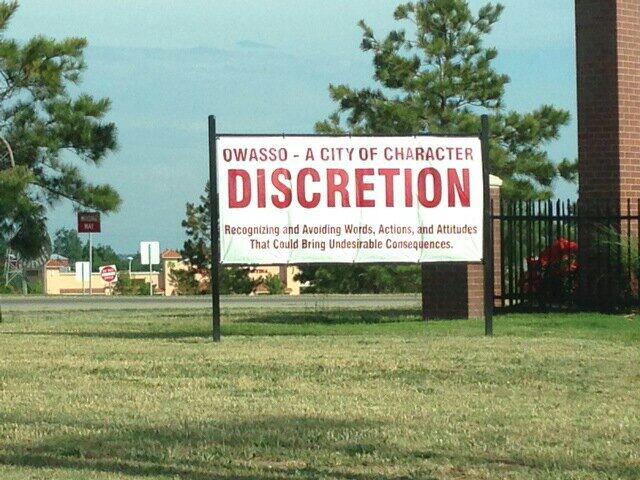 I investigated and found that back in 2002 the city government voted for a "character initiative." They apparently pick a trait of the month and the one for May 2014 is discretion.

A friend of mine from college used to paraphrase Shakespeare by saying "discretion is the better part of valor." However, the typical usage misses the irony the Bard intended:


In Shakespeare’s Henry IV, Part I when Prince Hal finds the cowardly Falstaff pretending to be dead on the battlefield, the prince assumes he has been killed. After the prince leaves the stage, Falstaff rationalizes “The better part of Valour, is Discretion; in the which better part, I haue saued my life” (spelling and punctuation from the First Folio, Act 5, Scene 3, lines 3085–3086).

Falstaff is saying that the best part of courage is caution, which we are to take as a joke. Truly courageous people may be cautious, but caution is not the most important characteristic of courage.

This passage is loosely alluded to in the saying “discretion is the better part of valor,” which is usually taken to mean that caution is better than rash courage or that discretion is the best kind of courage. Only Shakespeare scholars are likely to be annoyed by this usage.

Somehow, I missed this comment from General Stanley McChrystal, from an interview in Foreign Affairs in the March/April 2013 issue:


If you look at the role I had in Iraq, it is sexy, it is satisfying, it is manly, it scratches an itch in the American culture that people like.

The interviewer, Gideon Rose, had just asked the General to respond to people who say "I like the Iraq Stan McChrystal of raids and drones and targeted strikes, but I don't like the Afghanistan Stan McChrystal of clear, hold, and build and counterinsurgency. I want to deploy the first but avoid the costs and difficulties of the second."

The headline for the interview is "Generation Kill," which was also the title of an HBO miniseries in 2008. That show was about the 2003 American experience in Iraq.

I didn't watch the show, but this video seems to get at the gendered message:

Back in September 2001, Dan Lindley published a teaching guide to "Dr. Strangelove" that covered much of the familiar ground about the film's treatment of nuclear deterrence strategy.


The most important theme of the ﬁlm is that it makes fun of the sad, perverse, and absurd reality that the U.S. and the Soviet Union could destroy each other within 30 minutes.

The first time I ever showed the film in a class was while I was a term/visiting professor at Northwestern. To fulfill part of my overload teaching assignment, the department chair had allowed me to teach a small seminar on nuclear deterrence. The handful of students and I watched a video of the film very late in the term after everyone had a strong feel for deterrence theory and the class had read many original declassified documents about nuclear planning, threats, etc.. Back in those days -- around 1990 -- the film did not replay regularly on cable television. Streaming media was not ubiquitous and it was a real treat to be able to see Stanley Kubrick's masterpiece.

Did I mention that every student in that small seminar was male? No women had signed up.

In more recent years, I've adapted the film class to a wider audience of political science students. The course still focuses on "Global Politics Through Film," but it is now regularly taught as one of our senior capstone seminars, a "culminating undergraduate experience." To capture a wider range of ideas from the discipline, I have been addressing some of the other prevalent themes of the film:


Indeed, the gender politics in the film are obviously quite provocative, essentially equating male sexual fantasies with war and nuclear planning. The latest Planning Guidance for Response to a Nuclear Detonation suggests that absurd nuclear fantasies continue to influence today’s security policymakers.

I was reminded about this today when I happened across a magazine article about the politics of the Pentagon's F-35 aircraft, also known as the most expensive weapon the U.S. has ever attempted to build. Needless to say, it has been a controversial weapon given those costs, plus various setbacks, delays, and uncertainties about the piloted weapon's purpose in an age of drone warfare. Still, one alleged impetus for the new fighter echoes a theme that Stanley Kubrick emphasizes in "Dr. Strangelove":


"There's always this sexual drive for a new airplane on the part of each service," says Tom Christie, the Pentagon's chief weapons tester from 2001 to 2005. "Persistent, urgent and natural."

That's a gendered lesson about "Dr. Strangelove" that Lindley does not overtly discuss in his film teaching guide. Perhaps it is what he had in mind when he calls nuclear exchange scenarios "sad, perverse, and absurd."


P.S. Coincidentally, I also recently read a book review by Akemi Johnson that discussed What Soldiers Do; Sex and the American GI in World War II France by Mary Louise Roberts. This paragraph gives you an idea of that book's thesis about gender and IR:


“The history of war,” Roberts writes, “cannot be separated from the history of the body.” Beyond combat, the bodies involved—the ones that physically connect, flesh upon flesh—are usually those of male soldiers, arrived from a foreign land to liberate, destroy or occupy, and those of female civilians, attracted or yanked into the military world. The interactions between them are intimate yet iconic, private yet political. A rape by an American soldier threatens to expose harsh realities about American hegemony; another GI’s part in an international romance suggests an entire country’s willing deference to benevolent US control. Harnessed for propaganda and protest, tangled in injustices like institutional lynching, these sexual relationships are essential to understanding war and its aftermath.

Spending Reallocations at University of Louisville

A few days ago,  University of Louisville President James Ramsey sent the following message to the campus community:


It was another disappointing legislative session given the cut in our recurring state appropriation, but we appreciate the funding in FY15 for the new classroom building for the Belknap Campus.

You are aware that we as a campus community have been discussing the 2014-15 University of Louisville operating budget for several months.  I appreciate deeply Susan Ingram Howarth’s efforts on behalf of our campus.  Susan has had meetings with Faculty Senate, Staff Senate, Student Government, deans, vice presidents and other campus groups.  Susan conducted several forums, particularly on proposed tuition increases.  A week ago I conducted a campus-wide budget forum.

Any way we slice it, it’s another bad budget – a $2.2 million cut in state appropriation; the need to again increase tuition; and lack of funds that we need for critical investment in faculty, staff and students.

After a month of deliberations and feedback we will recommend to the Board of Trustees of the University of Louisville at its May 8th meeting a budget that provides a 2% salary increase for both faculty and staff; a 5% tuition  increase for in-state undergraduates (other proposed tuition increases are attached); and a .65 percent unit budget cut.  We worked hard to not pass on the entire state budget cut to the units and understand the pressure the unit budget cut places on the campus.

I have appreciated your input and, more importantly, your efforts to keep the University of Louisville moving forward in these continued difficult fiscal times.

I attended a briefing offered by Susan Howarth some months ago. At the time, the information I received showed that a 5% tuition increase would generate $11.1 million. Financial aid increases with tuition, so some of this is returned (reallocated) to students. Unfortunately, the spreadsheet I was provided only lists new spending like that in the catch-all category "strategic initiatives." Salary increases are in that pool too, as are health care cost increases.

Still, because different tuition and salary options were presented, I can make educated guesses about how this breaks down. It appears that each 1% increase in salary costs just over $2.4 million. So a 2% increase is roughly $4.9 million in new expenses.

Total those together and that adds up to about $7.5 million of new spending from the $11.1 million in tuition revenue.

The 0.65% unit cut is out of a 1.5% overall cut in state funding to the University of Louisville. Put differently, units are being asked to finance 43.3% of the total cut even as their personnel will enjoy a 2% salary increase. They'll need to find $950,000 in cuts to earn $4.9 million in salary.

If the salary increase was only about 1.63%, no new spending cuts would be needed.