Given that I started the book in April, you would probably say that I am slowly making my way through the 2011 Baseball Prospectus. Moreover, I do not read the team (and adjoining player) summaries in order. Rather, I read the comments for the good teams first. I'm now on the Baltimore Orioles section (meaning I'm nearly finished), which is why I read the Adam Jones comment today. Jones is a right-handed hitting outfielder for the Os.

In any case, the 2011 BP points out that Jones has had a weird platoon split in his career. He has been fairly bad against left-handed pitchers (LHP), which is abnormal for right-handed hitters. Put succinctly,

"The average platoon advantage for right-handed batters in 9%. Righties hit 9% better against lefties than righties."

The career lines include about 700 plate appearances versus LHP and nearly 1700 versus RHP. Jones is a talented and fairly young player and still could improve his game. However, as BP points out, if he does not improve in some areas, he could end up as a fourth outfielder -- a useful, but ultimately replaceable reserve.

It seems more-and-more clear that Jones's reverse-platoon split is not the product of an overly small sample size from a single season. Rather, it is a fairly odd (and in this case, unfortunate) player trait. As BP said.

Yahoo has a link to let users see Batter vs. Pitchers matchups, so I had a closer look at Jones. He has had quite a bit of difficulty against some of the league's premier left-handed pitchers. John Danks (CHX), Gio Gonzalez (OAK), Cliff Lee (CLE-SEA-TEX-PHI), Jon Lester (BOS) and David Price (TAM) have dominated him. Against these five pitchers, Jones is 18-for-101 with 3 doubles, one home run. and only 7 walks received. That would make for a horrible triple slash line, around .178/.231/.238. That is an approximation because I didn't bother to see if Jones had reached base because he was hit-by-pitcher or if he had any sacrifice flies against these hurlers.

Moreover, against Brett Cecil (TOR) and Jason Vargas (SEA), guys who are not household names and not discussed as potential Cy Young candidates, Jones is 5-for-33 with 1 walk. That's around a .152/.176/.152 line. I didn't find very many other LHP that Jones has faced more than 10 times in his career.

To show the importance of sample size -- and to reveal that Jones has done much better against some lefties -- consider Jones's performance against staff aces Ricky Romero (TOR) and C.C. Sabathia (NYY): 22-for-70 with 3 doubles, a triple and 3 home runs, plus 4 walks. That's about a .314/.351/.514 line. If Jones could hit that well against all LHP, he'd be a star given his proven ability versus right-handed pitchers and his defensive skills.

Email ThisBlogThis!Share to TwitterShare to FacebookShare to Pinterest
Labels: arts and leisure, baseball

For weeks, I've been meaning to mention an interesting point about Hollywood and politics that I read in a piece about Contagion and The Ides of March, written by John Powers for The American Prospect:

...as Contagion goes on, you realize that it's doing something so rare as to be groundbreaking. Ever since the '60s, Hollywood has tended to treat U.S. government employees as bad guys--CIA assassins, heartless immigration officers, those mean NASA scientists who try to snatch E.T. (The great exception in recent years, of course, has been the military.) In contrast, Soderbergh's film shows how a Centers for Disease Control and Prevention team headed by Laurence Fishburne, working alongside the World Health Organization (and other one-worlder sleeper cells), goes about stopping an epidemic even as the public panics, the media goes bonkers, and Big Pharma doesn't have a clue. These medical officers do what they need to do--risking, even sacrificing, their lives--in order to set things right. They don't always behave impeccably or according to protocol, but they are the good guys...

Contagion may be the purest expression of Obamaism I've seen on-screen...Rather than revving us up with fears--Globalization is evil! A killer virus is on the loose! Inoculations are worse than the disease!--the movie plays out its scenario matter of factly. Far from laying on the Hollywood melodrama, it's detached, rational, and while highly involving, also deliberately unexciting. The phrase that comes to mind is "no drama."

Like Obama, albeit more persuasively, Contagion expresses faith in public institutions at a time when too many people want to gut them...[G]overnment can hold things together during an outbreak of a deadly virus. In case of an epidemic, the CDC can and will do more to save you than the executives at Pfizer or Merck.

The point Powers makes about war films is very important and shows how much the country has changed since the 1970s when Vietnam films often portrayed the military negatively.

The military has been the most trusted public institution annually since 1998! No wonder the US militarizes campaigns against drugs, criminal terrorism, illegal immigration, etc.

In a few minutes, the Kansas Jayhawks men's basketball team plays against the 2nd-ranked Kentucky Wildcats in Madison Square Garden in New York City. Given that I've been a KU fan since the early 1970s and that I live in Kentucky, I'm excited about the game. These two schools have won more college basketball games than any other school. UK has 14 more wins than KU.

The game has me thinking back to other big KU games -- and wishing I had found a way (like many other fans) to go to NYC for the game. KU fans take KU hoops seriously. An old friend used to attend almost every game in Phog Allen Fieldhouse -- even after she'd moved to Dallas!

In any case, over the years I have attended some memorable KU road games.

On February 21, 1987, I saw KU beat St. John's in Madison Square Garden, 62-60. It was vintage Danny Manning, just a bit more than a year until he led his team to the national championship. Ultimately, his junior-year team lost to Georgetown in the NCAA tournament Sweet 16.

On December 5, 1992, I traveled up to Indianapolis to see third-ranked Kansas beat second-ranked Indiana 74-69 in the now-defunct Hoosier Dome. It was the second game of the season for KU and proved to be the harbinger for a successful season. Indeed, later that season, Kansas thumped Louisville by more than 20 points in Freedom Hall -- a game I also attended. The Jayhawks eventually made the Final Four, but lost to North Carolina in the semi-final game.

On December 12, 2000, the memorable day Al Gore surrendered to George W. Bush, I was in Chicago watching Kansas beat DePaul 75-69. Interestingly, that Kansas team eventually lost in the Sweet 16 to Illinois, coached by Bill Self.

And I think that's it. I have apparently not attended a KU road game in more than 10 years. That's gotta change soon. In January, I almost went up to Michigan for a game -- but didn't.

Tonight was Squashfest in Louisville. Courier-Journal reporter Ron Mikulak, who recently wrote an article about the annual event, was in attendance along with several dozen others -- newbies and veterans alike.

Question from the event: Should published poets get credit for their creative work -- even if the work under discussion is simply a silly Haiku about squash? From the 2010 event:

“Fine. More squash for me.”

My wife and I made a curried pumpkin soup -- though it was a very warm 72 degrees in Louisville today.

Wednesday night, in LA, I attended a taping of the Jimmy Kimmel show. You can probably see my arms at about 20 seconds into this clip of guest Freida Pinto.

She's very skinny. The show was OK, not especially hilarious. Pinto was the only guest actually in the studio that night -- the rest of the show must have been taped at another time.

Trivia: Outside the theater, while waiting in line, I stood near the Buddy Hackett star on the Hollywood Walk of Fame. Just before entering, the line passed stars for Tim Allen and Roger Ebert. Since this was 6834 Hollywood, I missed the markers for Penélope Cruz, Steve McQueen, and Sissy Spacek. 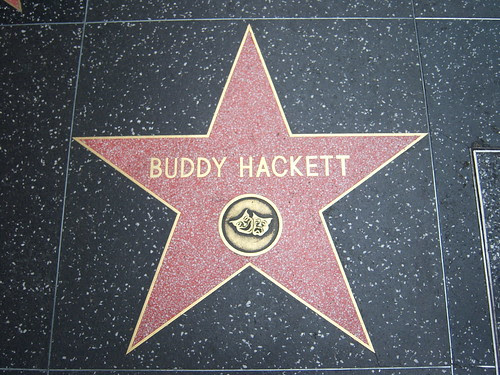 I'm flying to LA tomorrow in order to talk Wednesday at 12:30 pm at USC's Center for International Studies. The talk will focus on elements of my sabbatical project: "The Comedy of Global Politics."

Eventually, I believe a video recording of the talk will appear here.

This is essentially the University press release (with minor edits):

The third annual Floyd Theater French Film Festival will bring five contemporary French films to the big screen between Nov. 3 and 18, four of which have never been screened in Louisville.

The festival marks the Louisville debuts for “White Material,” “Of Gods and Men,” “Carlos” and “Making Plans for Lena.”

Films are free and open to the public thanks to a Tournées Festival grant supported by the French government and secured by Matthieu Dalle, UofL department of classical and modern languages.

A full schedule, descriptions of each film, parking directions and other information, is online.

Sponsors for the Floyd Theater French Film Festival include the French section of the Department of Classical and Modern Languages, Student Activities Board and Class Act Credit Union.

I was really hoping to see "A Prophet," but I'll be in LA next week speaking at USC. I'll try to check out one or two of the other films instead.