My youngest daughter took this picture earlier this month.

The word she uttered to get them to pose? Treat. 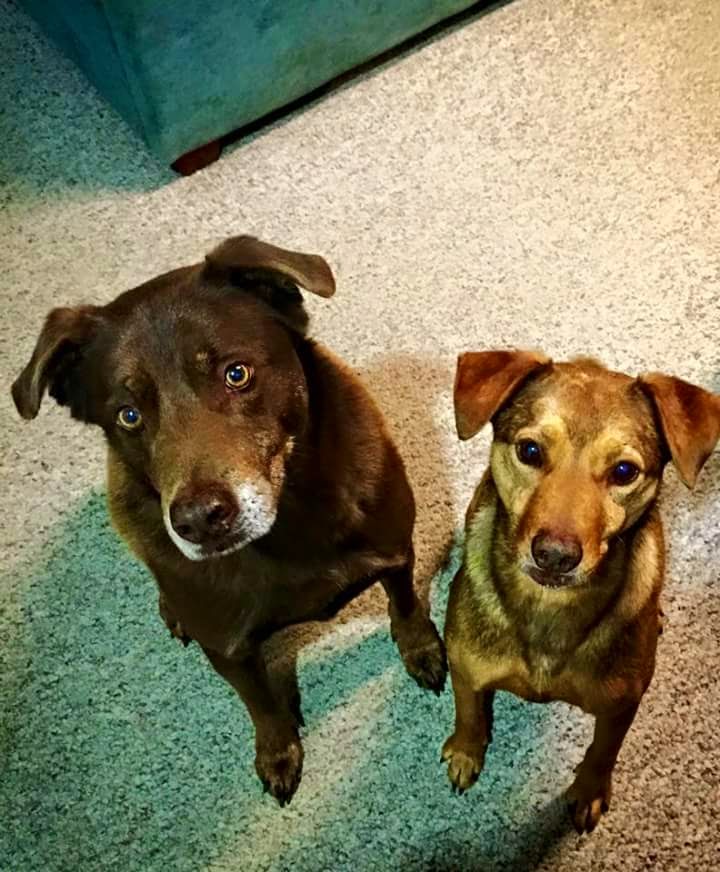 That's Robey on the left and Paddy on the right.

Today was SABR Day 2015, an annual Saturday in January event featuring local SABR chapter meetings across the United States. I attended the one in Louisville at 10 this morning.

The guest speaker was former major league player Chris Burke, who delivered a worthwhile presentation.  I especially appreciated the fact that he answered our questions fairly directly, even when they involved controversial subjects such as steroid use in baseball.  Burke grew up in Louisville, played his college baseball at Tennessee (All-American SS on the runner-up College World Series finalist team) and then had a fairly significant role on a Houston Astros team that made the World Series in 2005. In the NLDS that season, he hit the series winning home run in the 18th inning of game 4.

After Burke finished and departed, I gave a presentation: "Can Small Market Teams Compete? Revisited." That link takes you to my PowerPoint. As the title suggests, this was a much updated version of a talk I gave to the same local SABR chapter in April 2000.

My 2000 presentation focused on the Oakland A's, much as Michael Lewis did in his 2003 book Moneyball. However, today's talk focused on the 2014 Kansas City Royals, the first small market team to make the World Series since Cleveland did it in 1997. For my talk, I defined the smallest handful of cities as small market: Milwaukee, Kansas City, Cleveland, Cincinnati and Pittsburgh. Oakland shares the Bay area with San Francisco, but is often viewed as small market.

Readers probably noticed the new banner and other minor blog updates -- the former made fairly easily thanks to Picmonkey. Once again, the photos are courtesy of government websites, so should not involve any copyright issues:

I attended this talk by Samantha Power on Monday at the University of Louisville:


I'm not sure UN Ambassador Power said anything really new about American foreign policy, but news reports tended to emphasize two points -- her call for bipartisan foreign policy and her argument against new Congressionally-imposed sanctions on Iran.

If you were not paying close attention, her arguments about the value of economic sanctions seemed to be inconsistent. She criticized the economic embargo against Cuba, claiming that after more than 50 years of failure, the Obama administrations simply wants the U.S. to try a new approach. Yet, at the same time, she praised the success of economic sanctions against Burma (a pet issue of host Senator Mitch McConnell) and other recent sanctions against Iran.

Power argued that unilateral sanctions on Cuba had failed, while collective sanctions on Iran had succeeded. She didn't really talk about this distinction vis-a-vis Burma, but I know the EU also sanctioned Myanmar (Burma). On Cuba:


Even though the Castro regime has been repressing the Cuban people for decades, it is America that has been seen as Goliath picking a fight with David. I’ve seen this first-hand at the United Nations. Last October, for the 23rd year in a row, the UN General Assembly voted overwhelmingly to condemn the U.S. embargo on Cuba. Out of the UN’s 193 member-states, we were only one of two that voted to defend the embargo.

As for Iran, Power argued that the international sanctions regime is largely responsible for bringing Iran to the bargaining table, where it seems willing to limit its ability to produce nuclear weapons. However, new sanctions would backfire, undermining the collective sanctions that she claimed are "exponentially more effective than bilateral sanctions alone."


If we pull the trigger on new nuclear-related sanctions now, we will go from isolating Iran to potentially isolating ourselves. We go from a position of collective strength to a position of individual weakness.

All of these points were framed around a theme of bipartisanship. Power repeatedly emphasized that Republicans and Democrats in Washington fundamentally agreed about the goals of American foreign policy, even as they disagreed about the means to achieve them:


But what is often lost in the coverage of these debates is the fact that they’re disputes about means, not ends; about tactics, not objectives; about how America can tackle complex global challenges, and not whether we ought to try. As Thomas Jefferson once put it, “Every difference of opinion is not a difference of principle.”

In the introductory remarks, University of Louisville President James Ramsey introduced a visiting Army War College Fellow who is auditing my graduate IR seminar this spring.