The University of Kansas debate team of Brett Bricker and Nate Johnson has won the 2009 National Debate Tournament in Austin, Texas. They defeated defending champ Wake Forest in the final round on a 4-1 decision.

Congratulations to Brett and Nate (nice guys who I met at the last KU debate reunion), to Coach Scott Harris, and to everyone associated with the program. Debate is truly a team activity and winning NDT takes a great deal of hard work.

This is just terrific news.


Visit this blog's homepage.
Posted by Rodger A. Payne at Tuesday, March 31, 2009 No comments:

From the Kenyon College PR Department:

President S. Georgia Nugent has announced the appointment of Nayef H. Samhat to the position of provost. Samhat is the Frank B. and Virginia B. Hower Associate Professor of Government and International Studies and associate dean at Centre College in Kentucky. He will begin work at Kenyon on July 1.


Visit this blog's homepage.
Posted by Rodger A. Payne at Wednesday, March 25, 2009 No comments:

The Legitimacy of Preventive War?

Many other speakers during the seminar look first-rate too, but those links above direct you to instances where I've previously mentioned the named individuals on this blog.

Each of the sessions is organized as a pro and con debate. I'll be speaking on the same platform as Whitley Kaufman of University of Massachusetts at Lowell. This is the abstract from one of his pieces on preventive war:

The question of the legitimacy of preventive war has been at the center of the debate about the proper response to terrorism and the legitimacy of the Iraq War. One side has argued that preventive war is a legitimate and necessary tool for nations to use in defense against terrorists; the other side has claimed that war is permissible only in self-defense, and that therefore the preventive use of military force is unjustified both legally and morally. In this essay I attempt to clarify the terms of this debate by demonstrating that neither side is precisely correct. Both under Just War Doctrine and common sense morality, preventive war is indeed justifiable, so long as it satisfies the basic requirements for going to war such as necessity and proportionality. However, under the current international law regime governed by the United Nations Charter, the use of preventive international force is restricted to the Security Council alone. Individual nation states are permitted to use international force only in self-defense. The rise of international terrorism does not by itself change this situation; preventive force against terrorist organization is permissible and appropriate, but it must be authorized by the Security Council in order to be legitimate. Only if the Council proved wholly ineffective in exercising its authority would the right to preventive war revert to individual nations. For all the shortcomings of the United Nations, however, I argue we have not reached a state of total breakdown of international authority sufficient to justify a return to the legitimacy of unilateral preventive war.

Though I'll be speaking against the legitimacy of preventive war, I've argued that it can be legitimately prosecuted by the international community if authorized by the UN Security Council.

Kaufman seems to oppose preventive war in many circumstances, so we'll have to figure out the points of disagreement in our positions.

Note to local in-laws and others potentially interested: the sessions are free and open to the public.


Visit this blog's homepage.
Posted by Rodger A. Payne at Saturday, March 21, 2009 No comments:

This is my 2009 NCAA basketball tournament bracket.

As you can see, I picked Kansas to lose to West Virginia very early in the tournament. Those late season losses to Texas Tech and Baylor have me spooked and West Virginia is a very good team. 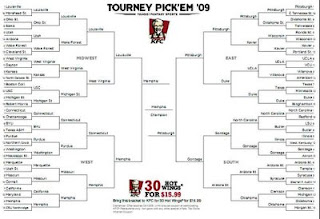 
Visit this blog's homepage.
Posted by Rodger A. Payne at Thursday, March 19, 2009 No comments:

Today, at Duck of Minerva, I blogged "Academia and 'JournoList,'" which discusses a left-leaning listserv for journalists, policy wonks and academics. Are you, or have you ever been a member...

March 7, I blogged "Israeli threat inflation?" The post is about whether Iran has crossed a nuclear threshold on the way to making weapons.

Visit this blog's homepage.
Posted by Rodger A. Payne at Wednesday, March 18, 2009 No comments:

Are you paralyzed by the financial crisis and sagging economy? Consider this, from Jonathan Schell (author of The Fate of the Earth):

Paradoxically, the recession, by cutting back on fossil-fuel use, may have done more to ease global warming than electric cars or solar panels could have done in a comparable period.

Many worry that recession reduces spending on green energy and diverts government attention from the environment to the economy. In the developing world, greater poverty likely forces some people to turn to slash-and-burn practices that hasten deforestation.

The Republic of Texas

Chuck Norris is apparently thinking about running for the presidency -- of Texas.

In anticipation, I'm registering FiveOhFour.org any day now and plan to use the first post to explain how Republicans cannot hope to get to 253 EVs in the age of Obama.

In 2004, Bush-Kerry would have tied 252-252 without Texas. Though Bush might have won Maine as a native son in that election, it is more likely that neither candidate would even have been on that ballot. After all, Gore2000 would have prevailed 267-239 (Texas gained two EVs in 2004).

The second post on my new site will explore the implications for the Senate, where the Republican caucus will lose 2 reliable votes.

If he pulls this off, Chuck Norris is a genuine American hero.


Visit this blog's homepage.
Posted by Rodger A. Payne at Wednesday, March 11, 2009 No comments:

Support the Arts in Louisville

Check out "Spoon River Anthology" by the As Yet Unnamed Theatre Company at the MEX Theatre in the Kentucky Center for the Arts. Showtime tonight and next Friday/Saturday is 8 pm and there are matinees the next two Sundays at 2:30 pm.

The cast includes my daughter Cate. And yes, she did just finish the Lincoln plays.


Visit this blog's homepage.
Posted by Rodger A. Payne at Saturday, March 07, 2009 No comments:

The week in review

Monday, I managed to blog "Iran's bomb" at Duck of Minerva.

Tuesday, I attended a luncheon for the Executive Committee of the Louisville Committee on Foreign Relations. I'm supposed to try to recruit a couple of new members, so local readers might want to let me know if the group sounds interesting.

Tuesday, the Grawemeyer World Order award winner arrived in town and I was fairly busy with related events. If you missed seeing or hearing Michael Johnston when he was here, check out the audio stream of his WFPL "State of Affairs" interview, a podcast video interview with university PR people, or (eventually) a video podcast of his excellent lecture.

Friday, I chaired a panel at the Kentucky Political Science Association Annual Meeting. I presided over the delivery of two interesting papers -- one by Louisville's Visiting Aung San Suu Kyi Endowed Chair Bob Bedeski on "The Genealogy of Modern Asian Dictatorship: From Chinggis Khan to Kim Jong Il" and one on "Peace through Trade: Can the Dragon be Tamed?" by Jim Masterson of Morehead State.


Visit this blog's homepage.
Posted by Rodger A. Payne at Saturday, March 07, 2009 No comments:

Michael Johnston of Colgate University in Hamilton, N.Y. will speak March 5 at 11 a.m. in Chao Auditorium, Ekstrom Library. He won the world order award for his analysis of how corruption develops and how to stop it.

Johnston will also be the guest on the "State of Affairs" radio program, Wednesday, March 4, at 1 pm ET (and rebroadcast again at 9 pm).

In fact, anyone with an internet connection can listen to the show on public radio station WFPL's live stream.