This post is tied to a forthcoming SABR publication focusing on the history of baseball's winter meetings. I wrote the chapter on the 1992 meetings held in Louisville, KY, December 3-9. The meetings featured a number of very prominent free agent signings, including two of the biggest stars of the last quarter century.

While I wanted to discuss how well those deals worked out based upon on-field performance of the players, the editors preferred that I focus exclusively on the events of the meeting. This post includes the research I conducted for the chapter that will not be included in the published piece. However, by mutual agreement, the piece will reference this blog post.

These are the prominent player signings, in order they appear in the chapter:

Greg Maddux: In each of the three seasons following his signing by the Braves, from 1993 through 1995, Maddux won the National League ERA title, the Gold Glove for pitchers, and the Cy Young award (the latter two times unanimously). He also led the league in innings pitched during those seasons, as he also had in 1991 and 1992. Put simply, Maddux was the best pitcher in the NL through this period and added to a record that would ultimately position him among the game’s all-time greats. Ultimately, the 2014 Hall of Fame inductee achieved 194 of his remarkable 355 career victories in a Braves uniform. The Braves won their division title in 1993, won the World Series in 1995, and qualified for the playoffs during every season Maddux pitched for the team – save for the 1994 season, which did not include a postseason. During the five years covered by the contract Maddux signed at the 1992 winter meeting, the pitching star remarkably accumulated an average of eight wins above replacement (WAR) per season. Using traditional statistics, he was credited with 89 wins against only 33 losses and posted a 2.13 ERA during the period.

Bobby Bonds: Bonds, of course, is one of the most controversial players in recent baseball history largely because of his eventual association with the Bay Area Laboratory Cooperative (BALCO) and the tremendous offensive statistics he accumulated late in his career. A number of high profile successful athletes tied to BALCO were ultimately accused of using designer anabolic steroids and other performance enhancing drugs. Allegedly, Bonds turned to BALCO after the 1998 season when sluggers Sammy Sosa and Mark McGwire both surpassed the single-season home run record. The contract Bonds signed in 1992 extended only through that 1998 season. The left fielder won the MVP for his new team in 1993, was selected as an All-Star in every season covered by the contract, and averaged 39 home runs and 110 RBIs over those six seasons. Bonds also won the Gold Glove in each of those years, other than 1995. He hit for a .307 batting average, attained a .445 on-base average, and slugged .617 during the life of the contract. The 1997 Giants won the NL West, but lost in the first round of the playoffs. During those seasons, Bonds also accumulated a whopping 50.8 WAR, or nearly 8.5 per season. Largely because of his late career association with BALCO and steroids accusations, Bonds has not been elected to the Hall of Fame.  The seven-time NL MVP retired with a major-league-leading 762 home runs.

Andre Dawson: Somewhat disappointingly, Dawson hit only 39 additional home runs in his career, including 29 for the Red Sox. Because of age and declining health, Dawson mostly played as a designated hitter for the Red Sox. He managed 20 appearances in the outfield during 1993 and none in 1994. During this inflated offensive era, over 70 major-league players hit more home runs than Dawson managed during those two seasons. Boston finished fifth and fourth in their division during the two contract years.

Paul Molitor: During the first two years in Toronto, the 36 year old Molitor paid immediate dividends, compiling batting averages of .332 and .341, on-base averages of .402 and .410 and a slugging percentage of .509 and .518. Molitor finished second in the MVP voting in 1993 and was named World Series MVP. Molitor retired after the 1998 season and was inducted into the Hall of Fame in 2004.

Kirby Puckett: Puckett played three more All-Star seasons for the Twins, hitting over .300 through the contract and leading the league in RBIs in 1994. Unfortunately, Puckett was forced to retire abruptly from the game late in spring training in 1996 when he developed glaucoma and lost vision in his right eye. He was inducted into the Hall of Fame in 2001 and died in March 2006 after suffering a stroke.

Ozzie Smith: Smith enjoyed two more years as a regular shortstop and made three All Star teams before his career ended with the 1996 season. He was inducted into the Hall of Fame in 2002.

Joe Carter: Carter would continue to be a fearsome slugger and finished 12th and 10th in MVP voting in 1993 and 1994, respectively. Most memorably, Carter hit the 1993 World Series clinching three-run home run in the bottom of the ninth inning of Game Six.

Greg Swindell: Swindell started 84 games for the Astros during the length of that contract, compiling a 30-34 win-loss record and a 4.48 ERA.

Dave Stewart: Stewart went 12-8 as a member of the World Champion Jays team in 1993, with a 4.44 ERA. He was named the MVP of the American League Championship Series after winning two games during that series. Stewart did not pitch nearly as well in two starts in the World Series against the Philadelphia Phillies and his 1994 ERA ballooned to 5.87 in just 22 starts.

Todd Worrell: Worrell did not assume the high-profile closer role until the final year of his contract when he recorded 32 saves and had a 2.02 ERA During the first two years, his age 32 and 33 seasons, Worrell saved only 16 games and had seasonal ERA totals of 6.05 and 4.29 in about 40 innings pitched per year.

Randy Myers: Myers had been San Diego’s primary relief ace and he would lead the NL in saves for the Cubs in two of the next three seasons. His ERA also approached 4.00 in two of those three seasons. In his best year, 1993, Myers finished eighth in the National League Cy Young voting.

J.T. Snow: Over the next four years, Snow hit 65 home runs in almost 2,000 plate appearances for the Angels, with an OBA of .330 and a slugging percentage of .410. He would win two gold gloves for the Angels.

I went to Jim Patterson stadium today to see the Louisville Cardinals beat the North Carolina State Wolfpack 6-1 in baseball. Both teams are ranked in the top 10 and have decent chances of playing in Omaha this summer.

The Cards started former ace (and very high 2015 draft pick) Kyle Funkhouser. He went 7 strong innings, yielding only 1 run, 2 hits, and 3 walks in 7 innings plus. He struck out 8 batters and looked fairly impressive, though the walks have been an issue for him. His fastball was consistently 93-94-95. He walked a batter in the first to get in trouble when a called strike that was called ball four would have yielded a strike out-caught stealing double play. He also walked the last batter he faced, which yielded the one run he allowed. 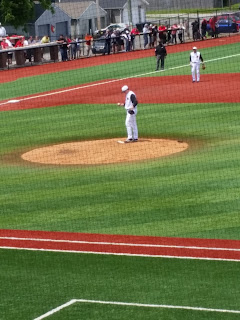 NC State's offense didn't do much, but their first baseman is Preston Palmeiro, son of Rafael: 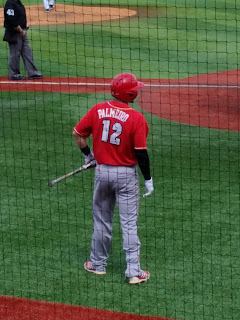 Their shortstop today was Joe Dunand, nephew of Alex Rodriguez. A lot of his mannerisms seem borrowed from his uncle. 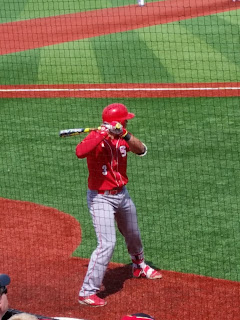