My spouse told me about a quiz that Vanity Fair has on its website: "Oberlin College Newspaper or Pope Francis’s Anti-Capitalist Apostolic Exhortation?"

Here are a few of my favorites:


B. “To all this we can add widespread corruption and self-serving tax evasion, which has taken on worldwide dimensions. The thirst for power and possessions knows no limits.”

D. “Human beings are themselves considered consumer goods to be used and then discarded. We have created a ‘disposable’ culture which is now spreading. It is no longer simply about exploitation and oppression, but something new.”

G. “It is evident that unbridled consumerism combined with inequality proves doubly damaging to the social fabric.”

J. “The dual crises of the capitalist economy and the planetary environment are systemic, paradigmatic and deep.”

Click the link for the answers -- and for the rest of the quiz.

Disclosure: we have a daughter at Oberlin.

At a lazy pace, I've been reading chapters of Scorecasting: The Hidden Influences Behind How Sports Are Played and Games Are Won by Tobias Moskowitz and L. Jon Wertheim. The book was marketed as Freakonomics for sports fans and there is a lot of truth in that description. The authors use tools of behavioral economics and apply them to various sports-related questions.


"Home field advantage exists in every sport, at all times in history, and in all geographies," said Moskowitz, Fama Family Professor of Finance.

"And it's remarkably consistent," he added, citing statistics from the five most popular team sports—football, basketball, baseball, soccer, and hockey. In basketball, for example, both NBA and WNBA teams win about two-thirds of the games that they host. In baseball, the home team prevails roughly 54 percent of the time, whether it's an MLB game or played in Japan.

In addition to the consistency of player performance in different venues, they similarly dismiss other possible causes of the advantage, including fan enthusiasm (at least not the conventional interpretation) and travel. Basically, Moskowitz and Wertheim find that referee/umpire behavior is at the root of a significant portion of home field advantage.


"We don't think this is conscious," said Moskowitz, who built on previous studies of soccer referee bias to uncover the connection to home field advantage. The cause, he says, is physchological [sic], and in particular, related to social conformity.

In high-stakes game situations before making a split-second decision, referees seek both information from fans—and their approval.

I am especially interested in baseball and their results ostensibily explain much of the home field advantage in my favorite sport:

Fear of blowing a call can cause referees to look for ways to "relieve some of that presure," Moskowitz said, "of having 50,000 screaming fans yell at you."

And the calls affect the scoreboard. In baseball, Moskowitz examined the strikezone and estimated that visiting teams receive 516 more strikeouts and are issued 195 fewer walks from home plate umpires over the course of a season.

"If you add up how much this is worth in terms of runs scored and everything else, that can explain a sizeable chunk of the home field advantage in baseball," said Moskowitz.

Spoiler alert: the book presents evidence finding that umpire bias disappeared in baseball games in stadiums that major league baseball had rigged to use QuesTec to evaluate umpire performance. Actually, umpire bias didn't disappear -- it moved in the opposite direction and created a substantial road team bias on ball-strike calls. They refer to this evidence as the "smoking gun" and find that other indicators of home field bias did not shift since Ques Tec was only monitoring ball-strike calls at home plate.

However, to me this finding completely deflates the psychological conformity thesis. Umpires must have known about the data finding home field ball-strike bias and then intentionally changed their behavior to correct for the problem. This makes the result conscious.

A few years ago, a study found that umpires were slightly more favorable calling balls and strikes for pitchers of their same race. Again, however, the presence of QuesTec eliminated this bias.

The chapter made me think about other situations that could be compared. If scrutiny from QuesTec diminished umpire bias, what about the extra scrutiny of post-season play in the instant replay era? Does Tim McCarver's commentary work to decrease umpire bias? What about the possible differences in highly scrutinized televised games during the regular season versus obscure games played without so many viewers? The Yankees and Red Sox play many more TV games than do the Royals and Pirates.

If home field noise provides pressure to influence umpires, is there more bias in years when small market teams draw sizeable crowds? How about a study of bias in Twins games during years when the team draws about 1 million fans versus the years when they draw 3 million?

Phil Birnbaum has a strong critique worth reading.

This weekend, I attended a number of retirement events in honor of Donn W. Parson, who was my college debate coach. Known as the Head Jayhawk, he worked at the University of Kansas for 48 years. During half of those years, he was Director of Forensics. For another twenty years, he directed the graduate program.

In this picture, the HJ can be seen with me, his spouse Andi, and my former debate partner, Mark Gidley: 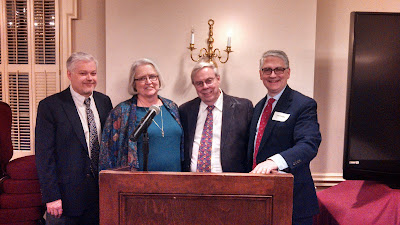 Incidentally, the Parson Wikipedia entry I linked above includes an outrageous claim:


Parson coached KU to National Debate Tournament (NDT) championship in 1970, 1976, and 1983 (although the legitimacy of this title is being increasingly questioned).

In 1983, Mark and I won the National Debate Tournament. We have the trophy, the gift watches, etc. The Dartmouth B team finished 8-0 in the preliminary rounds and was slated to debate the Dartmouth A team in the semi-finals. Ken Strange, the Dartmouth coach, elected to advance the senior A team and Mark and I beat them by winning 4 of 5 judges' ballots.

I don't know who is questioning the legitimacy of the decision, nor who made this entry into Wikipedia, but no team wins a national championship by providing another team a walkover in the semi-finals. That counts as a loss for the purposes of making the tournament bracket work. 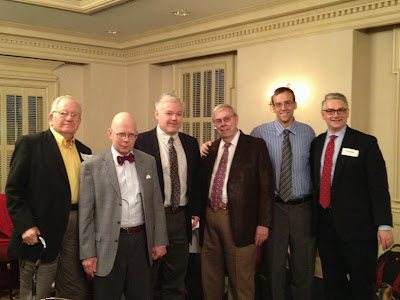