I'll post my bracket here in the next 48 hours. Meanwhile, I encourage readers to join me in the Yahoo! Sports Tournament Pick'em group, "Payne Twitter-Blog Followers": y.ahoo.it/8M1iywX0

I'm not sure if I have to provide more detailed sign-in information or not. The name of the private group is "Payne Twitter-Blog Followers" and the group slogan is "Good luck to Kentucky in the NIT." The group, which uses the standard Yahoo! scoring system, can be found among the various groups associated with Kansas. Rock chalk!

Again, I don't know if you need a password to join, but you may need a Yahoo! account.

This is my bracket for the blog group. I picked Kansas to win the tourney in a different one for ESPN. 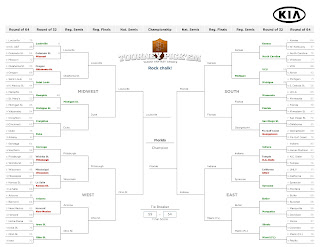 For many years now, I've been involved with sustainability initiatives for the University of Louisville. Back in 2007, for example, I became a university member of a Utility Regulations, Policies and Procedures Subcommittee of the Climate Change Committee working under the Partnership for a Green City. We produced a Climate Action Report in 2009 for the city of Louisville.

I was also listed as a member of the Education and Outreach Subcommittee, but I honestly didn't attend many of their meetings. The Education group included many individuals who had already worked with the Honors program to develop a number of new classes on campus. I taught on Honors seminar on "The Geopolitics of Climate Change" in fall 2007 and then used that class to reorient my regular Political Science course on Global Ecopolitics.

While serving as Acting Department Chair in 2007-2008, I joined with Barbara Burns (chair of Psychology at the time) and a number of other interested faculty and staff at UofL to form the A&S "Green Team." We met regularly to discuss initiatives that are now often taken for granted at the University: a vastly improved recycling program, energy conservation measures, a free bike program, etc. We talked a great deal about behavioral programs, but limited resources precluded implementation of many of them. Still, we helped conduct multiple programs on climate change, promoted simple energy conservation measures, audited energy use in 700 A&S offices, created a model green dorm room, etc. The Green Team's “12 by 12” energy conservation plan aimed at reducing energy use by 12% in 2012 from a 2006 baseline.

Most importantly, under the leadership of Barb Burns, Russ Barnett, Joy Hart, and other members of the A&S community, the group helped pressure the University to create a Sustainability Council. Barb Burns was the first chair of that group and I succeeded her as head of the "Green Team" in 2009. The A&S group continued to meet for about a year or so, but it quickly became apparent that the need for the group had been largely met by the Sustainability Council. University-wide budget cuts forced A&S into some difficult budget cuts and the Green Team suffered for it.

In any case, virtually the entire leadership group for the Green Team became members of the Sustainability Council. I was named to the Sustainability Council and its Administration, Finance, and Outreach Committee in 2009 -- a group that I have chaired since fall 2012. In a related development, I served next on the Provost's Ad Hoc committee on Socially Responsible Investing. We produced a document recommending a number of specific changes in the University's money management, but the followup has been slow in coming.

This January, however, the Operations Committee reported some of the University's major successes:


A long-term project to save energy at UofL is outpacing its original goals, according to a progress report released last week. Belknap Campus fuel use dropped 48 percent while electricity and water use dropped 27 and 31 percent, respectively, from their annual usage before the project started...

The reported energy savings is from 2011, the first full year after workers installed more efficient lighting; updated heating, cooling and ventilation systems; and found ways to cut water consumption in 71 campus buildings and outdoor areas. The overall reduction in energy use has trimmed the greenhouse gas emissions emitted on Belknap Campus by an annual 53 million pounds — an amount equal to removing 4,400 cars from the road for a year, Siemens officials said.

Though those documented gains are attributed almost exclusively to a service contract with Siemens Industries, at least some of those energy savings should be credited to behavioral initiatives promoted by the A&S Green Team. Of course, there is room for more to be done. The University aims to reduce greenhouse gas emissions by 20% by 2020 and wants to be carbon-neutral by 2050.


I managed to attend five University of Louisville basketball games this season -- home games versus Syracuse (a tough loss), Marquette, Pittsburgh, Cincinnati, and Notre Dame. In the two games last week, the home Cardinals essentially destroyed their opponents with smothering defense and timely shooting. In Saturday's game, the Cards atypically didn't even attempt a three-point field goal in the first 7 or 8 minutes of the game. Instead, they took the ball inside and made easy baskets.

It is very difficult to return to the Final Four, but this year's Louisville team seems to have the ability (thanks largely to that terrific defense).

Meanwhile, Kansas got walloped in a road game at Baylor. I didn't see the game, but based on my halftime check-in, it appears the defense completely broke down in the second half. Oh, and KU seemed to have rare foul trouble. Kansas too could return to the Final Four, but that's hard to write on the heels of their worst loss since 2006.


Cash would have been 81 last week.