For the 26th consecutive year, I'm competing in the Hardy House fantasy baseball league. Our auction draft was held two Saturdays ago, April 5, in Washington DC. Two owners participated by phone and we welcomed one new owner even as we missed a long-time participant who had said goodbye. As I previously blogged, nearly the entire group took in a Nats game after the auction, which included a first-class meal and some free local beer. The Friday night before the draft, many of us ate BBQ and drank some other local beer.

As a reminder: the league has 12 teams and uses American League players exclusively to accumulate statistics in various hitting and pitching categories. For 22 years, we tabulated results in the traditional 8 categories (HR, RBI, SBs, Batting Average, Wins, Saves, Earned Run Average and ratio/Walks-plus-Hits per Inning Pitched), but in the hot stove period prior to the 2011 season we voted to dump BA in favor of On Base Average. Also, we added runs scored (R) for hitters and strikeouts (K) for pitchers.

My 2013 team again finished second, 4.5 points behind the championship squad (Repeat Offenders). Last year's Bolts from the Blue squad led the league in saves, but got most of its points from the league's best offense. It finished first in steals, 2nd in runs, third in OBA and RBI, and 4th in home runs. The team was middle of the pack in most pitching categories (5th in wins and ERA, lower in the other two).

I always mention another roster quirk now in its seventh year: we use 10 man pitching staffs, but only 4 outfielders -- one fewer than the "normal" roto squad. We continue to believe that this better reflects roster management decisions that real major league baseball teams have made over the past 20 years. However, the owners discussed dropping the traditional second catcher in favor of a utility player. Some owners want this hitter to qualify at a position, while others think this will serve as an avenue to acquiring two designated hitters. It will likely be decided prior to next year's competition.

As usual, we allowed the purchase of any player on an American League 40 man roster. After the auction, only players on 25 man active rosters or the major league Disabled List (DL) can be obtained. We now allow teams to retain ownership of players sent packing to the National League -- but only for the remainer of the current season. The league uses a salary cap, but it expires after the trade deadline. This means contending teams can spend their free agent cash in September.

Several teams mismanaged their cash throughout the auction, which meant inflation was quite a bit lower than it might have been. Indeed, these teams never found a way to spend $90! Individual teams finished with enough money ($22 and $23) to purchase two star players and other teams finished with $16, $10 and $9. The Bolts spent every dollar this year, but I cringed at some of the big bargains that were available at the end of the auction. Because of positional scarcity and roster mismatches, the teams with money could not find places to spend it all and many outfielders sold for a fraction of their auction value.

Pre-auction, my team was hurt by the fact that I could not retain relatively inexpensive starting pitcher Ervin Santana, who toiled for KC last year, but now pitches in the NL in Atlanta. He would have cost me $9 if he had remained in the AL. Additionally, I decided not to retain the highly touted Profar because of his spring training shoulder injury. The injury is supposed to sideline the middle infielder for 10 to 12 weeks. He would have cost $11 in 2014, but by buying him for just $10, I saved $1 this year and added a third potential year to his contract. Under our rules he will cost $13 next year and $16 in 2016. Had I retained him, Profar would have cost $14 in 2015 and been a free agent in 2016.

I kept Jones because he was deemed the favorite for the White Sox closer job in the spring. His injury came to light after our freeze lists were due. Indeed, he pitched during the first week of the season -- he just didn't get anyone out. Literally, he surrendered 2 hits, 3 walks and four earned runs in 2 early April appearances, giving him an ERA and WHIP of infinity. To compensate for the lost job, I bought Mujica, Feliz, and Cook because they have each served as closers in the recent past and are on teams with old or iffy guys in front of them.

Actually, my team has its share of old and iffy guys. My "reliable" closer Janssen also started the season on the DL and his minor injury has now yielded exactly one inning in a minor league rehab appearance. Afterwards, he was shut down and will not come back for at least a couple more weeks.

Obviously, my team has even more badly damaged when Moore injured his elbow in his second start. He's now out for the year with Tommy John surgery in his near future. Rays teammate Alex Cobb pitched very well in his first 3 starts, but injured his oblique and is out 6 to 8 weeks. Several other Bolts have now been injured (marked with ** above) and the team currently has 7 players on the major league DL (and 2 others who are day-to-day with minor injuries). Unfortunately, Hardy House rules allow only 5 reserve or injured players.

As usual, I bought several players from the KC Royals (3), the hometown-favorite team of my youth. I've got mixed feelings about Moustakas, but he had very good performance in the winter league and in spring training. Gordon has been a solid hitter for several seasons now. Davis has always pitched much better in his career out of the bullpen than as a starter. Indeed, his ERA pitching in relief is about half of his ERA as a starter. I could not buy long-time Bolt Billy Butler because DH Ortiz was retained.

Altuve, Moustakas, and Profar were on my 2013 team and I bought them again for lower salaries than they would have cost as retained players.

To replace initially injured players Profar, Feliz, and Jones on my active roster, I bought MI Ryan Flaherty (BAL), P Dustin McGowan (TOR) and P Dan Otero (OAK) for $1 each.  I also nabbed OF Craig Gentry (OAK) and hard throwing P Michael Tonkin (MIN) (during the second week) for $1 to replace the injured Arcia and Moore. The Bolts are going to need a quality starting pitcher to replace Moore and Cobb, but the free agent pool is currently lacking in that regard.

As I've often noted over the years, I've competed in a 12-team American League fantasy baseball league with the same basic group of guys for 26 years. This year, we conducted our annual player auction in Washington DC at a hotel a couple of blocks from the Washington Nationals ballpark. The auction was held last Saturday, April 5. We began at 9 am and finished by about 4 pm (which is early for us).  Unfortunately, two guys fad to purchase players via long distance teleconferencing.

I'll post my roster soon. This post is actually about the baseball game we attended that evening -- a Nats game versus the Atlanta Braves, featuring young aces Stephen Strasburg and Julio Teheren. The Braves won 6-2. It was kind of a chilly evening with a pretty strong wing blowing mostly left to right, but sometimes in towards home plate.

One of the league members played host and he managed to get a fairly significant discount on President's Club seats for our group. Full price for these seats is $225, so I felt like a member of the 1% for an evening. Here's my ticket stub: 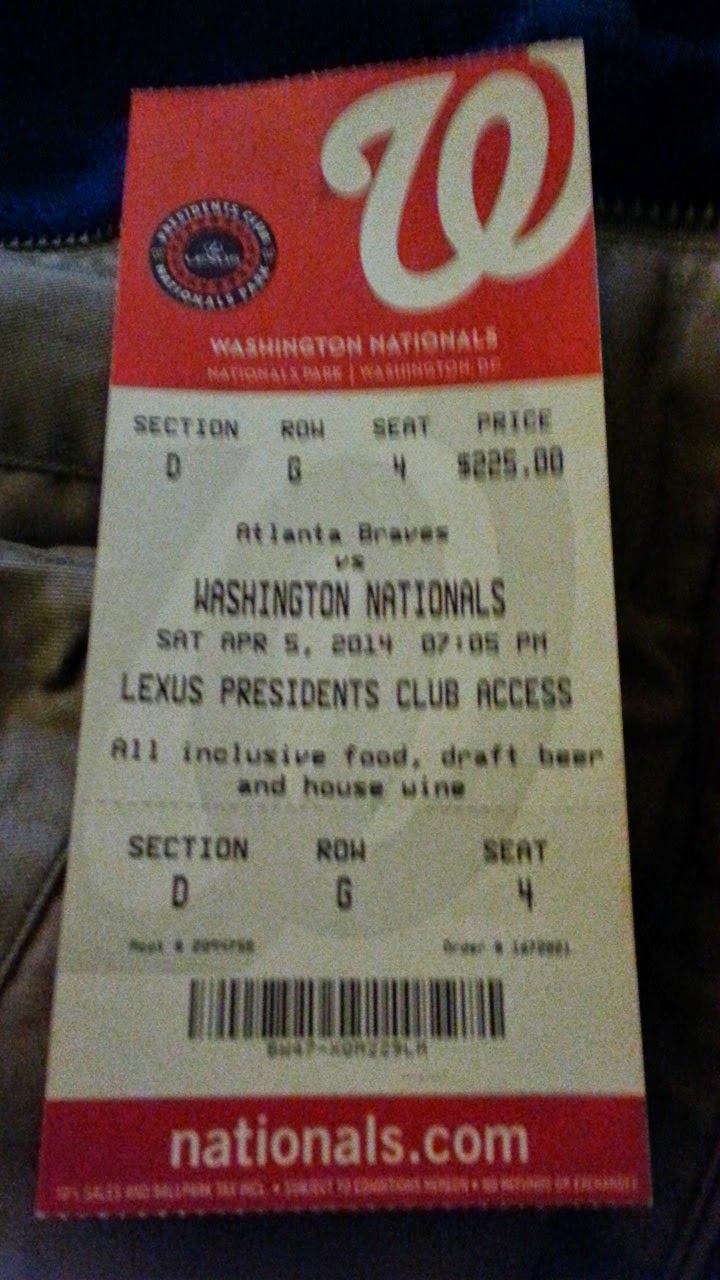 These Club seats are located in the closest sections directly behind home plate. I was sitting in about the 7th row very slightly on the Nationals' side of the infield. I took these two photos during the first inning. On the left is Braves leadoff hitter Jason Heyward walking to the plate to face Strasburg. On the right is Bryce Harper in the on-deck area : 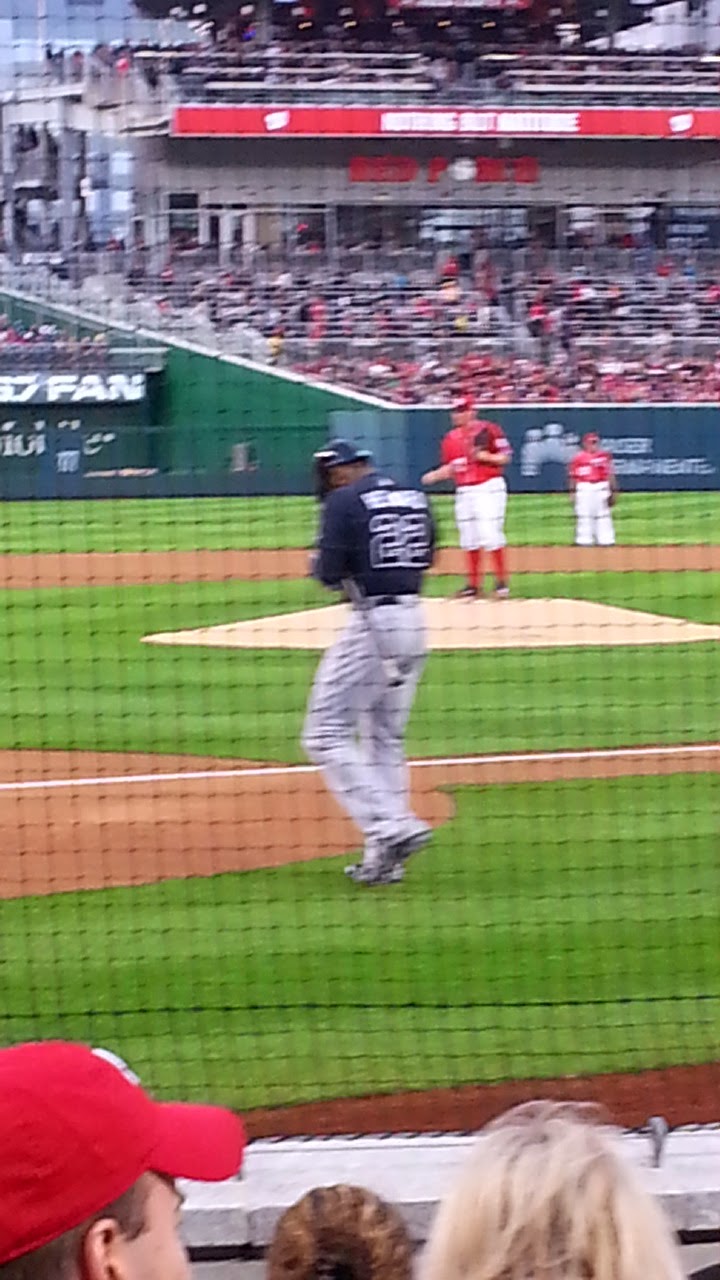 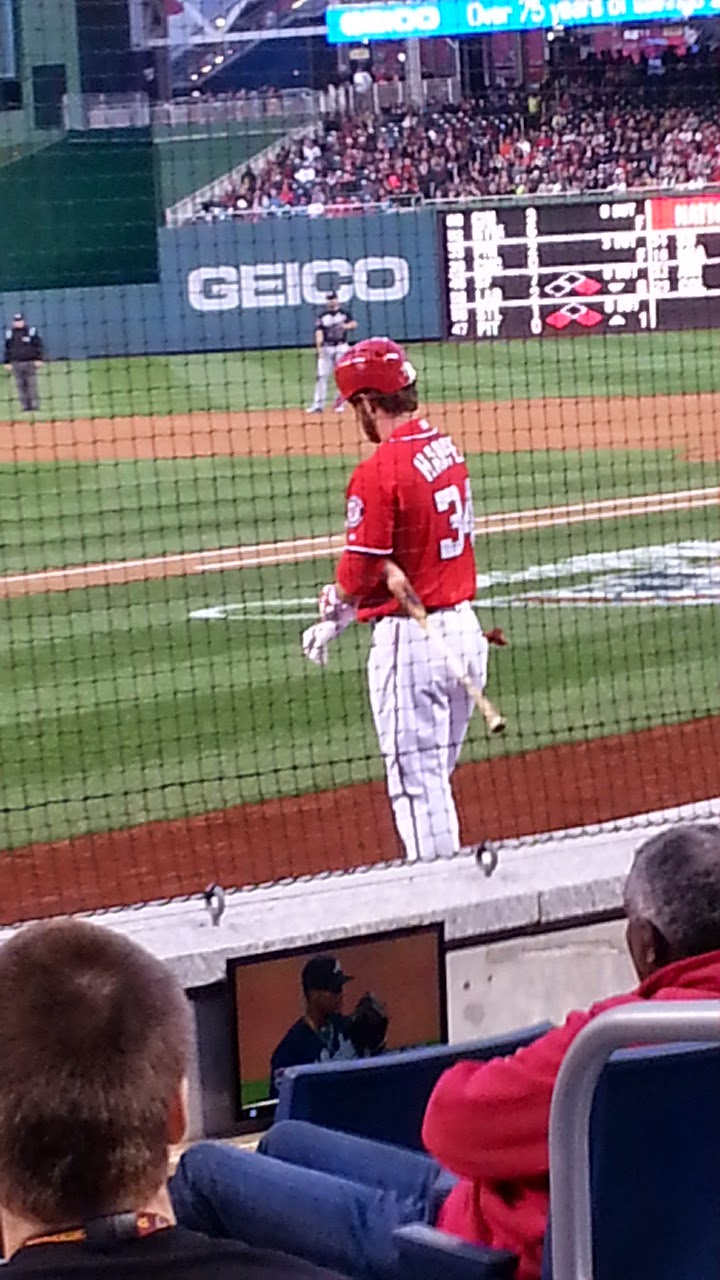 The tickets included a pre-game meal that was simply delicious. Granted, the meal featured gourmet food that one does not ordinarily associate with a ballpark, such as prime rib, swordfish, kale salad, plantains, garlic mashed potatoes, etc. The tickets also included free wine or beer (Flying Dog Doggie Style was my ale of choice that evening), plus traditional ballpark snacks and more drinks throughout the game. That's right, open bar and individualized seat service all evening! 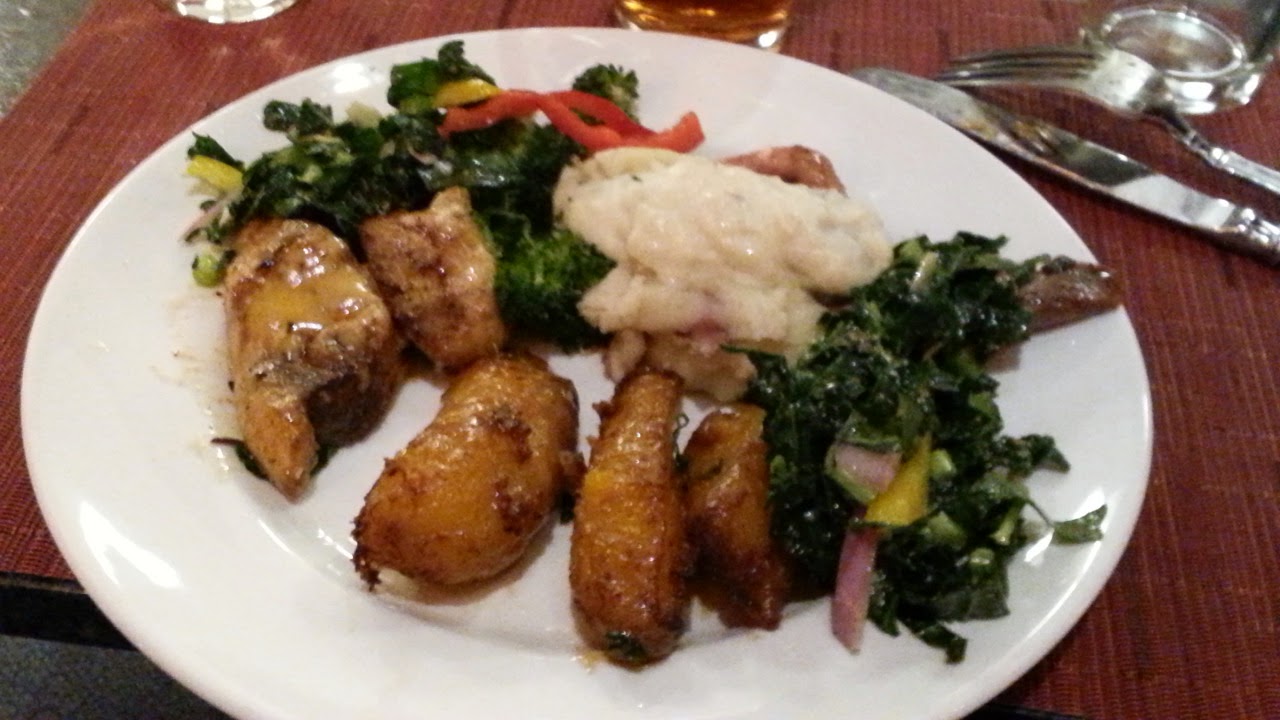 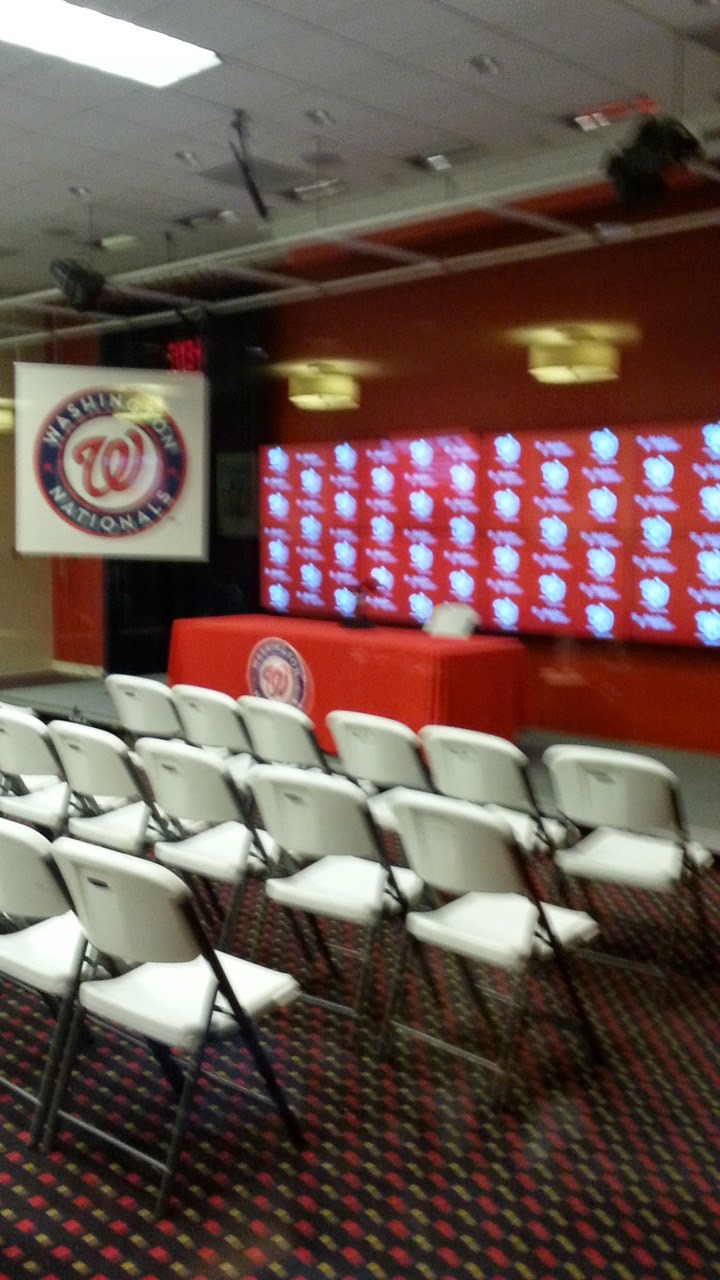 During the meal, seven members of our group sat next to the press conference room, pictured at left. Around the corner, fans in the Club could watch Nationals players hitting in a batting cage.

The Club bar provided temporary warmth on a chilly evening so I went back inside several times to catch bits of the NCAA Final Four games that were contested that night. Oh, and the dessert bar had gelato!

Here are some pics of most of the members of our group at the game, including last year's champion Bill Z. receiving his bobblehead trophy. 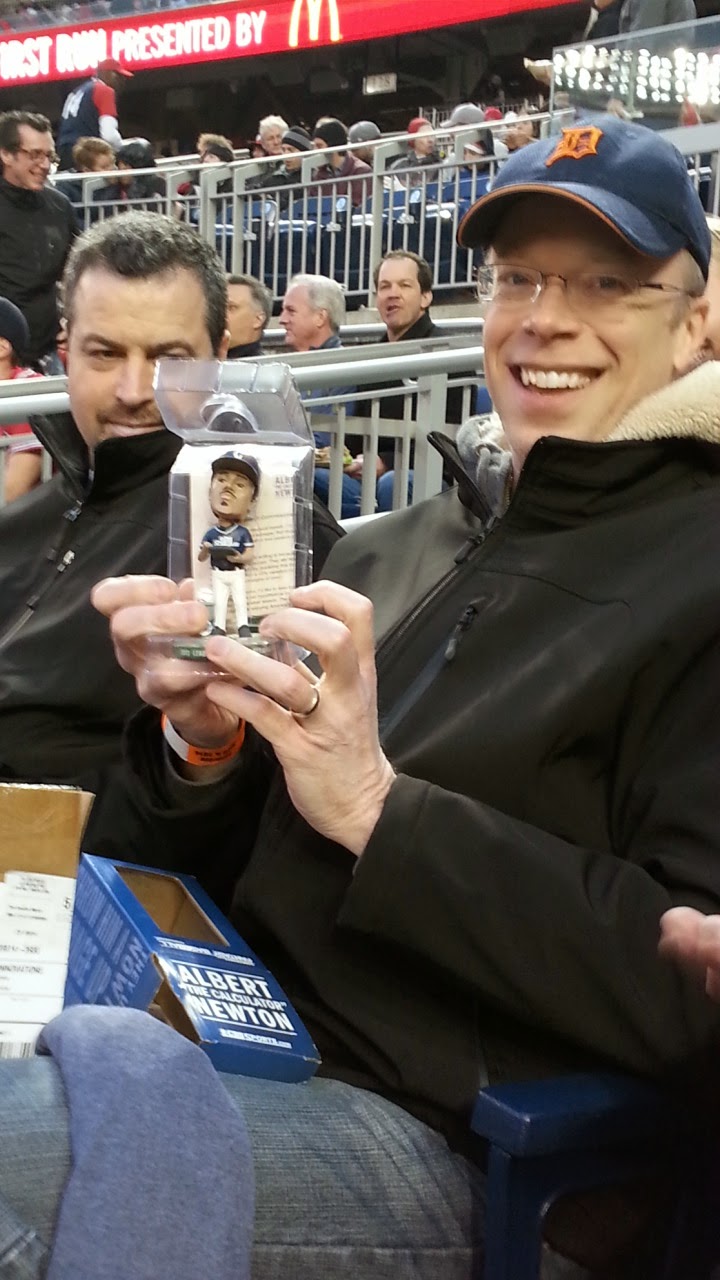 It was a terrific night after a fun day.

As planned, I dropped by the National Debate Tournament in Bloomington, Indiana, on Saturday, March 29, and watched the constructive speeches for a Kansas versus Northwestern match of two 4-0 teams. NU won that round and proved to be the Copeland Award winning team in 2014.

Both Kansas teams advanced to the elimination rounds and were defeated in the round of 32.

Georgetown won the tournament, as the same debaters impressively repeated their 2012 victory.

Between rounds, I met Kevin Kuswa, a Georgetown debater on the NDT champion in 1992. I coached Georgetown in 1984-1985. Kuswa is now coaching at Whitman College.