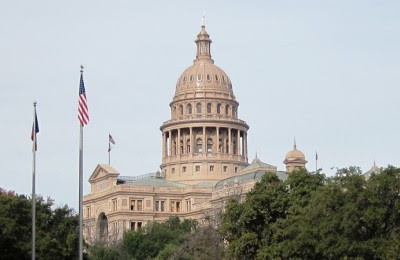 As I mentioned yesterday, I traveled to Austin, TX, for an academic conference last weekend. This was my first trip to the booming city since conducting dissertation work at the LBJ Library in the late 1980s. I spent some time walking around downtown, but the conference is short and intense, so I had very little free time to do much during the 48 hours I was there. Nonetheless, I was able to take in some of what the city has to offer as the alleged "Live Music Capital of the World."

From my experience, it appears that Austin's 6th Street genuinely rivals or even surpasses Beale Street in Memphis or Bourbon Street in New Orleans for nightlife and entertainment. On Saturday night, some friends and I walked around that area of Austin looking for good live music and local beer. It didn't take long to find what we sought.

I think the band that we all enjoyed the most was Light Horse Harry, which we caught at an Irish pub (B.D. Riley's) near the end of our evening. All the musicians are UT-Austin students and they played a nice mix of covers and original songs. Earlier, we also liked Larry g(EE), who played an eclectic set of music with a very large band at Gatsby's.

During that evening, I tried Austin Beerwork's tasty Fire Eagle IPA, Independence Brewing's very good Stash IPA, and Thirsty Planet's potent Buckethead IPA (8.9% ABV). I typically avoid the high alcohol IPA's, but I didn't realize the ABV until I had the beer in hand and looked it up on Untappd. Despite the fact that it was an excellent brew, I left one-third of it behind because it was served in a pint glass and I had to give a presentation as a discussant on Sunday morning.

During the conference, I also had a bottle of Shiner Bock at the reception and drank a delicious pint of Racer 5 IPA at Haymaker. The latter California beer is difficult if not impossible to find in Louisville, so that is my main justification for not trying another local beer. Incidentally, Haymaker came recommended to me and its beer list was certainly quite impressive. Unfortunately, the Fire Eagle IPA served to me there lacked carbonation and seemed flat. That's another reason why I followed up with the Racer 5.

The event opens with a keynote speaker and a reception. These sessions occurred on Friday night, but during some past meetings they have occurred on Thursday with the conference ending Saturday at noon. The opening evening is followed by a full day of panels, concluding with another guest speaker and a dinner in the evening. Indeed, all the meals during this long day are provided as part of the registration fee. The final day ends at noon, but breakfast is also provided. This year, the panels were on Saturday-Sunday.

Because the conference is brief and relatively small, attendees seem to feel obliged to remain at the event and attend panels or network with other participants. Dining together probably also contributes to the social environment. The meetings definitely provide a nice opportunity to catch up with colleagues who share an interest in security politics and meet graduate students and junior faculty from around the country. Next year's conference is in Springfield, MA, and will be hosted by Jon Western of Mount Holyoke and Duck of Minerva.

On Saturday afternoon, I participated in a panel on “Images of Terrorism and Counter Terrorism” and delivered my paper, "The Dark Knight and the National Security State." This is a significantly revised version of a paper I delivered in August at a humanities conference in Scotland. Yes, I delivered yet another academic paper on Batman and the war on terrorism.

This latest version of the paper considers the conversation around a popular film like The Dark Knight as a potential public sphere, conceivably igniting important discussions about otherwise unchallenged national security issues and assumptions. I have long been interested in public deliberation and thus some of the paper might seem familiar based on my past blogging. I discuss the well-known problems about public debate on security issues, particularly during conditions of crisis (high threat and "state of emergency"): secrecy, executive branch dominance, lack of participation, etc. Even the mass media is stymied by these factors, which means that the coverage in the media is framed around war and security (the Copenhagen's "securitization" literature is relevant here). The media also "indexes" their reports to executive branch sources.

Comments on this paper would be welcome.