Sadly, Professor Frank B. Cross of the University of Texas Law and Business Schools has died. Frank was a national debate champion at the University of Kansas (1976), Harvard Law School graduate, former practicing attorney, and long-time professor and scholar in Austin. I will link (here) to his obituary when it is published online. My friend, former KU debater Steve Griffin has posted a short blog entry about Frank's academic contributions -- and briefly notes his long battle with a terrible disease.

Honestly, I didn’t really know Frank all that well, but he was incredibly influential in my life and I am very grateful for the inspiration he provided. Obviously, I should have shared this appreciation with him long before he died.

Frank's influence on my life began when I was a senior in high school. I had debated one semester at El Dorado (KS) High School during my sophomore year -- Kansas high schools only had debate for one semester in those days. Then, I debated my junior year at Charles Page High School in Sand Springs (OK). My father's job had taken us to the Tulsa area and debate allowed me quickly to find a new group of good friends in high school. As it turns out, both El Dorado and Sand Springs were pretty good high school debate programs with young energetic coaches.

Some of my friends at Sand Springs were especially serious about debate. My colleague, for example, was attending the Northwestern University debate institute after our junior year. I wanted to be successful and I'm a competitive guy, so I ended up attending KU debate camp. I had long been a Kansas basketball and football fan and the trip also served as an on-site visit to my preferred college. It made for a reasonable sell to my parents.This would have been summer 1978.

Camp was fun and I really liked the KU campus. I learned a lot, started thinking about debating in college, and met Steve Griffin, who provided some encouragement to me. Most KU debaters, he noted, were former Kansas high school products. Steve had gone to Lawrence High School and would make the semi-finals of the NDT in 1979. That's the Final Four in basketball vernacular.

After the camp, I put my hands on a copy of the Journal of the American Forensics Association article featuring the final national championship debate between the University of Kansas and Georgetown University. That winning Kansas team was comprised of Robert (Robin) Rowland and Frank Cross. They were juniors at the time and followed up their championship with a very successful senior year that ended with a loss in the semi-finals of the National Debate Tournament. Frank and Robin are now members of the University of Kansas debate Hall of Fame.

For weeks (and months) afterwards, I sometimes practiced reading aloud Frank's second negative constructive speech to figure out if I had the verbal "speed" to debate in college at a nationally-competitive program like Kansas. I also mined Frank's references from the "Malthus was right" argument he made in that debate. His bibliography allowed me to assemble (and understand the complexity of) the argument he was making (against a food aid case) – even though I figured it would not be something I could use in Oklahoma high school debate at the time.

Next, Frank's success as a KU debater shaped who I became as a college debater. As a freshman in Lawrence I took a required debate theory and argumentation class from Robin Rowland, who openly admitted that much of what he knew about developing disadvantages to affirmative plans was learned from years and years and years of debating with Frank Cross. Rowland and Cross were both products of Lawrence High School and had debated together through four years of college. They were friends for decades. Essentially, I learned a tremendous amount of debate skill from Robin, but he had learned a good deal about making attacks on affirmative plans from Frank. Robin also repeatedly emphasized the importance of research and often credited Frank on that front as well.

My ultimate identity as a college debater was largely based on my researching disadvantages to various affirmative plans.

From around age 5, I had wanted to be a lawyer. When I discovered that Frank had gone to Harvard Law School after attending KU, I figured that was a viable pathway for me – maybe not Harvard Law specifically, but some excellent (if not elite) law school. It would be wrong to say that it made Kansas a viable choice, because I long intended to attend KU. But it made the pathway thinkable -- Kansas, college debate, good law school, etc.

During my years as a college debater (and then two years as a coach), Frank’s decision to leave private legal practice (and Steve Griffin's parallel decision, I would note) for a career in academia, made me rethink why I thought I wanted to be a lawyer.  Why were these bright guys abandoning the career I thought I wanted -- in favor of academia? In the end, that pathway made sense for me too.

Finally, while I was working on my dissertation in late June 1989, Frank generously allowed me to stay with him in his home while I conducted archival research at the LBJ presidential library in Austin. I remember some wide-ranging conversations with him about politics, academia, law, etc. Most clearly, however, I recall our discussions of how best to assemble a team in fantasy baseball. We were watching the NBA draft on TV and I had discovered his library of  Bill James abstracts in his guest room. Frank could be a very serious scholar and thinker, but he also enjoyed having a drink with friends, talking about sports, and speculating about politics.

In the end, I very much appreciate all of those things too.


I've been waiting to receive authorization to share some news. This morning, my twitter feed finally provided the signal:

Pleased to be welcoming @RodgerPayne next month to @dundeeuni to collaborate on Trump, international law, and human rights https://t.co/t93hZQUjDO
— Kurt Mills (@ProfKurtMills) April 24, 2019


After those tweets appeared, I posted one that I had been holding in reserve:

News: Very pleased to have been named a 2019 Visiting Global Scholar by @ISSRDundee and will be collaborating on-site in late spring with @ProfKurtMills on a project: "America First and the Human Rights Regime." https://t.co/GPbGzDOeF8 https://t.co/KJBW810Ogn
— Rodger Payne (@RodgerPayne) April 24, 2019

I'm giving a couple of talks next week at Wofford College. One of them will be about my 2017 article "Laughing off a Zombie Apocalypse: The Value of Comedic and Satirical Narratives." Preparing for the talk, I became curious as to the continued popularity of zombies. Scholars who study popular culture have to be on the alert for changes that might leave them studying an unpopular phenomenon.

I know "The Walking Dead" (which started in 2010) is still on television, though I have not watched it in several years. Likewise, AMC has a spinoff series called "Fear the Walking Dead" and other zombie-themed shows are still on TV: "iZombie" (I have viewed season 1 and part of 2) and "Santa Clarita Diet." Today, I discovered that the long-promised sequel to "Zombieland" is set for release this October.

This would seem to indicate that the undead are not yet dead in popular culture.

For less anecdotal evidence, I turned to Google Trends. In case you are not familar with that phrase, it is a Google application that measures "Interest over time" in particular search terms. Consider this chart of searches for "zombie" since April 4, 2007 (12 years ago today):

Google says that "Numbers represent search interest relative to the highest point on the chart for the given region and time. A value of 100 is the peak popularity for the term. A value of 50 means that the term is half as popular. A score of 0 means there was not enough data for this term."

This means that the peak time for popular interest in zombies was June 2012. There's been a steady decline, which seems worrisome.

For relative interest, I added the search term "Barack Obama"and the results were somewhat startling. 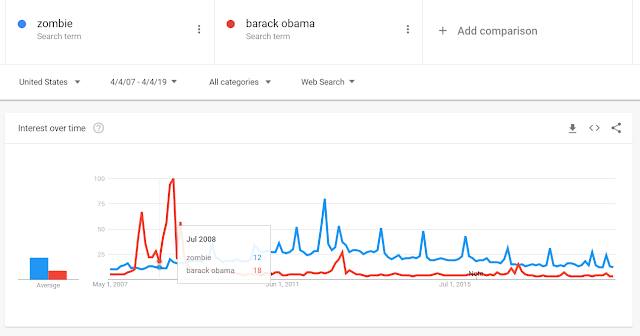 So, basically, people have for many years searched more frequently for information about zombies than they have for the President of the US through eight of those twelve years. Obama's rise to fame early in this period is the only real exception. Did people in the US take him for granted?

I added the search terms "Tom Brady" and "Beyoncé" to get a feel for relative differences with a prominent athlete and pop singer. The results are perhaps not surprising, at least to me: 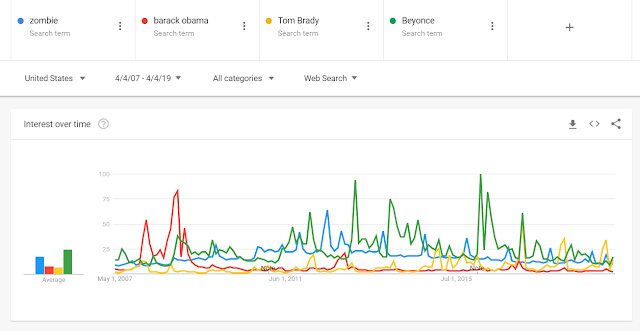 Beyoncé is generally the most popular through this time, but Tom Brady and zombie occasionally emerge. Again, Obama was very popular when he burst on the presidential politics scene.

Then, I wondered how would this chart look if I added "Donald Trump"? 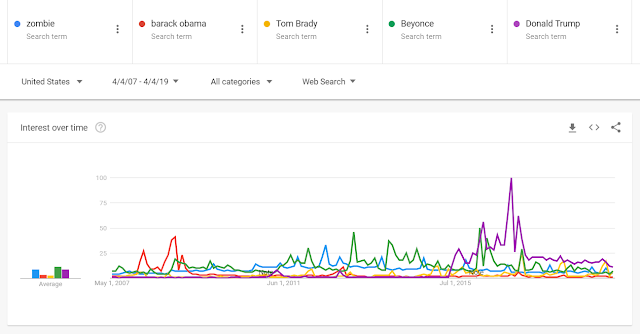 Trump's peak when he emerged as a presidential candidate set incredible new heights of popular attention. And since that date, Trump has maintained his lead over the other terms by a decent margin.

I played around with assorted celebrities, products, and ideas and discovered that Trump's peak isn't necessarily so impressive when considered against various non-political terms. For example, consider amazon, sex, and iPhone:

Through much of the period, zombie and Trump are neck-and-neck. Neither of those search terms are ever as popular as amazon, sex, or iPhone through this twelve year period.  It's not close.

Not all of that is good news.