Commemorating the March on Washington

Today is the 50th anniversary of the March on Washington for Jobs and Freedom. The University of Louisville commemorated the event this afternoon with a program of speakers from the campus and community.

I snapped this picture of my Political Science colleague, Professor Dewey Clayton, who was introducing Louisville Mayor Greg Fischer: 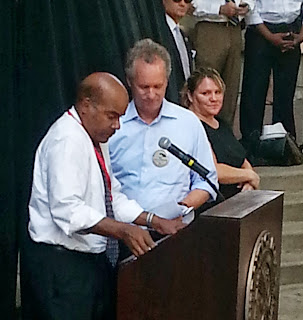 Dr. Clayton was credited as the chief organizer of the event.

Additionally, I took a picture of several other colleagues who attended the symbolic march and event. From left-to-right, Professors David Buckley, Tim Weaver, Susan Matarese (looking down), and Laura Moyer (who noticed me snapping the shot): 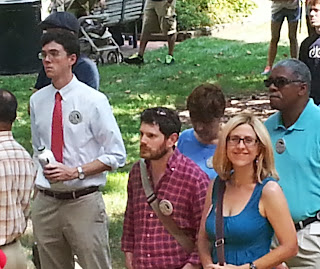 Several other colleagues attended at least part of the event, but they are not pictured here. Nonetheless, it was an important event and I was pleased about the Political Science turnout.

Transparency in the Future

I found this unsettling paragraph in a stack of dusty material meant for this blog. It's from a May 2011 Jackson Lears review of three Sam Harris books, including his well-known (and best-selling, which is redundant, I suppose) The End of Faith: Religion, Terror & the Future of Reason (2004).


Convinced that brain science has located the biological sources of “bias”—the areas of the brain that cause us to deviate from the norms of factual and moral reasoning—[Sam] Harris predicts that this research will lead to the creation of foolproof lie detectors. He does not say how these devices will be deployed. Will they be worn on the body, implanted in the brain, concealed in public locations? What he does say is that they will be a great leap forward to a world without deception—which, we must understand, is one of the chief sources of evil. “Whether or not we ever crack the neural code, enabling us to download a person’s private thoughts, memories, and perceptions without distortion,” he declares, the detectors will “surely be able to determine, to a moral certainty, whether a person is representing his thoughts, memories, and perceptions honestly in conversation.” (As always, the question arises, who are “we”?) Technology will create a brave new world of perfect transparency, and legal scholars who might worry about the Fifth Amendment implications are being old-fashioned.

Sounds like something that could appear in a Philip K. Dick story.


Note: This is NOT in reference to the famous Sam Harris who was my high school classmate.

This is my annual post about the Louisville Sluggers of the Original Bitnet Fantasy Baseball League. We draft twice each season -- once prior to the regular season and again at the beginning of July. I didn't get around to putting this post together until now. Sorry, though I doubt anyone cares.

Why do we draft twice each year? Well, the OBFLB crowns champions for both the "A" first half and "B" second half of the baseball season, divided by the All Star game. My team's most recent championship was in 2008B. I'm going to report draft results for second half season -- my A season did not go all that well though the team's hitting was very good. My aging pitchers failed or got injured as a group, especially Tim Lincecum (SF), Josh Beckett (LAD), and Joel Hanrahan (BOS). All are gone now, as is Jeremy Guthrie (KC).

Here are the 2013B Sluggers (players in red were retained from 2013A). Since I kept 10 players, mostly infielders, I started the draft in round 11. Also, I intentionally drafted a few injured players so that I could put them on the DL and acquire extra players. Since backup catchers aren't very important in this league (injury insurance only to prevent penalty) and relief pitchers are so numerous, I delayed filling many of those roster spaces until the free agent period. We use 28 man rosters, exclusive of injured players.

In retrospect, I probably should not have retained Olt. His former teammate Profar qualifies at 2b and SS and will soon qualify at 3B. He may also qualify at OF eventually. For the B season, our league requires that a player appear 6 times at a position during the current year -- or once during the week when he is list at a position.

Buxton of the Twins has replaced Profar as the top prospect in baseball and many analysts rank Bradley as the top-ranked pitching prospect. Syndergaard is also highly regarded and pitching in AA.

Other notes: Pitcher M.A.G. was a Cuban free agent without a team at the time of the draft, but he signed with Philly soon after the season began. Pitcher Torres had joined the Mets rotation when I drafted him, but may now be in line for some saves (which I desperately need). Utility player Chris Parmelee (MIN) (17th round) was sent down during the draft and I cut him right afterward so as to have a healthy and active substitute player. SP Kevin Slowey (MIA) (19th round) lost his spot in the Marlins rotation and then got hurt. Thus, he too was cut and replaced.