This is my (very late) annual post about the Louisville Sluggers of the Original Bitnet Fantasy Baseball League. We draft twice each season -- once prior to the regular season and again at the beginning of July. I didn't get around to putting this post together until now. Sorry, though I doubt anyone cares. I'll just report draft results and transactions for the second half season -- my A season did not go all that well.

Why do we draft twice each year? Well, the OBFLB crowns champions for both the "A" first half and "B" second half of the baseball season, divided by the All Star game. My team's most recent championship was in 2008B. The current team is all-but-assured a place in the 4 team playoff competition that begins Monday. I'll update this post as appropriate to provide results.

Here are the 2014 B Sluggers (players in red were retained from 2014A). Since I kept 12 players, I started the draft in round 13. We use 28 man rosters, exclusive of injured players. Because Arenado and Profar were on the major league and OBFLB DL mid-season, I had 2 extra picks at the end of the draft.

I have felt strong pressure to trade current (or recent) top prospects, Russell, Profar, and/or Buxton all season because a team with Votto and Tulowitzki needs to win NOW and not build for the future. However, I resisted because I believe all three are going to be very valuable talents. Plus, my all-stars got hurt and I assumed the B season would be another bust.

In any case, Russell and Profar are very young middle infielders who can seemingly hit like outfielders and Buxton is an excellent young hitter, with tremendous speed and looming power. I did trade away top power pitching prospect Archie Bradley at mid-season in a deal that returned Bailey. I received Nolan Arenado of the Rockies in a separate deal. Also, I traded long-time DH Billy Butler for closer Rodriguez.

At season's end, the draft and trades clearly went very well. As of today, September 13, Carter has hit 17 HRs since the all-star break, which leads the majors. Newly acquired Arenado has been a top 10 player and has 12 homers. Arcia and Dickerson have 11 homers each. These are top 20 figures in all of baseball. Each of the power hitters except Arcia is in the top 15 in slugging percentage, though that is not a category this league uses. Plus, Arcia has slugged over .500 himself.

Inciarte and Ramirez have 8 steals each, which puts them in the top 30 in baseball post-break. Gose has 10 steals, though he rarely plays on my team. Kipnis has 9 thefts. The team has plenty of speed and power, really.

In a league that still uses batting average, Loney has hit .320, which is a top 15 figure for the second half. Only about 25 players have hit .300 or better. Arenado, Carter, Dickerson and Inciarte have all hit between .283 and .296, placing them among the top 55 hitters for average.

Among starters with at least 35 innings pitched, Cobb has the lowest ERA in baseball in the second half. Shoemaker is in the top 10. Hughes has also been terrific. Indeed, all three of those starters are among the top 20 second half pitchers in WHIP. Bailey (1.61 ERA) and Skaggs (3.18) pitched very effectively, but in only 7 total starts before being derailed by injury. Potentially, the pitching could have been even better as Archer and Hellickson have had ERAs between 3.75 and 4.00.

Thanks to trades and injuries, the Sluggers now have 3 closers in the bullpen.

Is this a championship team? Maybe. Surprisingly. 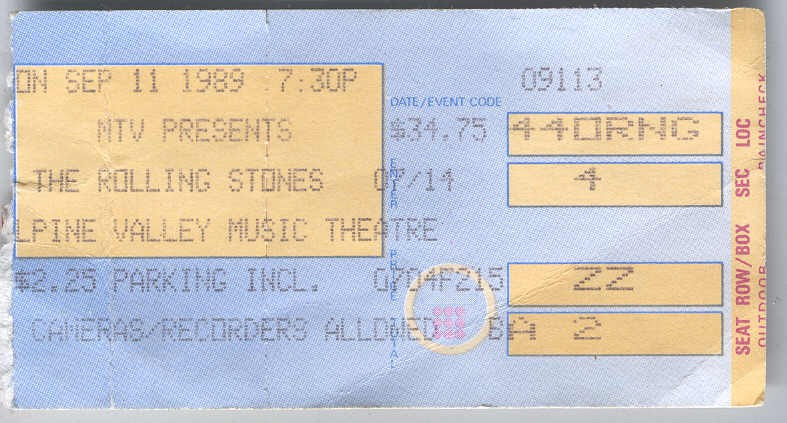 Twenty-five years ago today, my spouse and I saw the Rolling Stones live -- with Living Colour as the warmup group. I've found several different websites that claim to have the setlist. This is from setlist.fm (it is supposed to automatically update when edited): 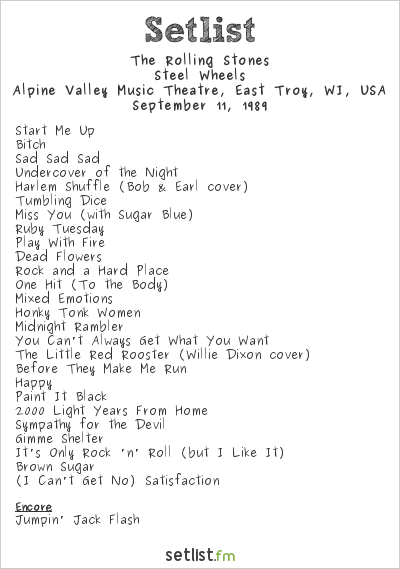 This one, slightly different, is from someone who has a recording:

And setlist.com has one too.

At the time, I thought the Stones were rapidly becoming old men. Mick Jagger was 46 and Keith Richards would turn 46 later that year. Now, I'm one full sabbatical cycle older than that. Gulp.

Of course, Jagger and Richards are now 71 and 70 and still going strong. Below, you can watch their performance of "Miss You" from a concert they performed in Hyde Park during mid-summer 2013. That song was the first cut on an album released in 1978 when I was in high school. Indeed, based on the tape's presence in my car's 8-track player, you could say it was the soundtrack to my high school experience. A few months ago, I watched the Hyde Park concert film on television: