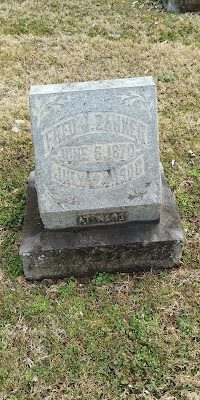 A few weeks ago, my colleague Jasmine Farrier tweeted a reminder about an event I attended prior to the pandemic. It was a book launch for a work about the life of Paul Weber, who died far too young back in October 2005. Paul was department chair when I was hired at Louisville decades ago:

This was such a special night for an amazing man and friend. Thanks to all who made it happen and all who came to celebrate Paul Weber. https://t.co/yLPhb1Wfrq

As it happens, I often walk past Paul's grave when I navigate through Calvary cemetery.  As I have frequently mentioned, I have been walking in several nearby cemeteries during the pandemic. They're usually quiet and I've learned a bit about local history.

Here's a photo of his grave: 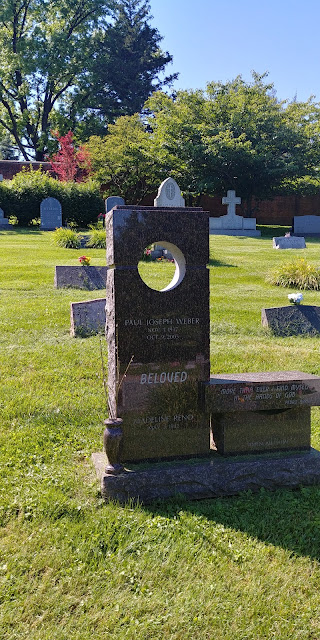 As I've been doing in recent years, I'm posting Metacritic's final compiled list of best films based on the top choices of nearly 300 film critics. This is an aggregation of their end-of-the-year top 10 lists. Last year's list was drawn from 340 individual rankings.
After the list, I'll place the films I've seen in tiers and briefly discuss any notable changes from my Films of 2020 list posted at the end of that year. Finally, I'll list the films that I still need to see.
This year, because so many of these films were streaming, I saw a large percentage of them at home in the year they were released. I have personally seen 15 of the 30 listed films, which is about my normal rate when I post these lists in late February each year.

Note that last-minute release date changes (necessitated by the ongoing pandemic) mean that several titles included on multiple lists (most notably, Nomadland) will technically be 2021 releases rather than 2020 films. Also note that since we include some foreign publications, it is possible for a few titles to repeat from last year's list due to differences in USA and overseas release dates.

Tier I (Outstanding: top award choices)
Nomadland
Never Rarely Sometimes Always
Minari
First Cow
This category is always the smallest, but it is smaller than usual this year. Most likely, this is because studios elected not to release some of their best films during the pandemic -- and productions might have been delayed.
However, it probably also has to do with the timing of the Academy Award cycle this year -- films released through February will be eligible for awards. Look for some late-arriving excellent films -- like Nomadland and Minari from this list, which are slated to be released more widely in February.  Also: the highly anticipated Judas and the Black Messiah and The Father are coming soon and the excellent One Night in Miami was released in January, too late for this list.
2/19/21: I saw Nomadland on Hulu. It is excellent and Frances McDormand gives a great performance. Third Oscar?
Tier 2 (Very good: strong consideration for awards)
Promising Young Woman
Sound of Metal
The Assistant
The Trial of the Chicago 7
Ma Rainey's Black Bottom
This category will also fill out a bit after I've seen more of the films.
The new entry here for me is the Netflix picture about the criminal legal proceedings the Nixon Justice Department pursued against 8 men who helped organize protests at the 1968 Democratic National Convention in Chicago. The protests were marred by violent riots often blamed on Chicago's police department.
The defendants included Tom Hayden (played by Oscar-winner Eddie Redmayne), Abby Hoffman (Sacha Baron Cohen), Jerry Rubin (Jeremy Strong), and Bobby Seale (Yahya Abdul-Mateen II). The story refers to the "Chicago 7" because [historical spoiler alert] the judge was ultimately forced to order a mistrial for Seale as his lack of legal representation (his attorney had surgery just as the trial was beginning) led to courtroom outbursts by Seale and judicial system over-reaction to those outbursts.
Oscar-winning actor Mark Rylance played defense attorney Willian Kunstler and Oscar-winner Aaron Sorkin wrote the script and also directed the film. It will likely receive Academy Award and other top film nominations for prizes in various categories. I rated the film more highly than most critics, probably because I'm especially interested in effective political drama. This is in my wheelhouse.
Tier 3 (Above average, but flawed in some way)
Palm Springs
Mank
I'm Thinking of Ending Things
Tenet
Lover's Rock
Collective
Vast of Night
Time
Dick Johnson is Dead
The Invisible Man
Da Five Bloods
Soul
As I always say, this is not a ranking and on a different day I might alter the order of the films. I did like Palm Springs a lot more than Da Five Bloods and The Invisible Man, but the 5 films after Mank in the center of the list are difficult to compare.
The new dramatic entry here from the first weeks of viewing in 2021 is Mank, which is a well-acted and fairly entertaining tale about the Oscar-winning and self-destructive writer of the classic film Citizen Kane. I felt that some small edits in the script and/or some modest changes in story-telling (including direction) might have made it more powerful. My spouse didn't find it especially compelling.
We also saw Time and thought it was a very well-done documentary about the criminal justice system. I personally would put Crip Camp above either of the docs listed here. Indeed, I  saw a number of new narrative films in 2020 that I placed above many on this list, including the excellent Saint Frances.
Tier 4 (Skip it)
[So far this category is empty.]
Films I still need to see
David Byrne's American Utopia
Bacurau
Bloody Nose, Empty Pockets
Martin Eden
City Hall
Possessor Uncut
Vitalina Varela
Wolfwalkers
Mangrove
Once I view these films, I'll move them up to the appropriate Tiers above and note that updated entry with yellow highlighting.