As I noted today on Duck of Minerva, Kevin Bales has won the 2011 Grawemeyer Award for Ideas Improving World Order. His work focuses on ending slavery in the contemporary world -- a problem that IR scholars have discussed as an exemplar of normative success -- largely because of an extensive prohibition regime.

Here's a video of Bales discussing his ideas at TED 2010:

Visit this blog's homepage.
Posted by Rodger A. Payne at Tuesday, November 30, 2010 No comments:

I have not read the Harry Potter books, but saw "Deathly Hallows" the Wednesday before Thanksgiving. The kid with the mark of Zorro continues to be under threat from the villain who strongly resembles Nosferatu. Oh, and the Smoke Monster from "Lost" seems to appear at regular intervals to menace HP and his allies. Often, HP, Mr. Scott, and the female Spock escape these attacks by teleporting away at the last moment. I'm not sure why they don't simply use their cloaking device.

Spoiler alert: Luckily, HP and his pals find Excalibur and are thus prepared to defeat the bad guys (perhaps in the forthcoming sequel, "HP 7B"). Unluckily, the Dark Lord has obtained a very big wand from the White Witch and now thinks he's destined to beat HP.

Thanks to a helpful explanation of a key symbol provided by a minor character (Robert Langdon? Lovegood? Something like that...), the non-reading audience now knows that this sequel will likely concern the search for a small rock apparently belonging to Christ.

The final film will open after the current one closes.


Visit this blog's homepage.
Posted by Rodger A. Payne at Friday, November 26, 2010 No comments:

Email ThisBlogThis!Share to TwitterShare to FacebookShare to Pinterest
Labels: film

Dan Froomkin has posted "The Two Most Essential, Abhorrent, Intolerable Lies Of George W. Bush's Memoir." Read it. I was going to quote some of the best parts, but there are simply too many to excerpt.

Froomkin has written a lengthy and link-laden piece demonstrating that George W. Bush was NOT reluctant about attacking Iraq. The former Yale cheerleader was also cheerleader-in-chief for war. Moreover, despite Bush's claims, torture was NOT a legitimate weapon in the war on terror.


Visit this blog's homepage.
Posted by Rodger A. Payne at Tuesday, November 23, 2010 No comments:

I am the father of two teenagers, which means I have a fair amount of experience observing them "multitask." Typically, this means they are doing homework, eyeing their cellphones for text messages, answering incoming messages -- and perhaps listening to music too.

This doesn't seem especially productive to me -- and there's now a good deal of academic research that backs up my impression.

Former Yale English Professor and current literary critic William Deresiewicz condemned "multitasking" last year when speaking to cadets at West Point (published in the spring 2010 The American Scholar and reprinted recently in Utne Reader). He's read some of the literature:

[A Stanford study team of researchers] separated the subject group into high multitaskers and low multitaskers and used a different set of tests to measure the kinds of cognitive abilities involved in multitasking. They found that in every case the high multitaskers scored worse. They were worse at distinguishing between relevant and irrelevant information and ignoring the latter. In other words, they were more distractible. They were worse at what you might call “mental filing”: keeping information in the right conceptual boxes and being able to retrieve it quickly. In other words, their minds were more disorganized. And they were even worse at the very thing that defines multitasking itself: switching between tasks.

Multitasking, in short, is not only not thinking, it impairs your ability to think. Thinking means concentrating on one thing long enough to develop an idea about it. Not learning other people’s ideas, or memorizing a body of information, however much those may sometimes be useful. Developing your own ideas. In short, thinking for yourself. You simply cannot do that in bursts of 20 seconds at a time, constantly interrupted by Facebook messages or Twitter tweets, or fiddling with your iPod, or watching something on YouTube.

Around the same time I read that essay, I listened to part of a multitasking story on NPR featuring David Meyer of the University of Michigan. NPR reports that Meyer "has spent the past few decades studying multitasking." He is not keen on it:

"For tasks that are at all complicated, no matter how good you have become at multitasking, you're still going to suffer hits against your performance. You will be worse compared to if you were actually concentrating from start to finish on the task," Meyer says.

Multitasking causes a kind of brownout in the brain. Meyer says all the lights go dim because there just isn't enough power to go around.

While searching for the link to that NPR story, I came across another one featuring Earl Miller a Picower professor of neuroscience at MIT.

"People can't multitask very well, and when people say they can, they're deluding themselves," said neuroscientist Earl Miller. And, he said, "The brain is very good at deluding itself."

...What we can do, he said, is shift our focus from one thing to the next with astonishing speed.

"You're not paying attention to one or two things simultaneously, but switching between them very rapidly."

Multitasking increases stress and frustration as well, with potentially adverse consequences for health.


Visit this blog's homepage.
Posted by Rodger A. Payne at Thursday, November 18, 2010 No comments:

Over at Duck of Minerva, I've been blogging about revelations from the George W. Bush memoirs.

On Friday, November 12, I posted "Drip, drip, drip," which focused on Bush's acknowledgement of the Israeli destruction of a Syrian nuclear reactor in September 2007. Did the Bush doctrine have limits?

Saturday, November 13, I blogged "Bush: McConnell plays politics with national security." Bush says the Kentucky Senator wanted to withdraw troops from Iraq so the GOP would not lose Congress in 2006 -- even when he was publicly condemning Democrats for proposing the same reductions.

Updated: Monday, November 15: "(Head of) State Secrets." It is about Bush's accusation that German Chancellor Schroeder flip-flopped on the Iraq war -- and the former German leader's reaction. Put simply, someone is lying.

Visit this blog's homepage.
Posted by Rodger A. Payne at Sunday, November 14, 2010 No comments:

In the last 10 months, I watched the entire series run of "Lost," primarily on DVDs checked out from my university library. I caught a few episodes on Hulu.

At the beginning of the year, Entertainment Weekly named "Lost" the second best show of the past decade. Since they named "The Sopranos" number one and "The Daily Show" third, I wondered if EW knew something about television that I didn't. Both of those shows were terrific this past decade.

When I watched the first few episodes, the IR theorist in me was intrigued by the idea of people living "in a state of nature" (literally) and under apparent threat from unknown outsiders ("others" or "hostiles") -- not to mention polar bears. One of the central characters was named John Locke. Soon, other characters named Hume and Rousseau were introduced. Then more characters named after philosophers were placed into the show. Hmmmm.

Anyway, I've viewed the entire series now and cannot say that I would have been better off watching contemporary films. The storyline was usually interesting and most of the acting was good. Watching "Lost' wasn't that time-consuming. I ended up seeing 10 to 12 episodes per month -- often watching 2 or 3 in an evening. Since they ran 42 minutes each (no commercials on DVD), viewing 3 in a row was like watching a single 2 hour movie.


Visit this blog's homepage.
Posted by Rodger A. Payne at Thursday, November 11, 2010 No comments:

This morning's paper reported that both Billy Martin and George Steinbrenner are on the veterans committee ballot for the baseball Hall of Fame.

Naturally, this fact made me recall the following scene:

I still recall exactly where I was when that happened. It was a wonderful moment -- sweet revenge for this outcome.


Visit this blog's homepage.
Posted by Rodger A. Payne at Tuesday, November 09, 2010 No comments:

I very rarely watch Keith Olbermann's television program any more, though I certainly understand how it serves a purpose in America's political discourse. Arguably, it served a much bigger purpose when it was launched during the Bush era. Few people in the media gave much real scrutiny to the Iraq war and Olbermann was willing to poke at some of the weaker claims.

Olbermann has now been suspended from his job for donating to several Democratic political candidates in 2010.

As it happens, I had a debate case many years ago about the harm of employer's requiring employees to forego constitutional rights. Given how the U.S. Supreme Court has equated political contributions with political speech, this is a troubling case. Moreover, it is difficult to see how an opinionated journalist like Olbermann is allowed to say almost anything (loudly) on-air without violating his network's ethics standards, but cannot make private political contributions.

Olbermann works for MSNBC, which apparently overlooked Republican colleague Joe Scarborough's donations in 2006. Apparently, those were reported in advance, which hardly makes the double standard less of a double standard given that the ethical concern is that media members shouldn't appear to have conflicts of interest when reporting about politicians they support. If transparency is the issue, I'd think public FEC reports would suffice.

Indeed, in 2007, MSNBC identified nearly 150 journalists who gave to political campaigns. A 2010 report by OpenSecrets.org found 235 media donors this year -- giving nearly half a million bucks!


Visit this blog's homepage.
Posted by Rodger A. Payne at Saturday, November 06, 2010 No comments:

Over the next two weeks, the University of Louisville's Floyd Theater is hosting a French Film festival. Admission is free!

It appears that the selected films are first-rate. Kudos to the organizers.

I'm going to try to take in at least some of the festival -- and should have gone to see "Lorna's Silence" at 3 pm today. It's been a quiet afternoon and it would have fit in my schedule. Plus, I do like film noir -- even if this film is neo-noir rather than the classic variety.

Of the films, "Séraphine" has been the most critically acclaimed -- you may have heard about it already

"Summer Hours" sounds a bit like "A Christmas Tale," but stars Juliette Binoche instead of Catherine Deneuve.

You can even find family fare, with "A Town Called Panic."

Did I mention that it is free?


Visit this blog's homepage.
Posted by Rodger A. Payne at Friday, November 05, 2010 No comments: 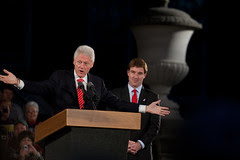 Monday night, I attended a rally at the University of Louisville and saw Bill Clinton speak live. Oddly enough, I've never previously seen a past or present President speak in-person. Clinton is still a very effective politician and communicator.

Many of the politicians who shared the podium that night were elected, including Representative John Yarmuth. However, the intended primary beneficiary, Senate candidate Jack Conway, lost to Rand Paul.


Update: I forgot to mention that a small group of faculty arrived for this 6 pm rally at about 5:45 and had an OK view of the stage. My 17-year old daughter, however, arrived just after 3 pm with a group of friends and claimed front row seats. Thus, she got to shake hands with the guests (including Clinton) and one of her friends received a hug from the Big Dog.

Posted by Rodger A. Payne at Wednesday, November 03, 2010 No comments: