Back on March 12, I had beers with a neighbor in a local watering hole. That week there was all kinds of fast-breaking news that was leading to big changes in our lives-- Tom Hanks and Rita Wilson had tested positive for the new corona-virus, a couple of NBA players had tested positive, and the NCAA had announced it was cancelling its post-season basketball tournament.
Those were the last alcoholic drinks I had inside a structure other than my own home. I'd say any drinks, but I've had water in my office on campus.
The bar played a song performed by Wilson Pickett and my friend and I discussed the fact that his funeral had been held in Louisville. Given that we live in an area with many cemeteries, we wondered if he was buried near where we were sitting. He wasn't, as it turned out.
I mentioned that despite their proximity, I had rarely been in any of the nearby cemeteries. I noted my visits to the Colonel Sanders and Muhammad Ali graves in Cave Hill and wondered if any famous people were buried in the other surrounding cemeteries.
My neighbor knew of one buried in St. Michael's -- 1950s film actor Victor Mature. He had visited the grave and described the highly stylized hovering angelic statue on the gravesite.
So during the quarantine, I eventually found the grave while walking.
Mature was in The Robe, which I think I've seen, and in Samson and Deliliah, which I may have seen -- and certainly knew about. His IMDB bio page reveals that he married 5 (!) times, served in the Coast Guard during WW2, loved playing golf (even at the expense of his career), and died of cancer at age 86 in 1999.
There are many humorous quotes associated with him, including one that he allegedly uttered when he was denied entry into a Country Club in California (where he wanted to play golf). The club apparently always turned down applications from actors. He said, " I'm no actor, and I've got 64 pictures to prove it."
Here are front and side views of his grave marker, taken on different days (as apparent from the foliage): 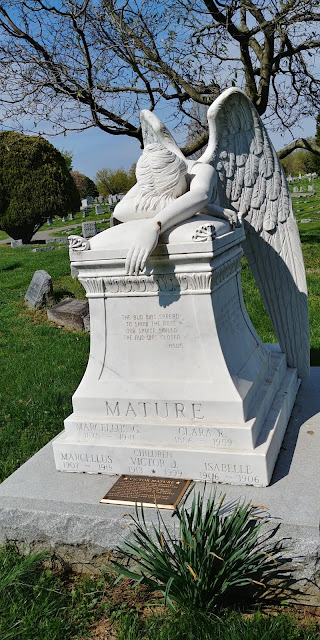 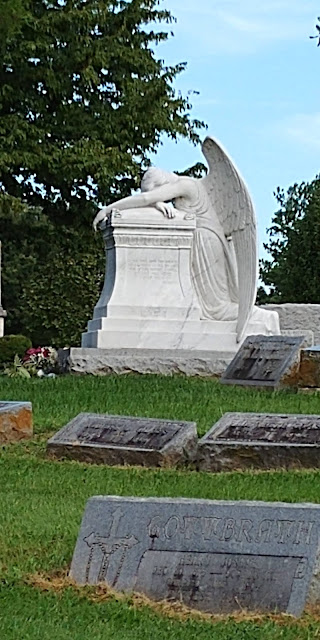 Whistling in the Cemetery

Since the COVID-19 pandemic began, I've taken to walking in my neighborhood cemeteries. I live near at least four major cemeteries -- Saint Louis, Saint Michael, Calvary, and Cave Hill. None of them are particularly crowded with living visitors and they all have nice quiet walking paths.
I've lived in Louisville for decades, but until this year had rarely set foot in any of them. A few years ago, my oldest nephew visited town with his then-spouse and we walked to Colonel Sanders's gravesite in Cave Hill and took a couple of pictures. And last Easter my spouse and I walked to Muhammed Ali's gravesite (while Lonnie Ali was present, actually) in the same cemetery. And I had walked a few times through a portion of Saint Michael's as a shortcut to a local grocery store.
In any case, I'm going to post some stories about Louisville's history related to these cemeteries.
To start, I live closest to Saint Louis cemetery, where John Henry Whallen and his younger brother James Patrick Whallen are buried (in a tomb). Those names might not be familiar to you, but they apparently dominated politics in Louisville for many years more than a century ago. They also made lots of money from whiskey and operation of a downtown burlesque spot -- the Buckingham Theater. The Whallens allegedly made even more money from prostitution and gambling as well and allowed police officers to make extensive use of their facilities.
However, their businesses were apparently threatened by some of Louisville's elite establishment and so John Henry Whallen worked to become a central figure in local Democratic politics and was eventually the powerful  "boss" of the city's political machine -- earning the nickname of "Napoleon." He engineered a mayoral election in the 1880s for a friendly candidate and was named Chief of Police as reward. Whallen's power over the city endured for nearly 30 years, built primarily upon his connections to the police and his ability to control primary elections -- and even general elections.
Whallen, who became one of the wealthiest men in the city, was said to be generous to the poor during hard times. His political base was constituted by immigrants and Catholics. However, as University of Kentucky historian Tracy Campbell has made clear, Whallen was willing to emphasize white supremacy to maintain political power. His machine intimidated black voters and appealed to racist ideas to win white votes. The local Irish-American newspaper, described as "an instrument of the Whallen machine," published the following lines after a Whallen-backed candidate lost a rare election: “Do you want Negro domination or do you want Louisville to remain a city of white people, for the white people, and governed by white people?”
John Henry died in 1913 and though his brother took over the businesses, he was unable to maintain the level of political clout his older brother had. The machine's rule ended.
Much of this sounds like the plot to Boardwalk Empire, but set in Kentucky before World War I instead of in Atlantic City during Prohibition.
Here are a couple of photos of their tomb -- one more distant and the other closer up so you can read the name more clearly: 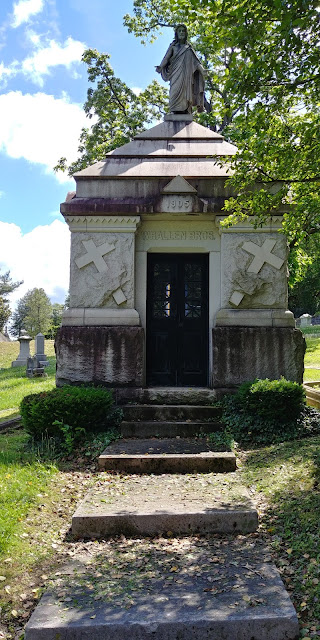 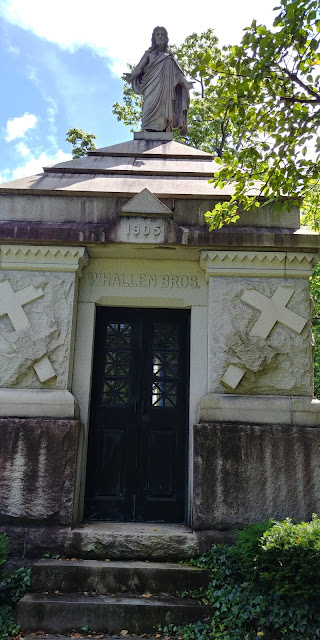