I went to the campus talk by NY Senator Chuck Schumer this morning. I was not sitting very close, so my photos didn't turn out very well. I posted a Twitter thread about the event:


Schumer's talk was not packed with content. He emphasized bipartisanship and was hopeful about upcoming immigration debate in Senate.

Q& A included more content, but nothing especially notable.

Was asked a good question about jobs in an increasingly automated economy. Kept returning to that puzzle, to his credit. Wants to pay more to teachers and aids for elderly.
— Rodger Payne (@RodgerPayne) February 12, 2018


Was critical of selective "deficit hawks" like @RandPaul . Paul voted for the big tax cut, which undermines his credibility on the deficit.
— Rodger Payne (@RodgerPayne) February 12, 2018

The Department Twitter account posted a photo of the Senators with our new department chair Jasmine Farrier:


Did I mention that my term as chair ended and I'm on sabbatical through 2018?

Oh, I snapped this shot from my seat prior to the event (sorry it is blurry, but you were warned above): 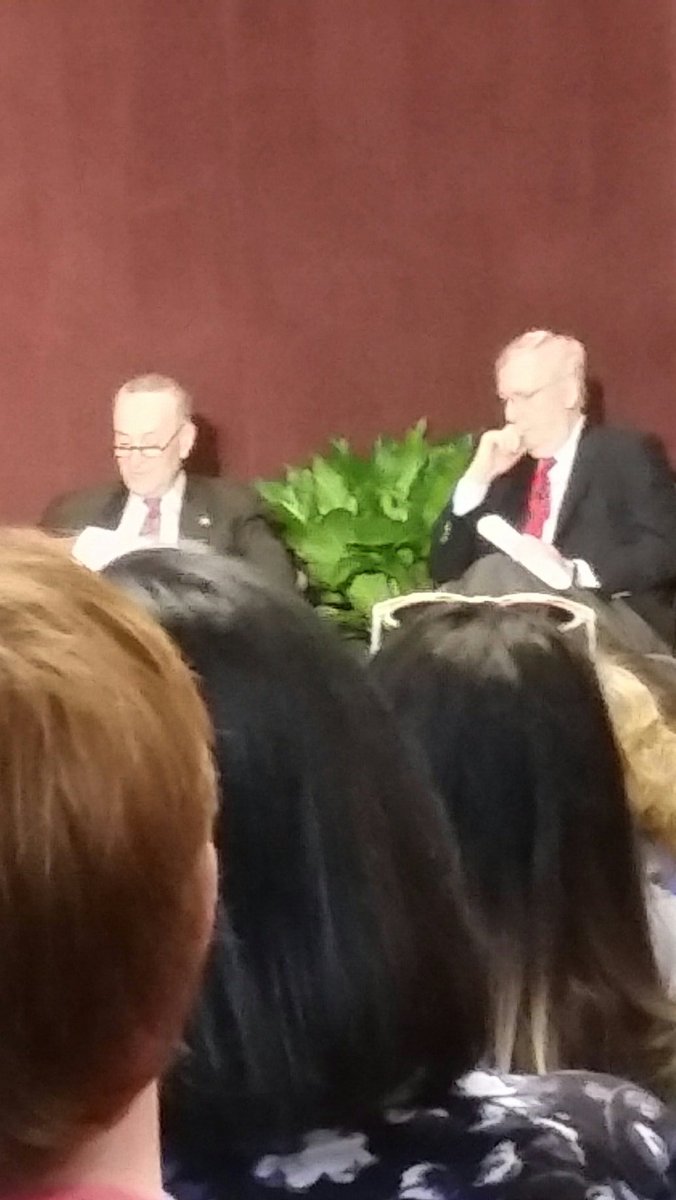 More on Athletic Salaries at Louisville

University of Louisville Interim Athletic Director Vince Tyra cut his own salary this past week -- from $1.2 million a year to "only" $850,000. Sports columnist Tim Sullivan notes that this might make him more likely to land the permanent AD job. Readers may remember I commented about the $1.2 million salary already.

In any case, that first linked story above included Tyra's reasoning for slicing his own salary to $850K:


Tyra said that in examining the athletic department's costs, he looked up the salaries of the other athletic directors in the ACC and averaged the top three, which generated $854,000. As a result, he said he asked to have his salary lowered from $1.2 million to $850,000.

Today, I had a back-and-forth discussion with Sullivan on twitter concerning Tyra's status and pay:

To arrive at a salary, he used top 3 ACC salaries for ADs. Ridiculous. They're surely far more experienced. On academic side, we know the private schools pay more.
— Rodger Payne (@rapayn01) February 10, 2018

When the University was increasing faculty salaries a couple of years ago, no one was paid a new salary obtained by averaging the three highest paid comparable position salaries in the ACC. For one thing, UofL salaries were far under baseline school comparisons and the increase only resulted in salaries that were slightly better than before. Faculty in Arts and Sciences are still paid well below their peers -- especially compared to the highest paid ACC faculty, which tend to be at the private schools. And of course those were the last raises faculty received unless they were promoted in rank -- or managed to get a competing job offer.

Sullivan also pointed out that my thinking didn't account for Tyra's business experience. He asked, via twitter, "If Bill Gates wanted the job, would you pay him as an entry level employee?"

Would any other Power conference school have valued Tyra's experience at that salary? Unlikely. Also, what is market value of the job? Jurich's pay was clearly major outlier.
— Rodger Payne (@rapayn01) February 10, 2018


Sullivan replied to my first question by linking to a 2010 NY Times article noting that a number of schools have hired ADs from business.


As for the market value of the ADs, I found this:

Latest data I could find: "According to USA Today, athletic directors at Division 1 universities whose football teams play in the Football Bowl Subdivision made about $515,000 on average in 2013...a 14 percent increase over 2011."https://t.co/kxeGolJ6ht
— Rodger Payne (@rapayn01) February 10, 2018

So $850,000 per year for a novice AD still seems outrageous to me. I know the data is 4+ years old, but consider this quote from the article: "many of them are paid like CEOs, with many making salaries in the high six figures. A handful even make more than $1 million a year."

Again: Many paid like CEOs. Many in high 6 figures. A handful over a million.

Yet, that has been Vince Tyra's starting salary level.