This past week, during spring break, we had workers in our home stripping wallpaper from the master bedroom, dining room, and stairwell.

Underneath the wallpaper in the lower stairwell, the workers uncovered this message: "Native Dancer 1953." Here's a picture: 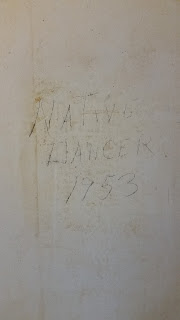 I'm curious about this as Native Dancer was a 1953 contender for the Triple Crown. It won the Belmont and Preakness, but lost the Kentucky Derby by "a head." In 22 career starts, Native Dancer won 21 races. Someone even wrote a book about him.

Why did someone scratch that into the wall of our home? Did they lose a big bet? Win a bet? Did they have a more personal connection? Dunno.

The horse was from Maryland, by the way, where I went to graduate school, was bred and owned by a Vanderbilt, and was nicknamed the "Grey Ghost." Wikipedia has these additional pieces of trivia:


"He appeared on the May 31 cover of Time magazine. Many consider the 'Grey Ghost of Sagamore' to have been the first Thoroughbred television star and TV Guide ranked him as a top icon of the era....In the Associated Press rankings of the greatest racehorses of the 20th century, he was ranked #3, tied with Citation, behind only Man o' War and Secretariat."