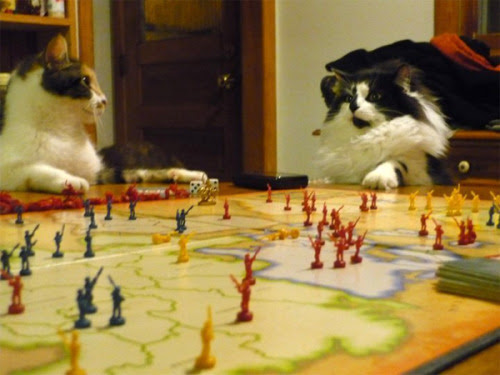 It's been some years since I played Risk. Like dogs, I prefer poker now.

Mitt Romney to a room full of donors:

John Sides at The Monkey Cage doesn't think it will matter.

Bill Clinton and the Facts at the DNC 2012

I did not watch Bill Clinton's speech at the 2012 DNC last night because I'm trying to catch up on a few missed episodes of "Breaking Bad." However, I've now listened to all of the address (and watched some of it) thanks to C-SPAN's complete 49 minute video:

The NY Times has the full transcript.

According to Bloomberg News, Clinton's big early applause line about the huge advantage in jobs created during Democratic versus Republican administrations is true:


since 1961, for 52 years now, the Republicans have held the White House 28 years, the Democrats, 24. In those 52 years, our private economy has produced 66 million private sector jobs.

Actually, Bloomberg didn't really find any significant factual errors in Clinton's speech. That's partly because he didn't do what many other Dems did last night. Consider Elizabeth Warren's address, as the Times reported it:

“He wants to give tax cuts to millionaires and billionaires,” she said. “But for middle-class families who are hanging on by their fingernails? His plans will hammer them with a new tax hike of up to $2,000.”

The Times noted that this charge "is not entirely accurate." That is odd phrasing, but easily explained. The problem is that Warren, like other Democrats, correctly calculated that the Romney tax "reforms" (including significant rate cuts and unidentified reductions in "loopholes") cannot possibly be revenue-neutral, as intended. As Clinton aptly noted on many occasions, the arithmetic just does not work.

Thus, Warren and others assume that the lost revenue would be made up primarily by closing loopholes that benefit the middle-class, such as the mortgage tax deduction or other benefits related to payment of college tuition.

The Times explains the problem with Romney's vague plans for the budget and taxes:

Many tax experts — from the left, the right and the center — do not think there is any way to do all of those things.

When you cut tax rates that much, rich families’ tax liability falls considerably. For the tax plan to raise the same amount of money as it does now, someone would need to pay more.

But it is not clear that Mr. Romney would raise taxes on the middle class. Instead, the plan might add to the deficit, make smaller cuts to marginal tax rates or take away preferential rates on investments and savings.

Former President Clinton avoided this problem, as Bloomberg noted, because "he showed the possible choices that Romney’s constraints would force."

It does seem a bit unfair that Democrats would be criticized for stretching the truth about Romney's tax and spending policies precisely because his plans are so slippery and unworkable.

Incidentally, the Times also called out some Democrats for repeating the Romney line I've discussed about him allegedly liking to fire people. Fair point. Then again, the Republicans made a similar untruth the organizing theme of the convention.

Also, Democrats are essentially accused of hypocrisy for claiming that anti-terrorism initiatives will not "run afoul" of civil liberties or constitutional protections. Again, fair point. The drone war is deeply unsettling.

Unfortunately, the problem is primarily that President Obama has not reversed all of the egregious policies initiated by George W. Bush and other predecessors in the Oval office.