This is my annual post about the new movies I watched in 2020. It is not a comprehensive list of every film I saw -- just the ones that were released this year. There is some slight overlap with last year's list because a couple of the 2019 Traverse City Film Festival films I saw were not commercially released until 2020.

Needless to say, I saw nearly all of these films at home rather than at my local multiplex. I think the last movie I saw in the cinema was Little Women in December 2019. On Long Island. I vividly recall the experience and miss it dearly.
The top tier list:


**I saw these films at the 2019 Traverse City film festival, but they actually had a 2020 release date.

This is my annual post listing books I read in the most recent year. I have done this annually since 2005 -- here's a link to the 2019 list if you want to work backwards. I accidentally published this 2020 list on December 30, but I'm editing the post on the 31st to add some narrative detail.
The list is not comprehensive. I read an unlisted book for an academic review, but that is not yet published so I'm not (yet) listing it here. I also read a couple of other academic books for a promotion case, which I'll never list.
I posted short reviews of most of these books at Goodreads.

Non-Fiction
Steven Levitsky and Daniel Ziblatt, How Democracies Die
Ben Lindbergh and Sam Miller, The Only Rule Is It Has to Work
Randall Schweller, Maxwell's Demon and the Golden Apple: Global Discord in the New Millennium
John Lithgow, Trumpty Dumpty Wanted a Crown
Karen Greenberg (ed.), Re
Masha Gessen, Surviving Autocracy
John Mearsheimer and Stephen Walt, The Israel Lobby
Joyce Kaufman, A Concise History of US Foreign Policy
Ronnie Lipschutz, The Constitution of Imperium
Adam Kucharski, The Perfect Bet
Nick Hornby, More Baths, Less Talking
Leonard Koppett, The New Thinking Fan's Guide to Baseball
The Levistky and Ziblatt book was probably the most important book I read all year. Indeed, I assigned some excerpts in a couple of classes, encouraged my spouse to read it, and recommended it to others. Anyone worried about the drift of America away from democracy would find valuable insight.
The Lindbergh and Miller book was the best baseball book I've read in some years as the analytical authors got to apply their ideas about baseball to a low-level independent league team in California.
Lithgow's book of poetry is a quick and entertaining read.
Schweller's book had a very interesting last chapter that made it valuable. About ten days ago I wrote a thread about it on twitter.
My review of the Greenberg volume was published online in January 2021 at H-DIPLO.
Kaufman I assigned as a recommended text in my spring US foreign policy class. It is reasonably short and served its purpose.
Most of the rest of the books were OK, but all had some key flaws. I had high hopes for Kucharski, but it really didn't stick with me. Koppett's book is often listed on "best of" baseball booklists, but I found it much less interesting than I might have twenty years ago -- given what we've learned about the game even in the last decade.
Literature and Genre Fiction
Emily St. John Mandel, Station Eleven
Shawna Seed, Identity
Philip Kerr, The Pale Criminal
Kate Atkinson, One Good Turn
Michael Dibdin, Vendetta
Ross MacDonald, The Instant Enemy
Lawrence Block, The Girl with the Long Green Heart
Charles Portis, True Grit
John Macdonald, Cinnamon Skin
Agatha Christie, The Murder of Roger Ackroyd
Len Deighton, Spy Story
Richard Stark, The Green Eagle Score
Robert Parker Valediction
Nick Hornby, State of the Union
Chester Himes, The Real Cool Killers
Denis Johnson, The Laughing Monsters
Sue Grafton, J is for Judgment
Ruth Rendell, Sins of the Father
Charles Willeford, The Way We Die Now
Walter Mosley, Gone Fishin'
Joe Kremer, Brainstorm
Lawrence Block, Eight Million Ways to Die
R.D. Rosen Fadeaway
John Lange, Grave Descend
I read Station Eleven very early during the quarantine -- it's about life in a post-pandemic world that has suffered "the big one." Frightening and interesting.
Shawna Seed's book is well worth your time. I knew her when we were both undergrads at Kansas -- she had been friends in high schoo with one of my roommates and ended up dating my other roomie. We've occasionally stayed in touch over the years.
You'll notice a lot of genre fiction on this list, mostly crime novels. The best of the group are nearer to the top, meaning I really liked Kerr's work set in 1930s Germany as well as Atkinson's book set during Fringe in Edinburgh and Dibdin's book set in Italy. Maybe I was missing the fact that I was unable to travel to Europe in 2020 after having done so in both 2018 (Ireland and Belgium) and 2019 (Scotland and Germany).
With Levitsky and Ziblatt, Lithgow, Gessen, Schweller, and Kerr, as well as Mandel, I spent a fair amount of my leisure reading time thinking about real-world politics in the US and beyond.
On that note, I'd add that Block's first book listed above is about a group of con artists that are able to fool some level-headed people, including some who should know better.

As I've previously blogged, I've walked many of Louisville's nearby cemeteries this year -- it's a way to get some exercise while avoiding other people during a pandemic.
Months ago, I walked to one of the city's most famous burial grounds, Cave Hill, and found the grave of Major League Baseball player Pete Browning, who played in Louisville for the Colonels during the 1880s and died in 1905.
Browning was a star player, leading his league in hitting three times and compiling an overall record that arguably should have landed him in the Baseball Hall of Fame in Cooperstown. He twice led his league in on base average and once in slugging, and twice led in OPS+, which is a ballpark adjusted measure of offensive contributions based upon on base average plus slugging percentage. The guy could hit.
His nickname was "The Louisville Slugger."
Browning is buried within walking distance of my home -- and not far from Colonel Sanders and Muhammed Ali, two other local legends who are buried in the same cemetery. I've previously visited both of their gravesites as well. Paul Hornung is a 2020 addition, but I have not looked for his gravesite yet. 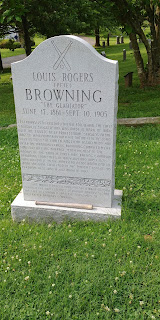