Allow me to repeat the groundrules: I will not list books that I reviewed, unless those reviews were published. In my academic job, I served until July as chair of a committee that will award $100,000 to a work that exhibited the best "ideas for improving world order." Most of the nominees submitted books and I read my share of the nominations. But those books are not listed here.

So, what did I read this year, mostly for pleasure? (Some of the recommended books include a link to Powell's books; the blog receives a 7.5% commission on sales that begin via these links).

Theories of International Politics and Zombies by Daniel W. Drezner

Why Leaders Lie: The Truth About Lying in International Politics by John J. Mearsheimer.

Cowboys Full; The Story of Poker by James McManus.

The Education of a Poker Player by Herbert O. Yardley

The Book: Playing the Percentages in Baseball by Tom M. Tango, Mitchel Lichtman and Andrew Dolphin.

Stone Me: The Wit and Wisdom of Keith Richards by Mark Blake

I also read just about every word in Baseball Prospectus 2011, but not in cover-to-cover fashion. It was edited by Steven Goldman.

Of these non-fiction books, most were worth reading. I read several of the relatively short international relations books to see if any of them would be appropriate for my various classes. In the right circumstances, I would not hesitate to use the Drezner book. Additionally, the passport-sized Hulsman and Mitchell volume might be useful for my film class.

I enjoyed the Quester and Mearsheimer books, but these are not the best works by these prolific authors. Both are readable and full of interesting examples, but they are not must-read works. Likewise, I found this Bacevich work (assigned in a spring class) a bit more polemical than his prior books. Plus, the historical sections and analysis were not up too his typical standard.

Yardley's Education of a Poker Player is considered a gambling classic, but I did not find it indispensable. By contrast, if you play small-stakes poker, the Miller, Sklansky and Malmuth volume is first-rate. The 500-page McManus tome is certainly very informative, but it is an odd book and not as compelling as Positively Fifth Street. The work covers poker history, includes many anecdotes about famous poker games and players, and surveys the rise of the World Series of Poker. The author has interesting personal experiences in the WSOP, but those are covered extensively in the older work.

Bill James is a seminal sabermetric-minded baseball writer. However, the Gold Mine books are not exactly packed with riveting information. Still, the book was worth my time if only for a few key short essays included in the volume. The Book is a somewhat difficult-to-read baseball book, but it is densely packed with tactically (and sometimes strategically) useful baseball information. Too bad The Book's authors didn't work with James on one magnificent book.

Keith Richards can be hilarious, but this book of quips is too short.

The Plot Against America by Philip Roth

Rabbit is Rich by John Updike

All the Pretty Horses by Cormac McCarthy

A Coffin for Dimitrios by Eric Ambler

The Black Echo by Michael Connelly

The Wrong Case by James Crumley

B is for Burglar by Sue Grafton.

The Sins of the Fathers by Lawrence Block

The Godwulf Manuscript (Spenser, Bk 1) by Robert B. Parker

The Girl Who Played With Fire by Stieg Larsson.

The Hunter: A Parker Novel by Richard Stark (aka Donald Westlake)

The Black Angel by Cornell Woolrich

Dress Her in Indigo by John D. Macdonald

The Barbarous Coast by Ross Macdonald

Perchance to Dream by Robert B. Parker

A Case of Lone Star by Kinky Friedman

The Greatest Slump of All-Time by David Carkeet.

The King's Game by John Nemo.

Of these, I placed the best works of literature at the top of the list, then the remaining genre fiction. The least entertaining are listed last in each section.

The novels by Roth, Updike, Hornby and O'Neill are all excellent. Roth and O'Neill were overtly influenced by 9/11, though Roth's book is actually a counterfactual history about events prior to World War II. What if Charles Lindbergh (sympathetic to Hitler) had been elected President over FDR? As I've written previously, Hornby is one of my favorite authors and this is an entertaining read about personal relationships and popular music. Yes, those were also the themes of the terrific High Fidelity.

I pick up Evelyn Waugh and Cormac McCarthy novels with the understanding that I may already have read their best books. Their other work reflects their great talent, but there's bound to be some disappointment. Gary Shteyngart is likewise a skilled writer, but I hope Absurdistan is not his masterpiece.

Thanks mostly to Bookmooch and PaperBack Swap, I continue to read books by a diverse group of crime writers. Eric Ambler was recommended highly by someone on Journolist. I'm grateful to that person, though I cannot recall his or her identity.

I much-enjoyed Michael Connelly's first Harry Bosch book and will continue with the series. Likewise, James Crumley's Milo Milodragovitch is an interesting character and I look forward to reading additional stories about him. Robert Parker's Spencer books are entertaining, so I decided to start at the beginning of his series as well -- though I've previously read at least one of the later books. The second volume in the Millennium trilogy by Stieg Larsson is not as good as the first book, but I still intend to read the third one in the near future.

Cornell Woolrich was very talented at generating creepy atmosphere and I've already acquired a couple of his other works. That is traditionally Stephen King's domain, but Blaze is a strange crime novel published as his Richard Bachman alias. I think the book's smart writing suffers by featuring a mentally-challenged lead character.

Donald Westlake and Lawrence Block have written dozens of crime-themed novels over the decades. I enjoyed Westlake's more humorous burglary story about a stolen diamond than the first book in his brutal Parker series. I'll read the next volume in each line, however. Likewise, I'll be reading more cases featuring Block's dedicated, thoughtful, and drunken detective Matt Scudder.

As I've noted previously, John D. Macdonald's Travis McGee stories provide a pleasant diversion, but Ross Macdonald's books tend to have a harder edge. Both offer up a good measure of amateur philosophy as well. April Evil is a stand-alone noir fiction -- and it has a harder edge. Grafton says Ross Macdonald is an influence and I enjoyed her second alphabet mystery story. I read her A is for Alibi back in the mid-1990s, but won't wait very long to start C is for Corpse.

I cannot recommend the Swain book about a casino detective and I have tired of Kinky Friedman's redundant prose. Christopher Buckley has written some entertaining books, but The Supreme Courtship is far down his list of accomplishments.

If you are looking for baseball fiction, I enjoyed Carkeet's psychological approach to the game's players, but was less taken with the religious-themed novel by Nemo.

Email ThisBlogThis!Share to TwitterShare to FacebookShare to Pinterest
Labels: books

Henry Farrell wrote a great line in his review of David Marquand's The End of the West; The Once and Future Europe (Princeton, 2011) for The Nation (pdf), December 12, 2011:

It is tempting to see the procedures of the EU as a long-term conspiracy to bore the public into submission.

In the next sentences, Farrell retreats a bit from this statement. The institution churns out regulations that Farrell notes are boring and hard to understand, but this result was not produced as a result of top-level secret planning: "The truth is more mundane. Europe’s leaders fell into technocracy by accident rather than design."

One consequence of this reality is the so-called institutional "deficit of democracy" that was met this year by protesters claiming to represent the bottom 99% of us. We'll see in 2012 and beyond if the EU is influenced by their frustration. This EU statement does not seem promising.

Do not confuse this man for the real Santa Claus: 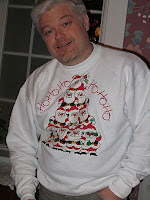 That photo is from 2010, when we spent the holiday at home.

This year, we've hit the road: 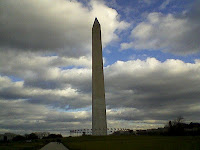 A few days ago, the good folks at Baseball Prospectus announced that they are soon releasing a 2-volume Best of Baseball Prospectus: 1996-2011. I think it is going to include a mix of web articles and book pieces, as well as some new essays. It would likely make an excellent Christmas gift.

So far as I know, unfortunately, it will not include my two old pieces written for BP many years ago. One of those articles is still available on-line at the BP website: "Do Top Prospects Get Traded?" It was posted April 8, 1999.

However, the other one is apparently not to be found anywhere. It was a defense of then-KC Royals manager Bob Boone, written in response to a piece by Rany Jazayerli. On the Wayback Machine, I found Rany's critique of Bob Boone posted March 3, 1997: "Is There a 12-Step Program for Overmanagement?"

Rany and I are both KC fans and we co-authored the Royals team comments for the Davenport Translations published exclusively on the web (in the group rec.sports.baseball.analysis) during the 1994-1995 winter. Unfortunately, I cannot find those team comments on the web either -- though I did find them for nearly 20 other teams. And I have the February 1995 files on my hard drive.

Sorry for the silence lately. We traveled for Thanksgiving and I'm really making a push on the book project since the current sabbatical ends in four weeks.

Meanwhile, over at Duck of Minerva, you can read my post from November 30 on "Comprehending Gingrich." Does he have a Belgian pro-colonial worldview?

November 7 on the Duck, I posted "Hans Beinholtz: Europe For Sale." That post is basically a funny Stephen Colbert video about the Euro-crisis.

At the e-IR Climate Politics: IR and the Environment blog, I posted "The US is Not a Climate Outlaw?" on November 21. It is part 2 about my October talk at Cardiff University in Wales.