This week, to begin the new school year, my class on "Global Politics Through Film" viewed "Stranger Than Fiction." If you haven't seen it, Will Ferrell plays an IRS tax auditor named Harold Crick. Roger Ebert explains why Crick turns to a literature professor in order to understand different kinds of narratives.


Harold begins to hear a voice in his head, one that is describing his own life -- not in advance, but as a narrative that has just happened. He seeks counsel from a shrink (Linda Hunt) and convinced he is hearing his own life narrative, seeks counsel from Jules Hilbert, a literature professor (Dustin Hoffman). Hilbert methodically checks off genres and archetypes and comes up with a list of living authors who could plausibly be writing the "narration." He misses, however, Kay Eiffel (Emma Thompson), because he decides Harold's story is a comedy, and all of her novels end in death. However, Eiffel is indeed writing the story of Harold's life.

Anyway, I'm posting the following video because the song "(I'd Go the) Whole Wide World" by Wreckless Eric figures prominently in a key scene. Since watching the film on Tuesday, it has been an earworm that I cannot escape:

Last week, at a reception following the first Department faculty meeting of the new academic term, a few colleagues and I discussed the comparative abilities of automobile drivers from different parts of the country. The discussion may have been sparked by the presence of a new colleague from a part of the U.S. quite distant from Kentucky.

As it happens, one Department faculty member has posted a list of states ranked by the relative (in)abilities of their drivers. One of the group borrowed the list from her bulletin board and we discussed the rankings. In case you have not seen the list somewhere else, the list was compiled from a study by car insurers that uses "data from three sources: the National Highway Transportation Safety Administration (driving fatalities), the American Motorists Association (which states hand out the most tickets), and MADD (drunk drivers)."

In the study, Louisiana is said to have the worst drivers, followed by Missouri, Texas. and Florida. Kentucky drivers rated 7th-worst (note: Louisville schools do not provide driver's education). The list of states with the worst drivers is mostly comprised of states located in red (and southern) parts of America as it also includes Oklahoma, Arizona, Alabama and South Carolina. Montana was 9th.

About that same time last week, I read Joshua Hammer's related story about driving in Africa in the July/August issue of The Atlantic. He points out an interesting correlation:


According to Tom Vanderbilt, the author of Traffic: Why We Drive the Way We Do (and What It Says About Us), “Traffic behavior is more or less directly related to levels of government corruption.” Vanderbilt cites a clear correlation between traffic-fatality rates per miles driven and a country’s ranking on Transparency International’s corruption index. (In terms of road safety, the Scandinavian countries fare the best; Nigeria is near the bottom of the list.)

To check the domestic situation, I found a list published in the NY Times in December 2008 that used a decade's worth of federal public corruption convictions to rank U.S. states by political corruption. The study placed Louisiana, Kentucky, Alabama, Mississippi, Montana, and Florida in the top 10 (excluding Guam, Virgin Islands, Puerto Rico and DC).

So, just eyeballing these results, a U.S. correlation seems to align with a global correlation.

While searching around the internet looking into this relationship, I found an interesting tidbit from Anneli Rufus at The Daily Beast (referencing GMAC Insurance Company data): "Kansas is home to the nation’s best-prepared drivers." As a young Kansan, I received my first driver's license at age 14 years and 6 months and participated in driver's education in junior high school (to be fair, today's 9th graders are often educated in high schools).

I unearthed the following list of books and accompanying instructions on Duck of Minerva while searching for something else. The list can apparently be found on many other blogs if you look around for  it. Bill Petti posted it in February 2006, so this is an old meme among academic and other bloggers:

Some bloggers add this line to the instructions: "Pass it on."

I also clarified my status in that some of the underlined books are owned by other readers in my home, but I'm only likely to read the ones in italics.

So, of the 50 books listed, I've read 22 and have immediate access to another 3 that I intend to read. I might read 15 or so of the others eventually. Yes, I'm stubborn about Harry Potter. The Hunger Games trilogy is not on this old list, but I have been thinking about reading it and it is on a shelf in this house. I think I enjoyed the film version more than I enjoyed any of the Potter movies.


Update: added yellow highlighting to indicate books read since this was posted.

We're back from our (almost) annual trip to Michigan. This is the lighthouse in Ludington, where we spent a couple of days and one night: 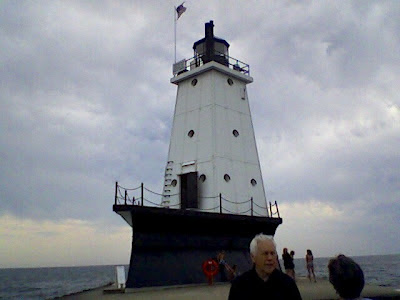 If you ever visit Ludington, I'd recommend taking a picnic to the beach. The local Best Choice Market had a terrific deli for sandwiches and salads, assorted veggies, and a nice selection of local brews.