You can find some of my other recent blogging at these websites:

On e-IR, my Climate Politics: IR and the Environment blog, I posted "Is the US a Climate Outlaw?" on October 20. This is part one, which argues that the U.S. can be viewed as an outlaw.

At the Duck of Minerva group IR blog, I blogged "War and the Eurozone" on October 28. The post notes some recent striking rhetoric by European conservatives in power.

Also at the Duck, I blogged "Graduation Rates" on October 26. What can we make of the apparent disparity in graduation rates between athletes and the regular student population?

Earlier today, I took a peak at the Kansas basketball schedule for the 2011-12 season. On November 15, the Jayhawks play against Kentucky, a school with 7 NCAA basketball titles in its past. Then, on the 21st, Georgetown (1 title) is the foe. Depending upon results in the Maui Invitation Tournament, their next two opponents over the following two days could be UCLA (11) and Duke (4).

In other words, over a 9 day span, Kansas could face a veritable who's-who of college basketball history -- 23 titles won. Then, on December 10, the team plays against Ohio State (1).

The NCAA tournament apparently dates to 1939, so there have been 73 titlists. Kansas has 3 championship banners of its own. Conference rival Oklahoma State, a team KU will face after the new year, also won 2 titles back in the 1940s.

I've been a fan of the Rolling Stones (TGRNRBITW?) for decades, so I asked my youngest daughter to snap this photo when we stopped by the National Portrait Gallery near the theatre district. I wanted to see the small exhibit. 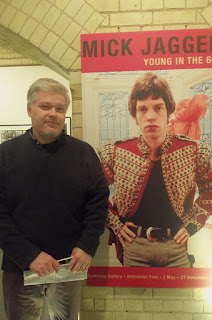 The exhibition "Mick Jagger: Young in the 60s" runs through 27 November.

For balance, I also read Stone Me: The Wit and Wisdom of Keith Richards, which was compiled by Mark Blake. As Richards says in the book in regard to Mick Jagger, "My aim is always to try to introduce a bit of levity into his life."

Update: Since I included the Jagger photo, I wanted to post a picture of my debate colleague from freshman-year at Kansas, Dave McCullough. People used to say there was some resemblance, and he used to go around in a hick voice quoting a funny line about Margaret Trudeau that Steve Martin delivered on "Saturday Night Live." 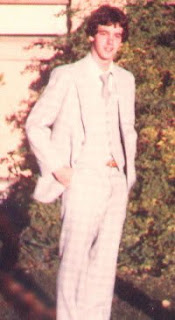 Whenever I travel to England, this baseball fan becomes something of a cricket fan. For example, I watched much of this one day international match on television last week.

In preparation for the England trip, I obtained a copy of Joseph O'Neill's award-winning novel Netherland, which features a good deal of cricket. Near the end of the book (pp. 210-11), which I read while traveling, I was particularly struck by a long speech delivered by an important character -- Chuck, a small-time criminal (and thug?) originally from Trinidad -- who explains the importance of cricket for global politics:

"Trobriand Island is part of Papua New Guinea," Chuck said professorially. "When the British missionaries arrived there, the native tribes were constantly fighting and killing each other--had been for thousands of years. So what did the missionaries do? They taught them cricket. They took these Stone Age guys and gave them cricket bats and cricket balls and taught them a game with rules and umpires. You ask people to agree to complicated rules and regulations? That's like a crash course in democracy. Plus--and this is key--the game forced them to share a field for days with their enemies, forced them to provide hospitality and places to sleep. Hans, that kind of closeness changes the way you think about somebody. No other sport makes this happen."

The main character of the book, his friend Hans, asks Chuck if he is implying that "Americans are savages?"

"No," Chuck said. "I'm saying that people, all people, Americans, whoever, are at their most civilized when they're playing cricket. What's the first thing that happens when Pakistan and India make peace? They play a cricket match. Cricket is instructive, Hans. It has a moral angle. I really believe this. Everybody who plans the game benefits from it. So I say, why not Americans?"

In the book, this exchange is made more interesting because Hans's estranged wife had warned of America's hawkishness in the run-up to the Iraq war. Indeed, she abandoned Hans in NYC after the 9/11 attacks, but before the start of the Iraq war.

Chuck ultimately fails to achieve his dream of making cricket a major sport in the US -- and as revealed early in the story, becomes the victim of an act of violence that kills him. Various characters eventually affirm that Chuck's plan had been doomed all along.

Chuck's business failure and murder seem to demonstrate America's savage nature after all -- though another reading would emphasize Chuck's violent business dealings (despite the fact that he loves cricket). Like his wife, Hans ultimately abandons his adopted NY home and returns to England where his wife has moved with their child. And where cricket is significant.

Like every good novel, this one makes the reader think. Whatever point O'Neill is making about American foreign policy, it is interesting that the primary characters are all immigrants (strangers in a strange land?) who feel a fairly strong love for America -- right up until the day they depart for Europe or die.

Back in the USA

For a bit more than 2 weeks, I've been in the UK. About a week of that was personal time with family in Brighton. From there, I went to Bristol Tuesday October 18 to speak to the International Affairs Society on "The Future of World Order." The turnout was very good and the Q&A was terrific. Thanks to my hosts Eric Herring and Bryn Larkman.

Thursday the 20th, I spoke at Cardiff's School of European Studies on ‘Is the US a Climate Outlaw? Can it be “Scared Straight”?’ Stephen McGlinchey of Cardiff (and E-IR) was an excellent host and I enjoyed spending time with many of his colleagues as well.

Then, Saturday the 22nd, I delivered my promised paper on "Cooperative Security: Grand Strategy Meets Critical Theory?" at the LSE/Millennium conference.

Sorry for the lack of posting -- intermittent wi-fi, train travel locally, and other factors kept me quiet. I did post to twitter fairly regularly over the period.

Learned: Bristol claims British street artist Banksy and has a couple of pieces in its (free) museum. Here's one:

I finished the paper for the LSE/Millennium conference to be delivered October 22. This link should work: "Cooperative Security: Grand Strategy Meets Critical Theory?"

Additionally, I spent some time this past week adding a bunch of my papers and publications to my Academia.edu page. If you have journal access from a university, virtually all the open/download links will work. Some of the links should work for anyone.

If you really need one of my papers, shoot me an email.

Is Occupy Wall Street fueling a populist political movement on the left that can pave the way to new economic stimulus, dramatic economic reforms in the tax code, or whatever else they might seek? I'm not trying for cheap snark -- but they have been somewhat unclear about their goals.

Could the protest movement even help energize voters on the political left, in the same way the tea party did on the right in 2010, and thus help Barack Obama and other Democrats find victory in November 2012?

Or, as my Duck of Minerva colleague Megan MacKenzie argued today, should the White House be ashamed for ignoring (and thereby "insulting") the anti-Wall Street populism for the past 10 days?

I have to disagree with Megan on this one.

Sunday, Obama blasted Bank of America for its $5 fee on debit card users. "You don’t have some inherent right just to, you know, get a certain amount of profit, if your customers are being mistreated,” he said. Later, he added, “this is exactly the sort of stuff that folks are frustrated by.” Was that a nod to the protesters? It sure sounds like they are on the same side.

The National Journal today criticized the President for his overt "tax the rich" populism -- an approach some of his advisors apparently think will fail in key swing states. Steve Benen dismissed that take, however.

A month ago, independents sided with the GOP by a five-point margin on creating jobs, but now we independents siding with Obama by 13 points. That’s a pretty dramatic swing in a fairly short period of time, suggesting that those arguing that the president is driving independent voters away with his new economic message have this precisely backwards.

Google the White House website for "Wall Street" and you learn that the President or his chief spokespersons have been demonizing Wall Street in some way almost every day -- and pointing out that their reform law was aimed at tightening regulation. Here's a sample from September 30:

frankly, we had seen the rules tilted against ordinary folks in favor of those who were well connected in Washington or powerful on Wall Street.

And we argued in 2008 -- and we captured I think the imaginations of a lot of people -- that we could bring about some fundamental change if we got past some of the partisan rancor and the constant politicking that had come to characterize Washington.

Treasury Secretary Tim Geithner today emphasized "shock" that Wall Street itself has turned against President Obama -- and he expressed (somewhat incoherent) sympathy for the concerns of those who Occupy Wall Street. For the new populist Obama, it is desirable for Wall Street to hate you. "The enemy of my enemy is my friend," right?

“He [Obama] gets genuinely pissed off at the banks; it’s not an act,” said Jared Bernstein, a former adviser to Vice President Joe Biden, who participated in Obama’s daily economic briefing in the Oval Office for the first year of the administration.... “The angriest I ever saw the president was when we found out about those bonuses,” he said. [The banking industry] is like a Doberman he found by the side of the road, nursed back to health, only to have them jump up and bite him.

Our newly populist president has seen his poll numbers drop month-after-month. I do not know if his new economic message will reverse those trends, but it does appear as if he's rolled up his sleeves for a fight with Wall Street. And in doing that, he's with the Occupy Wall Street crowd.