The title of this post is a line most closely associated with former Alaska Governor Sarah Palin.

Despite her repetition of this phrase over the past two years, the United States has maintained a moratorium it established nearly 30 years, which precluded offshore oil exploration. Candidate Barack Obama pledged to maintain that moratorium, especially in the summer of 2008 when presidential opponent John McCain flip-flopped his position on the issue and began opposing a moratorium he previously supported.

So today we’re announcing the expansion of offshore oil and gas exploration, but in ways that balance the need to harness domestic energy resources and the need to protect America’s natural resources. Under the leadership of Secretary Salazar, we’ll employ new technologies that reduce the impact of oil exploration. We’ll protect areas that are vital to tourism, the environment, and our national security. And we’ll be guided not by political ideology, but by scientific evidence.

That's why my administration will consider potential areas for development in the mid and south Atlantic and the Gulf of Mexico, while studying and protecting sensitive areas in the Arctic. That’s why we’ll continue to support development of leased areas off the North Slope of Alaska...

“When I hear McCain say that he is now in favor of the same oil drilling off the coast that he was opposed to just a week ago, what he doesn't tell you is that George Bush's own energy department has said that this would have no impact on consumers until 2030," he said, "no appreciable impact for the next 22 years. Something they're not telling consumers.”

"John McCain's proposal, George Bush's proposal, to drill offshore here in Florida and other places would not provide families any relief this year, next year, five years from now," he said with Florida coastal waters behind him. "We can't drill our way out of the problems we're facing," he said tapping the podium for emphasis.

Clearly, Obama's remarks in 2010 signal his understanding of the problem with this flip-flop. He says this will be part of a broader energy strategy, with care given to preserve the environment. Strategically, this may be aimed at obtaining congressional support for the energy policy (which is also linked to the climate policy, for obvious reasons).

In any case, regardless of a potential strategic political rationale, will people living in coastal areas and environmentalists attack this new policy? After all, the moratorium has long been popular with those constituencies. I do not think that the Sierra Club will give in on this issue just because Obama's EPA is planning to regulate greenhouse gas emissions.


Visit this blog's homepage.
Posted by Rodger A. Payne at Wednesday, March 31, 2010 No comments:

Today, on the Duck of Minerva group IR blog, I posted "The Latest on U.S. Militarism," concerning the high profile positions attained by many former generals and admirals within the civilian foreign policy bureaucracy.

March 10, I posted "The Hurt Locker, again," which is my interpretation (and review) of the Oscar-winning film.

On March 8, I blogged "Foreign Policy Charade" about the ongoing Israeli occupation of Palestine and the indirect U.S. support of that policy.

February 27, you can find "Biological Weapons," which is a bit of shameless self-promotion concerning my latest coauthored journal article, "The Illogic of the Biological Weapons Taboo." I wrote the piece for Strategic Studies Quarterly with former student (and biochemist) Phil McCauley. It considers whether the Bush Doctrine is still alive and well and ready to take the U.S. to war over bioweapons.

Finally, on March 12, I posted about "Comic book sensibility" at the Climate Change blog I write for e-IR. You know, "one for all and all for one." The phrase was used in an important climate speech by chief U.S. negotiator Todd Stern.

I entered several NCAA pools this year, though none of them appear to involve gambling. This is one of my typical brackets. I picked a few extra upsets in a pool weighted towards rewarding them and made a few different tactical choices in a pool involving some local players. In my other pools, Kansas beats Duke in the final. In those, I typically have West Virginia beating Kentucky in the Elite Eight. 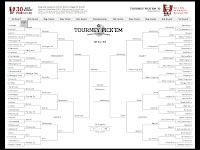 Visit this blog's homepage.
Posted by Rodger A. Payne at Thursday, March 18, 2010 No comments:

Next fall, I'm teaching "Global Politics Through Film" as a section of our Department capstone course. Thus, in search of possible replacement movies for the films I've been using for several years, I've been trying to watch a number of important films on my list of unseen films.

In addition to "In the Loop," not long ago I finally saw "Lord of the Flies" (1990). The story is familiar to most high school English students, but I wanted to see how the film version might work in a contemporary college classroom. Cynthia Weber recommends using the film to illustrate a Hobbesian "state of nature" (anarchy), though she prefers the 1963 British version. Since I didn't find the 1990 version all that compelling, I hope to see the 1963 print before fall.

Monday, I viewed "Paradise Now" (2005), which is about two would-be Palestinian suicide bombers. The film addresses the Israeli occupation from the Palestinian perspective, but various characters make the argument for non-violent means to pursue their legitimate ends. Unfortunately, the version I saved from Encore was dubbed and the voice talent was not appropriate to the film. It seemed to be a fine film for student papers on various subjects, but I will likely not use it for class narrative purposes.

Though it's not really pertinent to my class, on Sunday I watched the politically-themed film "A Face in the Crowd" (1957). Andy Griffith is terrific as a rising media force -- kind of a 1950s Glenn Beck. This comparison to Lonesome Rhodes is common in the blogosphere.


Visit this blog's homepage.
Posted by Rodger A. Payne at Wednesday, March 17, 2010 No comments:

DVD Pick of the Week

This past week, I watched and very much enjoyed "In the Loop." The film is a political satire of the first rank. This quote is from the film's webpage:

With razor-sharp, truly laugh-out-loud dialogue the film pokes fun at the absurdity and ineptitude of our highest leaders. With everyone looking out for number one, and the fate of the free world at stake (but apparently incidental), the hilarious ensemble cast of characters bumbles its way through Machiavellian political dealings, across continents, and toward comic resolutions that are unforeseeable.

James Gandolfini is terrific in a significant post-Sopranos role as a dove in the Pentagon, but Scottish actor Peter Capaldi owns the film as a political flack for her Majesty's government.

If you don't know about the story, suffice to say that the U.S. and U.K. are headed to a war that seems to be favored by a crafty spin-doctor and a well-positioned neoconservative (plus his young followers), but is opposed by almost everyone else. The intelligence evidence for war is based on weak foreign sources or is simply fabricated whole-cloth. The "insider" war opponents are revealed to be weak-willed ineffective careerists.

Warning: if you remember former child actor Anna Chlumsky from "Uncle Buck" and "My Girl," then the movie may make you feel old. She's nearly 30 now...

My most recent example comes from Matthew Hoh, the former U.S. Foreign Service officer who resigned his post in protest of American strategy in Afghanistan:

"We're not getting at the root issues," says Hoh, the former Foreign Service officer. "We don't like to admit that, in the case of Afghanistan, maybe our presence is making the situation worse. That maybe these people are fighting because they don't want to be occupied. ... Remember the film Red Dawn? All of us, we talked about it a lot, all of us always thought we'd be on the other side of Red Dawn -- we didn't think we'd be the ones with the attack helicopters. ... So it's a very humbling experience to realize, you know, we're the occupying power."

As the American Prospect article from March 2010 points out, the Obama "administration admits that fewer than 100 al-Qaeda terrorists remain in Afghanistan."

And whatever happened to that civilian surge?

When it comes to their paper packaging decisions they are contributing to large scale clearcutting and conversion of natural forests to sterile pine plantations which has disastrous impacts on the biodiversity of Southern forests and communities.

When it comes to paper packaging choices, Yum! Brands has no clear plans for increasing its use of purchases of post consumer recycled paper or ensuring that its paper is certified by FSC standards –the only independent global certification system in the world accepted by the conservation, aboriginal and business communities.

Yum! is a major sponsor of University athletics. The basketball/volleyball practice facility is named after the corporation.

In the world of corporate social responsibility, it's never good to be compared unfavorably to Wal-mart, McDonald's or Starbucks. Each of those companies has previously been targeted in specific NGO campaigns.

Visit this blog's homepage.
Posted by Rodger A. Payne at Wednesday, March 10, 2010 No comments: