As I've written previously, I watch a lot of movies, though most are viewed as DVDs on my television. Because I do not see that many films in the theater, it can be difficult for me to write a post on the year's best movies (of 2009, or any other year).

To make this rank-ordered 2009 list, I scanned the top 150 grossing movies of 2008, as well as IMDB's most popular titles for 2009 (and their most popular by average vote list). These were the only 2009 films I saw this year, so far as I know. Those marked with asterisks were viewed in a theater:

And here's the annual list of movies I intend to see in the future (hopefully in 2010): (500) Days of Summer, Amreeka, The Baader Meinhof Complex, Broken Embraces, Bronson, Brothers, The Brothers Bloom, Brüno, Cloud 9, The Cove, Crossing Over, The Damned United, An Education, Fantastic Mr. Fox, Funny People, The Girlfriend Experience, Humpday, The Hurt Locker, I Love You Man, Inglourious Basterds, The Informant!, In The Loop, Invention of Lying, The Maid, The Men Who Stare at Goats, The Messenger, Moon, Paranormal Activity, Pirate Radio, Precious, Public Enemies, The Road, A Serious Man, Skin, Star Trek, State of Play, Taking Woodstock, The Evening Sun, Up, Up in the Air, Watchmen, Whatever Works, Whip It, White Collar, and Zombieland.


Note: I did not provide links to the Powell's Bookstore website, where you can buy DVDs of many of the films listed in this post. However, if you buy books or DVDs from my link, I receive a 7.5% sales commission. All funds are used to operate this blog -- or will be gambled away at my monthly poker game.

Powell's is a great independent bookstore -- always a highlight of my trips to Portland -- with union representation, tremendous selection, and reduced-price used or sale books.


Visit this blog's homepage.
Posted by Rodger A. Payne at Thursday, December 31, 2009 No comments:

Tragically, my old friend Scott Deatherage has died. I debated against him, then coached him for a year at Baylor. Later, after I joined him in the Chicago area, we were in a fantasy baseball league together for many years. Scott was a great guy -- and probably the most successful debate coach of all time. His teams won the National Debate Tournament 7 times.

Twenty-five years ago, in Waco, Scott told me he loved this song by CCR:


Visit this blog's homepage.
Posted by Rodger A. Payne at Saturday, December 26, 2009 No comments:

As baseball fans might expect, the list is dominated by sluggers -- notably the PED-tainted hitters Barry Bonds, Sammy Sosa and Manny Ramirez:

I've tried to avoid the impulse to make this an entire list of Barry Bonds stats, but even though he stopped playing before the end of it, Bonds dominated the decade like no other player has ever offensively dominated, since Babe Ruth himself.

While those numbers for the last two decades certainly sound inflated by steroids, it is worth noting that major league baseball included 30 teams throughout the 'aughts, but only 16 teams from 1900 until the 1961 expansion. The 1960s ended with major league baseball at 24 teams. Two teams were added in 1961 and 1962 and four teams were added in 1969, so figure just under 20 teams per year that decade. There were fully one-third more teams in the just-completed aughts than in the 1960s. The 1990s featured 28 teams until 1998 when two expansion teams were added.

Incidentally, with expansion, major league baseball increased the length of the season from 154 to 162 games. That's about a 5% increase and people typically remember it when they think of the controversy surrounding Roger Maris in 1961.

If someone like Remington had noted in December 1969 that the 1960s featured 5 players with 300 or more homer runs and no other decade had more than 3, he would certainly have been reminded about expansion and the longer season. The number of teams had grown by 25% in 1962, 50% by 1969.

Until 1960, decades typically had 16 teams playing 154 games (ignoring rainouts, etc.). That meant about 1232 games (it takes 2 teams to play a game). In the 2000s, by contrast, 30 teams playing 162 games each tallied roughly 2430 games, almost twice as many. Observers could reasonably expect a doubling of certain kinds of counting statistics -- like the number of players who reach a particular milestone.

I'm not saying steroids had nothing to do with the recent home run explosion, but it is frustrating to see people write about baseball as if the structure of the leagues and seasons was the same throughout its history. This is not a knock on Remington per se, as I've even seen this in SABR conversations. Members sometimes like to highlight Hall of Fame arguments by noting whether a player finished in the top 5 or 10 of a desirable statistical category. They refer to the "black ink" or "gray ink" tests -- and they overlook the fact that it is much harder to do this now in an expanded player pool.


Visit this blog's homepage.
Posted by Rodger A. Payne at Friday, December 18, 2009 No comments:

Though his website has been on my blogroll for years, I don't think I've ever mentioned Ken Pomeroy in a post. The silence reflects a selfish interest in winning NCAA tournament pools against people not as well-informed. I've admired Pomeroy's website since learning some years ago that the author had touted George Mason in its 2006 run to the Final Four. The local newspaper has also long promoted Pomeroy as the main college hoops statistical guru.

According to Pomeroy's system for evaluating college basketball, Kansas should be favored to win every game this season -- save for their road game against Texas in Austin. Given other probabilities, Pomeroy expects the Jayhawks to finish their schedule with a 28-3 record. According to his system, the team currently has the second best offense in the country, coupled with a top-10 defense. The 2008 national championship team from Lawrence had an equally good offense, but also had the nation's best defense. The 2009 team, which lost to UCLA in a regional final, had the sport's best defense, but only a top 20 offense.

In fact, great defense has been a hallmark of Bill Self's teams at KU. The 2007 team was tops in that category and the 2006 squad finished 2nd. His 2005 team was 18th, but had a great offense (11th) left over from Roy Williams.

The matchup against his system's #10 team Cal next Tuesday should be exciting and I'm also looking forward to the road date with #9 Tennessee on January 10.


Visit this blog's homepage.
Posted by Rodger A. Payne at Wednesday, December 16, 2009 No comments:

It's been a long time since I last posted pictures of the dogs. These photes of Paddy and Robey (the bigger dark brown one) are actually from August. 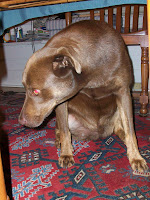 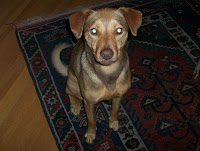 Visit this blog's homepage.
Posted by Rodger A. Payne at Saturday, December 12, 2009 No comments:

Nearly 10 years ago, the Independent Mystery Booksellers Association's online membership compiled a list of the 100 Favorite Mysteries of the Century.

Based on a quick edit of the list, it appears as if I've read the following 16 books (including a couple marked with ** read in 2009):

There are some excellent stories there. Most have also been made into films, which are also typically very good and worth viewing.

I may have read these 2 books as a teen, but I do not remember with certainty:

Doyle, Arthur Conan. The Hound of the Baskervilles (Berkley)
Queen, Ellery. Cat of Many Tails

These books are on nearby shelves, so I should be reading them soon:

There are many more books on the list that I intend to read eventually.

Disclosure: This blog receives a 7.5% commission on any books purchased through these recommended links to Powell's bookstore.


Visit this blog's homepage.
Posted by Rodger A. Payne at Tuesday, December 08, 2009 No comments:

I'm teaching American Foreign Policy in spring 2009 and have been thinking about how to discuss the transformation in policy from the Bush years. It's still early in the Obama term and not much academic writing has evaluated Obama's foreign policy. Katrina Vanden Heuvel recently provided a useful course:

The president's quartet of major speeches abroad--in Cairo, Prague, Moscow and Accra--began to lay out an Obama Doctrine in international affairs: support for diplomacy and the UN; commitment to a nuclear-free world; a belief that democracy is strengthened not through US intervention but when people win for themselves their rights and liberties; and engagement and cooperation with, rather than antagonism toward, the Muslim world.

Students will read these four speeches, plus the Af-Pak speech the President delivered last night.

I may well add the Nobel speech, but I want to read it first.


Visit this blog's homepage.
Posted by Rodger A. Payne at Wednesday, December 02, 2009 No comments: