I filled out a number of brackets this year, most forecasting the University of Kentucky to win the men's college national basketball championship. Unfortunately, I think that was and is the safest prediction.

Here are my only two entries in (different) pools that return cash from my friends and/or colleagues. I entered some other national competitions with microscopic chances of winning money from large prize pools. My chances in those pools is now essentially zero and was never very high. I did pick against Kentucky in some of those. Typically, I picked Arizona over UK since they are viewed as the nation's second best team.

This entry features Arizona in the Final Four. Also, I had West Virginia beating Maryland and Michigan State beating Virginia. I inaccurately had Louisville losing to Northern Iowa, so I clearly was betting against the ACC here: 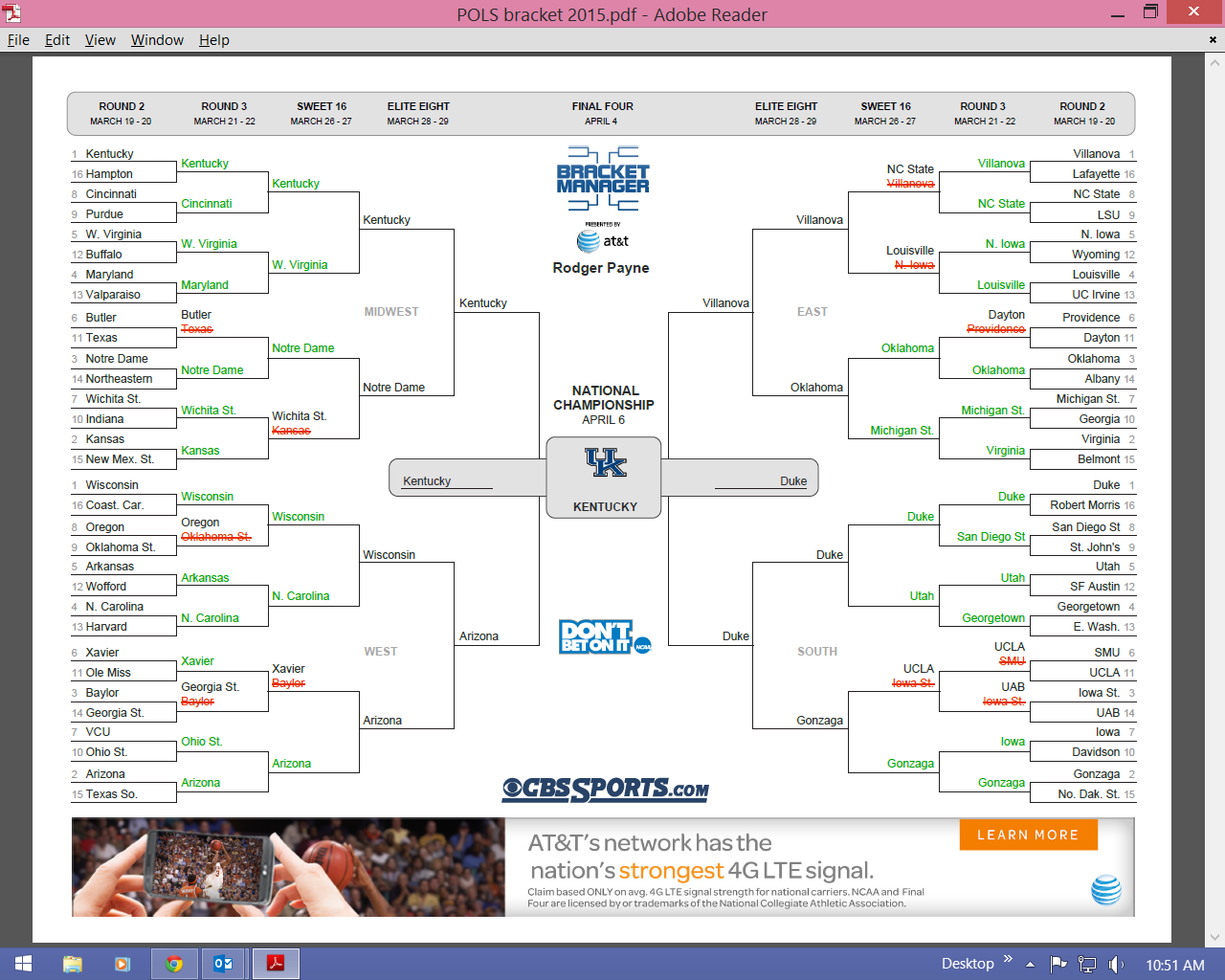 Entry 2 has Arizona in the Final Four, as well as Oklahoma. I accurately forecast Wichita State defeating Kansas in this bracket as well. Once again, I had too little faith in Louisville: 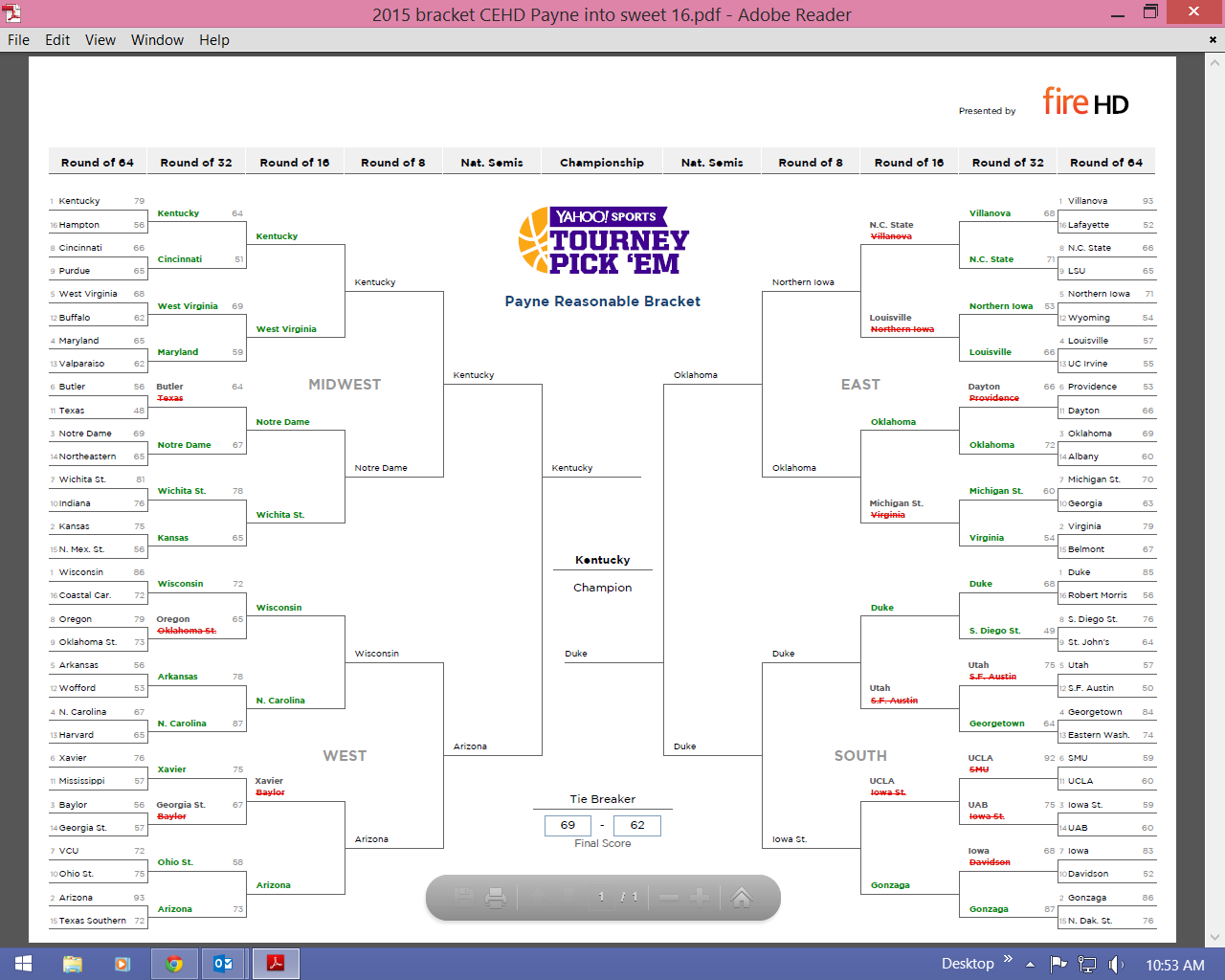 These photos were taken in nearby Tyler Park on Saturday, March 7: 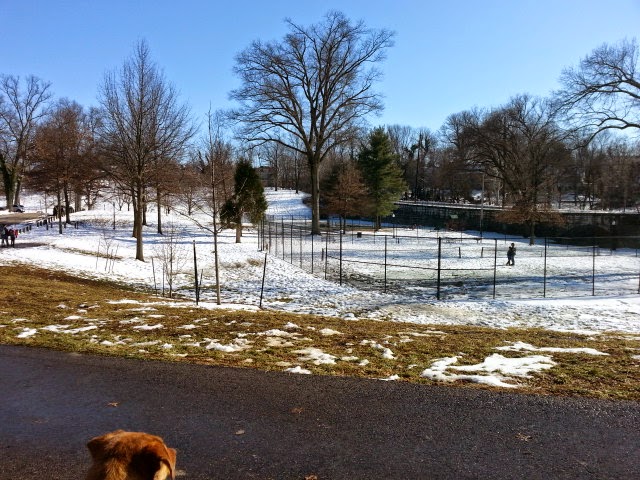 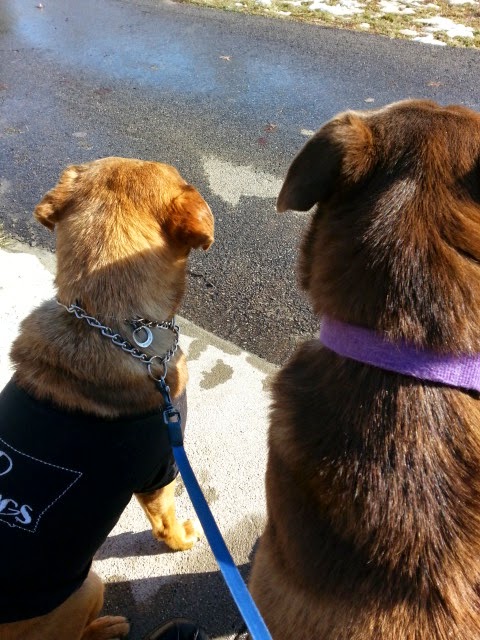 Paddy was wearing a jacket, but the 9" snow Louisville received on March 4-5 was already melting.

This photo was taken basically in the same spot, one week later on Saturday, March 14, just before University of Louisville's spring break began Monday the 16th: 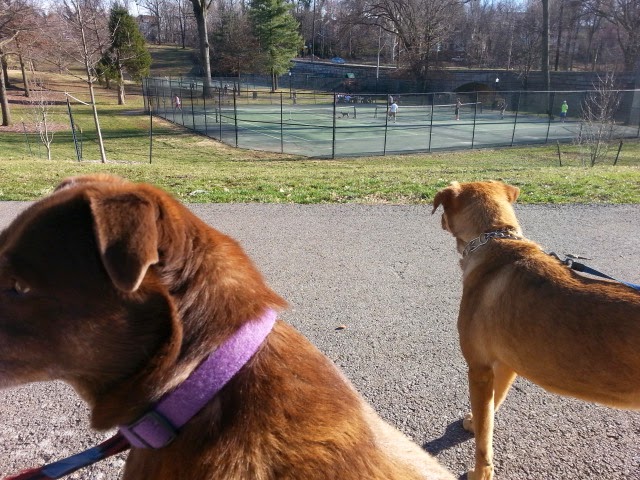 Incidentally, the temperature on the 15th was in the mid-70s.

A little over a week ago, Kentucky Senator Mitch McConnell wrote an op-ed piece arguing that state governments should not write standards for implementing new EPA regulations aimed at reducing greenhouse gas emissions from power plants. McConnell notes almost in passing that these regulations are "probably illegal," even though the regulations seem pretty clearly to be authorized (if not required) by the Supreme Court in a 2007 ruling. Essentially, the Bush administration tried to ignore greenhouse gas emissions under the Clean Air Act, but their position was inconsistent with the law. The case dealt with vehicle emissions, but power plants are obviously an even bigger source of the gases.

In December 2009, the EPA Administrator found:

The parts in bold effectively require the EPA to act to regulate greenhouse gases, which makes McConnell's argument fairly silly. Here's what is likely to happen if states follow McConnell's advice:


Jody Freeman, director of Harvard University’s environmental law program and a former senior counselor to President Obama, said that option would be worse for states than simply preparing and submitting their own plans.

“It would put states at a huge disadvantage if they choose not to file a plan,” she said. “It gives E.P.A. the option of implementing their own plan themselves, but the E.P.A. may not have the best plan for each state. States should be designing these plans themselves.”

Historically, states that have refused to submit compliance plans for E.P.A. rules have been forced to follow standards crafted by the department’s officials in Washington. Former Gov. Rick Perry of Texas, a longtime opponent of the department’s pollution regulations, for instance, refused to submit state-level plans for compliance to other rules. In the end, Texas businesses were eventually forced to comply with the federally imposed plan.

In any case, the McConnell story got me to thinking about the Obama administration's legacy on climate change. About 18 months ago, Time columnist Michael Grunwald wrote the following in a piece about the Keystone pipeline:


Imagine if President Obama had promised in his long-awaited climate speech in June to launch the first 45 renewable-electricity projects ever built on federal land, enough to power 4.4 million homes. Imagine that he also pledged to slash the government’s carbon emissions by 15%, jack up vehicle-efficiency standards enough to eliminate an entire year’s worth of U.S. emissions by 2025 and enact appliance-efficiency standards that would save enough electricity to power every single-family home for two years.

Then imagine if he vowed to spark a clean-energy revolution with unprecedented investments in wind, solar and geothermal power; electric vehicles; a smarter grid; cleaner coal; green research; and much more.

Here's the punch line he offered:

It also would have been weird, because Obama already did all those things in his first term. He has probably done more to reduce emissions than anyone else in history, but his critics on the right and the left haven’t noticed.

Long after Grunwald's piece appeared, in November 2014, Obama pledged that the U.S. would reduce greenhouse gas emissions "26-28% below 2005 levels by 2025." I realize that those numbers represent aspiration rather than action, but much of the reduction is going to come from policies already set in place.


To be eligible for consideration, a student-athlete must have earned a 3.0 grade point average for the previous semester and maintained a 3.0 cumulative average during his academic career.

The ACC men's team includes 21 student-athletes and they are all identified in the press release. In a 15 team league, that means that each school should have placed 1.4 players on the unit if the academic talent is evenly distributed. Then again, talent is often concentrated on the best teams -- that certainly happens with the all-conference teams selected based on athletic performance on the court.

What caught my eye in this story was the unusual concentration of academic talent on one team. One-third of the team members, seven players, are on the University of Louisville roster: "Earning the honor for the Cardinals are Wayne Blackshear, Montrezl Harrell, Anton Gill, Mangok Mathiang, Chinanu Onuaku, Terry Rozier and Quentin Snider."

Is this a point of pride or concern? I've never had any of the named student athletes in class, so I know nothing about them and am not commenting about them in any way. In fact, in my years at Louisville, I've never had a basketball player in class. Moreover, coach Rick Pitino has occasionally praised the intelligence of some of these players. Maybe this is a genuine point of pride.

However, I've been a faculty member at Louisville since 1991. Over the years, I've heard the numbers and can confirm that the kind of grade inflation mentioned in this local report is endemic. Look at slide 19 of this PowerPoint for some real data. The graphic demonstrates that about 60% of students at the university had a GPA of 3.0 or higher in the 2011-2012 academic year. In contrast, only about 40% had a GPA of less than 3.0. A couple of thousand students had a 0 to 1.24 GPA, which realistically means they flunked out of school and would not bring the overall GPA down in the long haul. Generally, the best students stay in school and graduate.

If the average student at an institution has a GPA over 3.0, then is the ACC really recognizing academic achievement?

Interestingly, five of the seven named players are listed as Communications majors, one is Sports Administration, and the other is undeclared.

Does this mean anything? I don't know, but if I were a reporter, I can think of one topic I'd like to discuss with athletic administrators. Actually, it's not even a new concern.

I realize questions about distance education might lead to completely reasonable answers. After all, I was a double major in college and Communication Studies was one of them. More than 30 years ago, prior to the onset of distance education, several of my classes were populated by top-level debaters and athletes, including Lynette Woodard and Bucky Scribner. Debaters, who were sent out to speak weekend after weekend, were interested in communication for obvious reasons. I suspect the athletes had good reasons for their choice as well.

Netanyahu with a Comic Bulls-eye

On Tuesday night, The Daily Show directed its attention to Israeli Prime Minister Benjamin Netanyahu and his speech to Congress. The program is simply terrific at revealing hypocrisy, inconsistency, and hyperbole. In this case, the focus was on Iran and its alleged threat to Israel and the rest of the region. As a side benefit, there is some reminiscing about the buildup to the Iraq war:

Jon Stewart is an American institution and I'm going to miss him when he departs the award-winning program.