I believe that this is the headstone of my great, great, great grandfather, buried in Clear Run Cemetery Bridgeton, Indiana.  That's about 150 miles from where I live. If correct, his descendants made their way to Kansas just before the Civil War began. 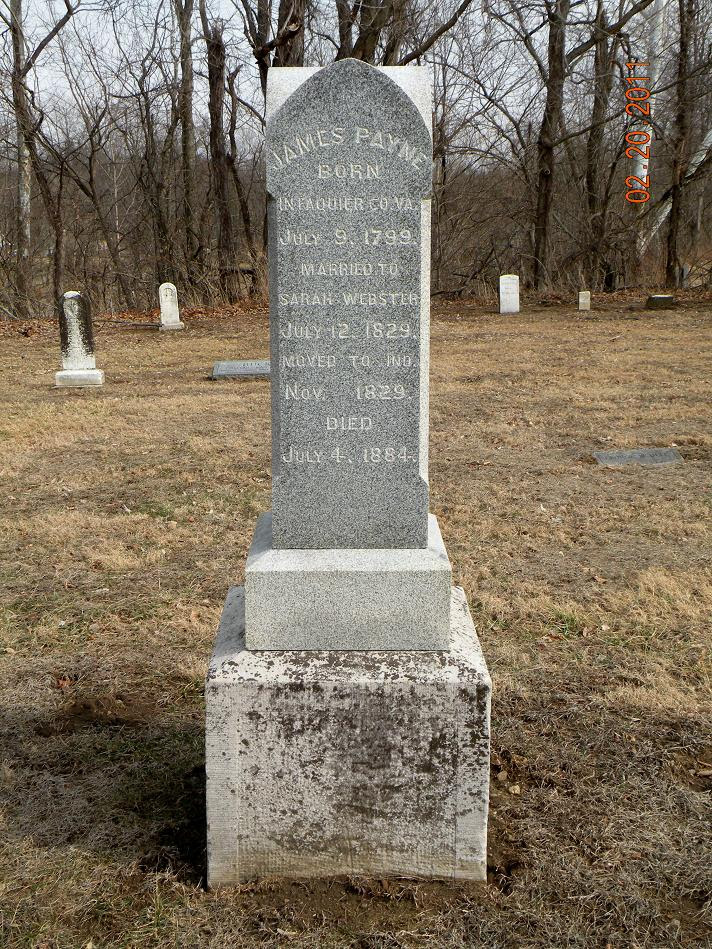 That was exactly 130 years ago today.

If the information at a grave site website is accurate (James Payne (1799 - 1884) - Find A Grave Memorial), then I'm descended from a Payne family from colonial-era Virginia. James's father Augustine fought in the Revolutionary War and also moved to Indiana (in 1835).

I'm definitely descended from George Daily Payne, who is supposed to be James's son, but George (my great grandfather) was born when James was 58 years old. That's 5 years older than I am now and is difficult to imagine. Moreover, the gravestone says that James's wife's name was Sarah Webster (married 1829), but the alleged son's webpage says that his mother was Maria Daily Payne. Given that George was born 28 years after the marriage between James and Sarah....then Maria could have been a second wife. Why is Sarah on the gravestone, but not Maria?

I think someone has made an error.

The accurate information seems to be that James Young Payne, married to Sarah Webster, is actually George's grandfather and his father was James Webster Payne, who married Maria Daly. George was in Kansas by the 1860 census, but the record indicates that he was born in Indiana, apparently in 1857. That would have been a violent time to be in Kansas, actually.

Kansas became a state in January 1861.

So there's some history.