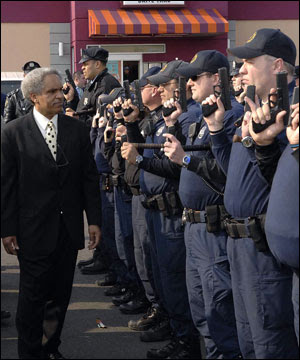 The Fashion Police are real, and they could be coming after your favorite baseball manager. Wednesday, during the 1st inning of a Red Sox-Yankee game, Boston manager Terry Francona was trying to decide whether his counterpart Joe Torre might order a bunt -- or perhaps a steal. The dangerous Derek Jeter had just hit a one out double.

Then, the unthinkable happened:

A security agent for Major League Baseball came into the Boston dugout and asked Francona if he was wearing his uniform top underneath his pullover fleece. Francona angrily showed the jersey top to the agent.

"I'm sure he was instructed," said Francona. "The timing was incredible. Unless this guy can put on a bunt play or something, he's got to stay ... out of the dugout. I've never seen anything like this before in my life. In the middle of the game, you have the fashion police. This is incredible. He made me show it. I was sort of in a hurry, because I thought Jeter was going to steal third. I was trying to go do my job."

As with so many personal stories in life, this one quickly led to Francona divulging too much private information in the public sphere:

Is it any wonder that the Yanks swept the Red Sox and gained 3 games in the standings this week?

Visit this blog's homepage.
Posted by Rodger A. Payne at Friday, August 31, 2007