I viewed Roman Polanski's "The Ghost Writer" last weekend and thought it was a reasonably entertaining political thriller. It wasn't exactly "Chinatown," but that's a pretty high standard.

The story is pretty simple: A new ghost writer is brought on to an autobiography project for a former British Prime Minister, Adam Lang, who seems quite obviously modeled on Tony Blair. The film is based on a book by Robert Harris, who was apparently friendly with the Blair government until the Iraq war. In the story, the original ghostwriter, a long-time political confident of the PM, has died under mysterious circumstances. Some characters suspect foul play.

In the film, the Lang character is under investigation from the International Criminal Court for his alleged "war crimes" or "crimes against humanity." The charges do not stem from Iraq, but rather from the UK's cooperation with American rendition program involving terrorism suspects.

The ICC plotline is somewhat implausible given that the ICC is designed to be initially deferential to state investigations of alleged crimes. The ICC webpage:

In general, a case will be inadmissible if it has been or is being investigated or prosecuted by a State with jurisdiction.

Despite this shortcoming, it was nonetheless interesting to think about the ICC as if it was a meaningful player in these kinds of circumstances.

The film also accurately teaches viewers a simple lesson about world politics. Not all states are party to the Rome Convention and accept ICC jurisdiction, but the list of non-member states is somewhat embarrassing for the US. I couldn't find the script on-line, but this section of dialogue is pretty close to the scene from the movie: 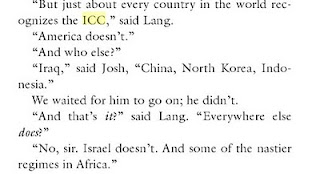 While the Blair/Lang comparison is obvious, I could not help but think of Polanski's similar situation.

As is well-known, the infamous director pled guilty on the charge of statutory rape (the alleged victim was 13) and fled the US in 1978. Despite extradition attempts, the director continues to make movies. Indeed, he won an Oscar in 2003 for directing "The Pianist."

I won't spoil the film's ending by revealing what happens to Lang (and other characters). You might want to check it out for yourself (now on DVD and on Showtime, I think).