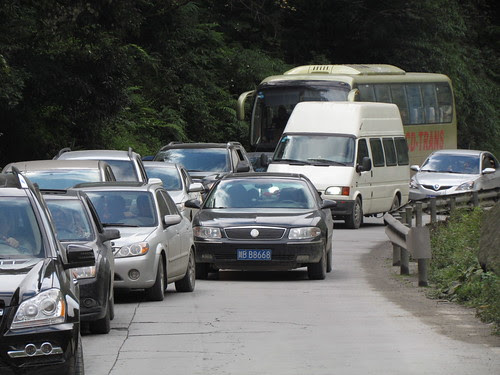 In 2006, the International Organization of Motor Vehicle Manufacturers reported  that "China became the world’s third-largest car market." That was thanks to a nearly 40% increase in sales over the prior year. By 2009, Chinese sources noted that China was the #1 car buyer -- a status partly based on 44% growth in China's market and a 21% plunge in US sales that same year.


China's passenger vehicle market ended last year with a 59 percent year-on-year sales increase to surpass the United States as the world's largest auto market for the first year, thanks to the central government's stimulus package.

Journalist Richard McGregor noted at the end of 2010 that China's auto market had exploded from 1 million domestic vehicles sold in 2002 to about 10 million in 2010. McGregor quoted consultant Michael Dunne to simplify the numbers with a comparison: "China has added the equivalent of two Japan markets in less than a decade." One-half million of those 10 million new vehicles are luxury cars like Porsches.

In any event, the implications of this change are profound. World oil demand will continue to increase as the Chinese buy more cars. In coming decades, Chinese petroleum demand will apparently match US demand. CIA data currently reveal that American oil imports are nearly double China's -- meaning that new demand for millions of barrels of oil per day will put huge pressure on international oil markets. Obviously, increased competition for oil, a potentially scarce resource, could have profound implications for geopolitical rivalry -- and energy prices. Michael Klare reports that "the conservative National Defense Council Foundation" found that "the 'protection' of Persian Gulf oil alone costs the U.S. Treasury $138 billion per year."

The climate implications are also potentially disastrous. In the US, more greenhouse gases are emitted from cars than from burning coal. China is now on a dangerous pathway:


The vehicle boom is also pushing up China’s greenhouse gas emissions. Transport emissions of carbon dioxide, the major warming gas, have at least quadrupled since 1990, to more than 350 million tons per year.

This means the transport sector is now about 5% of China's greenhouse gas emissions.

Some analysts suggest that China's rising demand for oil could make the state more likely to cooperate with the international community:


"China is learning that owning equity oil in risky regions may not be as effective an energy security strategy as it had previously imagined," said Amy Myers Jaffe, an author of the study and the Wallace S. Wilson Fellow for Energy Studies at the Baker Institute. "China is now finding itself mired in more energy-related foreign diplomacy than it bargained for.

"But this could be good news for the United States," Jaffe said. "It may mean China will be more inclined to act in concert with other members of the international community in conflict-prone regions."

Can the world really count on that happening?

Unfortunately, at least from an environmental perspective, recent growth in Chinese car sales is likely just the tip of the iceberg. China's vehicle ownership rates now stand at US levels from 1916. In 2008, people in China owned 37 cars per 1000 people. Some scholars predict that the rate will surge to 269 per 1000 by 2030, an eight-fold increase.

Incidentally, here's more cause for concern in new markets -- India's car ownership rate is about 6 per 1000 people...