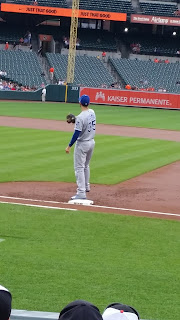 University of Louisville classes started last week and I already taught two sessions of my senior capstone seminar on "Politics of Climate Change."

Before summer slips away altogether, I'm posting a few pictures of our early August vacation trip -- to Baltimore first for a couple of days, then to the Delaware shore for about a week with extended family.

In Baltimore, an old friend snagged four tickets to the August 2 Orioles game against the Kansas City Royals. The O's won 6-0, unfortunately. We were seated very close to first base, so I snapped this photo of Eric Hosmer. The game was briefly delayed by rain in the early innings, but I still had a great time in terrific seats. Plus, the storm presaged the arrival of moderate August temperatures throughout our visit. 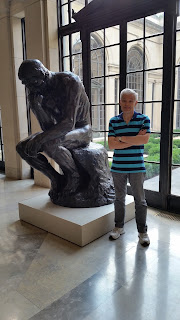 The following day, my spouse and I went to the Baltimore Museum of Art. It turns out they have a cast of Rodin's "The Thinker." The same statue has a prominent position in front of Grawemeyer Hall at UofL. In fact, the one at UofL used to be in Baltimore, but was sold when Baltimore acquired this one. 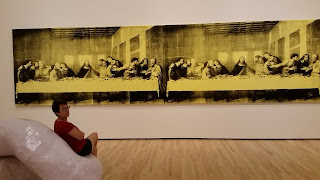 The BMA also has a number of Andy Warhol pieces, including a version of the "Last Supper." The city's artistic side is also revealed in its tribute to local native John Waters (pink flamingo, pictured below).

During beach week, we visited the Dogfish brewpub in Rehobeth, toured the Seacrets Distillery in Ocean City, and ate our share of fresh crab -- including some caught by family members. The younger generation cousins used chicken necks and nets to catch a family-record number this year! The first one we caught is pictured below. 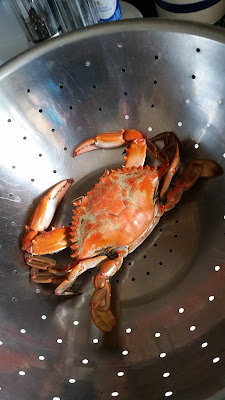