My family and I traveled to Nashville for Thanksgiving 2017 -- meeting my sister and her family there. It's an interesting travel destination and my spouse and I have visited several other times in recent months and years. Because of the multiple recent visits, we did not return to the Johnny Cash museum (which we previously enjoyed) or the bars along Broadway (which we sometimes didn't enjoy)..

This trip, we stayed in a chain hotel near Vanderbilt University and walked Wednesday to the Parthenon in Centennial Park. The large statue of Athena was worth seeing, but odd in some ways.

Friday night, we went to the Grand Ole Opry: 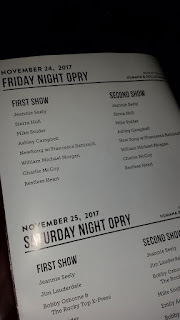 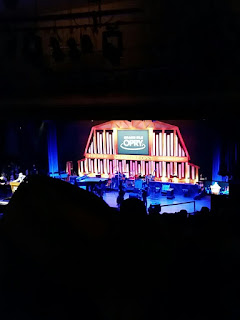 Ashley Campbell (daughter of Glen) sang a nice version of "Gentle on My Mind" and I enjoyed Sierra Hull's bluegrass performance. Charlie McCoy's harmonica playing was simply phenomenal -- he played "Orange Blossom Special," which our wedding band also performed back in 1991. I have never been a fan of final act Restless Heart. William Michael Morgan had a good voice, but needed more interesting songs.

Saturday, we visited the Country Music Hall of Fame and Museum, It held up well compared to the Rock and Roll Hall of Fame, which we visited on an Oberlin trip back in 2012. I was not that interested in many of the most recent exhibits, but the roots section was especially interesting and the video about country musicians on television was quite good. Why didn't Wanda Jackson become a bigger star?

Sunday morning, before we all departed, my oldest daughter ate this waffle: 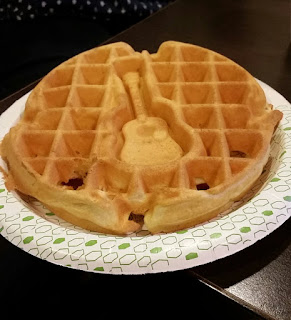