In December 2016, our dog Robey (nickname for Darrowby), was diagnosed with bladder cancer. The veterinarian noted that he was in good spirits and fairly good health, but that the prognosis was likely 6 to 18 months of remaining life. Given his age and the nature of the disease, surgery or other potential treatments did not seem like good options.

It's been 15 months since that initial diagnosis and Robey's health has definitely declined. He's much thinner now -- partly a result of the flu bug he and his sister Paddy contracted last summer at the kennel. There was a particularly horrible day in the first week of their quarantine when I feared he would not survive the flu. However, an emergency trip to the veterinary hospital provided an infusion of fluids and drugs that helped him turn the corner and recover much of his strength. His sister recovered much more quickly from the illness and is now far more energetic and healthy.

For the last few months, we've battled his occasional mild incontinence with a male doggie wrap lined with baby diapers. His mood has been good and I think he really enjoyed recent visits from our two daughters.

Sadly, the last two weeks, Robey has shown much less enthusiasm for his daily walk. About 10 to 12 days ago, he walked very slowly several steps behind me as his sister Paddy charged ahead as she almost always does. He has repeated that lethargic behavior on several other walks since then. Yesterday, my wife cut the walk short for him and I took his sister for a longer stroll around the neighborhood. He was walking so slowly that we caught up before they made it back home.

Robey has also stopped eating regularly -- effectively skipping breakfast on most mornings the last week or so and sometimes barely touching dinner. Twice in the last few days we have served him canned dog food at night, which he really enjoys and he has quickly consumed it mixed with the typical dry food. The past few days, however, he has had trouble keeping any food he consumes down. This morning, he vomited his medicines and it was obvious that last night's dinner had not been digested.

Twice over the weekend, he remained indoors behind the dog door when I parked the car in the garage in the alley and entered the backyard from there. Paddy was outside at the garage door to greet me, as she always is, but her brother clearly decided to continue resting indoors on the floor 75 feet away.

In sum, Robey is ticking all the boxes for a dog near the end of his life. He has been a great dog and we're going to miss him very much when he's gone. This is a photo from this morning -- after a freak March snow shower in Louisville last night: 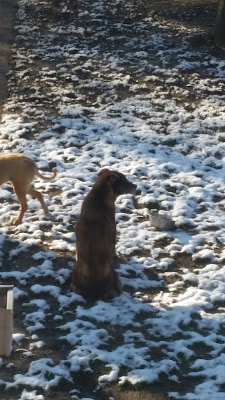