Though news reports suggest a new NAFTA deal is imminent, President Trump was tough on Canada again this week:


“We’re very unhappy with the negotiations and the negotiating style of Canada – we don’t like their representative very much,” Trump told reporters on Wednesday, in an apparent reference to Canada’s foreign minister, Chrystia Freeland.

Trump also claimed that he turned down a meeting [in NY at the UN] with Justin Trudeau to discuss the prospects of a deal “because [Trudeau’s] tariffs are too high and he doesn’t seem to want to move – and I told him: ‘Forget about it.’”

Canadian officials were quick to deny that Trudeau ever requested a meeting.

I'm posting this a little after midnight, so it is possible that there will be a new trade deal by the time you have read this piece.

In any event, living in Canada, there are strong signs that the feeling is mutual. This is a very strong sign: On Friday September 28, the Globe & Mail Washington columnist John Ibbitson published a piece in my morning paper entitled, "NAFTA nightmare is quickly becoming reality."

In that column (online version September 27), Ibbitson explained that "a resolute Prime Minister [Trudeau] and Foreign Affairs Minister [Freeland] refuse to be cowed by this bully of a president, this predator, this Mussolini wannabe."

I read those words over breakfast Friday!!

Saturday, my spouse and I strolled through the Byward Market on a sunny afternoon and came upon this photo in a bakery, where they were selling "Obama cookies" and playing a video of Obama's visit on a constant loop. Thus, the picture provides a parsimonious explanation of Trump's policy toward Canada: 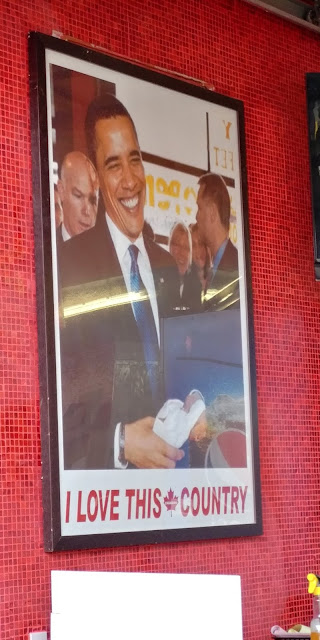