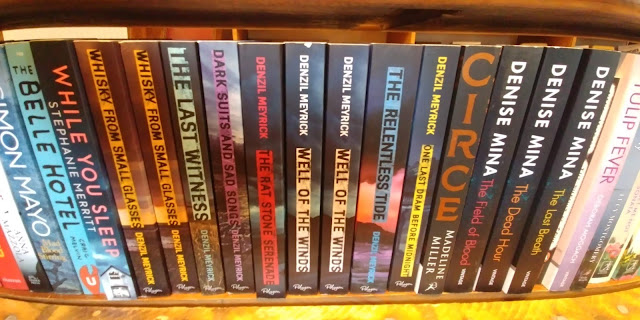 Please allow me to repeat the ground rules: First, I generally do not list academic books that I reviewed unless the review was published. In my academic job, for instance, I often read a number of books competing for a $100,000 prize exhibiting the best "ideas for improving world order."

So, what did I read this year, mostly for pleasure? They are listed below. I posted short reviews of most books at Goodreads. A few of the recommended books include a link to Powell's books; the blog receives a 7.5% commission on sales that begin via my Powell's links

The Spread of Nuclear Weapons; An Enduring Debate by Scott Sagan and Kenneth Waltz

The Hell of Good Intentions by Stephen Walt

None of these are 5 star books, but the top 4 or 5 books listed here are definitely worth your time. During my 18 month sabbatical, I read a number of works on decision-making and expertise. The Kahneman and Taleb books are important works on these topics in the public sphere. The former is based on a long and successful career in academia, the latter is longer than it needed to be and includes a lot of stories that could have been cut -- especially by someone like Taleb who is so critical of the "narrative" academic disciplines.

I used the Sagan and Waltz and Cohen and Zenko books in my International Security class last fall and think both are very good. The former worked better as a textbook, but Michael Cohen visited Louisville to speak in my class and I think that made a favorable impression on the students. I liked the parts of their book that focused on threat inflation, though my lectures included some examples that they overlooked. I was a bit less interested in their efforts to expand the security agenda by including domestic policy issues like gun control. I framed these as human security topics.

Walt blames liberals for many of the major mistakes in American foreign policy since the end of the Cold War. While they may deserve some of the blame, keep in mind that this foreign policy category includes many neoconservatives who often disdain multilateral institutions. To my mind, the U.S. failure to work cooperatively with other states is a much bigger problem than the high-minded aspirations Walt attributes to liberalism.

Only the Case book was sub-par. I published an article recently on the film Dr. Strangelove and didn't learn that much from Case's work. Indeed, he had some errors that should have been caught.

Finally, I also read just about every word in Baseball Prospectus 2019, but not in cover-to-cover fashion. The 2019 book was edited by Patrick Dubuque, Aaron Gleeman and Bret Sayre. Annually, I looking forward to the new edition, likely due in February.

As I traditionally do, I place the best works of literature at the top of the list, then the genre fiction (though there are some books that could be placed in either category). The least interesting or entertaining books are listed last in each section.

Half of a Yellow Sun by Chimamanda Ngozi Adichie

All our Wrong Todays by Elan Mastai

The Education of a Poker Player by James McManus

The Code of the Woosters by P.G. Wodehouse

Half of a Yellow Sun is a terrific book that I highly recommend to anyone interested in foreign affairs, as told through individual lives. In this case, the focus is on Biafra's 1960s struggles to win independence from Nigeria. It provides personal accounts of civil war.

Motherless Brooklyn provides an interesting spin on the detective genre given that the detective has Tourette's syndrome and works for a small-time hood. The larger caper is kind of far-fetched, but it is entertaining.

The Mastai book begins fairly strongly, but loses steam. The McManus book seems like a collection of short stories crying for a volume 2. Wodehouse is Wodehouse.

The Light of Day by Eric Ambler

North From Rome by Helen MacInnes

I is for Innocent by Sue Grafton

The Widening Gyre by Robert Parker

The 2020 Commission Report on the North Korean Nuclear Attacks Against the United States: A Speculative Novel by Jeffrey Lewis

Hide and Seek by Ian Rankin

Beyond Recall by Robert Goddard

The Murder on the Links by Agatha Christie

I Will Fear No Evil by Robert Heinlein

Thanks mostly to Bookmooch and PaperBack Swap, I continue to read books by a diverse array of (mostly) hard-boiled crime story authors. These writers typically develop a single main character across a long series of books: Parker's Spencer, Stark's Parker, John MacDonald's Travis McGee, Rankin's John Rebus, Grafton's Kinsey Millhone, and Ross Macdonald's Lew Archer. Nearly all of these were pretty good this year, though perhaps ultimately forgettable. Until refreshing my memory with Google, I'd already forgotten the plot of at least half of the books listed above involving those characters.

Kerr's Bernie Gunther solves crimes during the Nazi era in Germany, so that was certainly novel and interesting. Ambler and MacInnes wrote terrific spy fiction during the Cold War and these tales are harmed more by the way current readers depend upon their smartphones than by the broader historical changes that have occurred in world politics.

Modesty Blaise is sort of a female James Bond. This year, I preferred the former to the latter.

Stephen King's middle book of a trilogy was fine, but I did not need the chapter involving the detective visiting the killer from Book 1. Obviously he was establishing a plot line for the third book, but it distracted from this tale. This book would likely make a decent film.

The Heinlein book was easily the worst book I read this year. After a somewhat promising premise at the start, it devolved into a sexist and borderline misogynist story that I had to put down multiple times before deciding to power through it in December.