Friday, I gave a paper at the ISA conference discussing how America's dubious human rights practices in the "war on terror" undermine (rather than enhance) the legitimacy of American foreign policy. 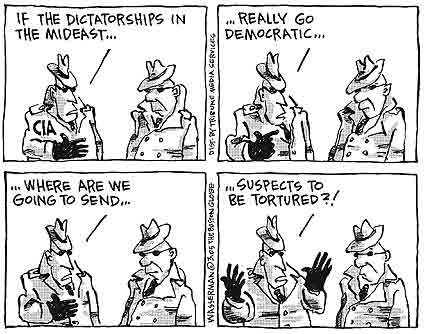 This weekend, the NY Times reported on the Bush administration's dubious "rendition" policy:

The Bush administration's secret program to transfer suspected terrorists to foreign countries for interrogation has been carried out by the Central Intelligence Agency under broad authority that has allowed it to act without case-by-case approval from the White House or the State or Justice Departments, according to current and former government officials.

The unusually expansive authority for the C.I.A. to operate independently was provided by the White House under a still-classified directive signed by President Bush within days of the Sept. 11, 2001, attacks at the World Trade Center and the Pentagon, the officials said....

As part of its broad new latitude, current and former government officials say, the C.I.A. has been authorized to transfer prisoners to other countries solely for the purpose of detention and interrogation.

The unnamed CIA official quoted in the article claims, laughably, that the US outsources these suspects because holding them is too costly and manpower-intensive.

Right. How much has security-related spending increased since 9/11?
Oh yeah, a hell of a lot.

The official also denies that torture is involved in these cases:

former government officials say that since the Sept. 11 attacks, the C.I.A. has flown 100 to 150 suspected terrorists from one foreign country to another, including to Egypt, Syria, Saudi Arabia, Jordan and Pakistan.

Each of those countries has been identified by the State Department as habitually using torture in its prisons....

The covert transfers by the C.I.A. have faced sharp criticism, in part because of the accounts provided by former prisoners who say they were beaten, shackled, humiliated, subjected to electric shocks, and otherwise mistreated during their long detention in foreign prisons before being released without being charged.

While the anonymous "official" claims compliance with the non-torture policy is "very high," he or she acknowledges that it likely was not 100%.

According to the new CIA director, the new Attorney General may be a liar. Both are quoted by the Times:

Alberto R. Gonzales, then the White House counsel, said in written Congressional testimony in January that "the policy of the United States is not to transfer individuals to countries where we believe they likely will be tortured, whether those individuals are being transferred from inside or outside the United States." Mr. Gonzales said then that he was "not aware of anyone in the executive branch authorizing any transfer of a detainee in violation of that policy."

...In Congressional testimony last month, the director of central intelligence, Porter J. Goss, acknowledged that the United States had only a limited capacity to enforce promises that detainees would be treated humanely. "We have a responsibility of trying to ensure that they are properly treated, and we try and do the best we can to guarantee that," Mr. Goss said of the prisoners that the United States had transferred to the custody of other countries. "But of course once they're out of our control, there's only so much we can do. But we do have an accountability program for those situations."