Kevin Drum has posted a chart of the latest civilian casualties in Iraq. Actually, his chart is taken directly from right-leaning blogger Engram. They reveal the purported "success" of the surge -- massively reduced death totals compared to a year ago.

However, as I've noted previously, his numbers also reveal that the current level of death is about the level of 2005. To his credit, Engram does not try to hide this, his chart includes data from the second half of 2005.

Yet, as Engram acknowledges in comments, ICCC data are not the best. The Iraq Body Count provides superior data:

The ICCC numbers are mainly for tracking trends. They are the ones I usually use because they are immediately available at the end of every month. The IBC numbers, which take longer to process, give a more accurate indication of the absolute number of casualties.

IBC data aren't as favorable as the ICCC data. They show the same trend, but reveal a significantly higher civilian death toll in Iraq.

In fact, comparing the data, it looks like IBC reports about one-third more deaths each month than does ICCC.

Moreover, for the latest data, IBC numbers are likely underestimates. Indeed, when Engram last used IBC numbers for a chart (in October), the September body count estimate was around 700 to 750. Just a couple of months later, in its year-end summary, the IBC changed this number to 1220. IBC itself says that the initial estimates can increase substantially as the complete data emerges. Consider January and February 2008 data to be quite tentative.

Here's the same sort of chart, using IBC's latest data. Compare it to Engram's and the main difference is that the montly death totals are much higher. That's worth noting, even if the current totals are only estimates. 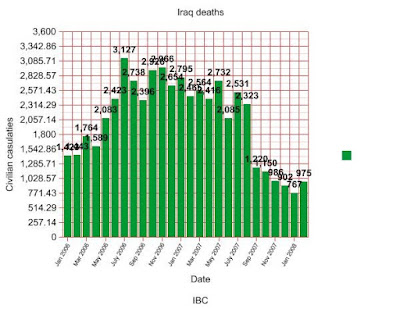 Graphing from this source.


The latest February number is only a one month swing, but I'm certainly not ready to pop any champagne corks.