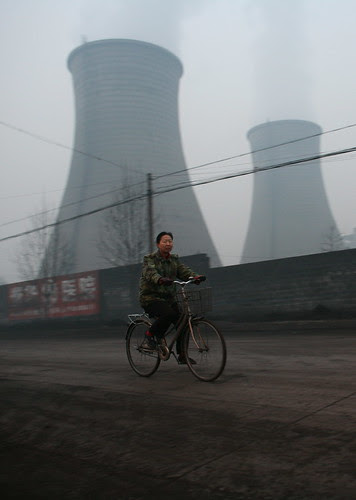 While environmentalists are rightly very worried about the effects of mining and burning the world's remaining coal reserves, many are now just as concerned in the post-Fukushima world about the safety of nuclear energy. Prior to this year, nuclear power was increasingly viewed as the most feasible near-term alternative to coal-fired electricity.

It is well-known that China's vast coal reserves are of special concern to environmentalists. As the NYT reported two years ago, "China now uses more coal than the United States, Europe and Japan combined." China opens two or three new coal-fired plants every week! As for the nuclear alternative, China suspended nuclear construction plans after the Fukushima accidents in March. However, recent news reports suggest that China will resume its ambitious nuclear plans after it releases a new safety program in August.

Lucia Green-Weiskel, project manager of the climate change program at the Beijing-based Innovation Center for Energy and Transportation, thinks that China could use the current moment to slow its nuclear plans and invest more heavily in other "greener" energy technologies. After all, China is officially committed to finding sustainable solutions:

China passed into law its Twelfth Five Year Plan, which will serve as the country’s economic blueprint until 2015. The primary theme of the plan is sustainable development, with a high priority on securing nonfossil fuel energy sources. New policies include reducing carbon intensity by 17 percent by 2015. That means manufacturing entities would need to emit at least 17 percent less carbon in 2015 than they emitted in 2010 for the same amount of economic output. The plan also mandates ambitious energy-cutting targets, implementation of market mechanisms like cap and trade, and generation of 11.4 percent of total energy from nonfossil fuels by 2015, up from the current 8 percent. Pre-Fukushima, a sizable portion of that 11.4 percent was to come from nuclear sources. That target is being reconsidered.

I've previously noted that China is becoming a major player in "green" energy technology. It's a small bit of good news in a future that otherwise looks clouded by coal soot.

Green-Weiskel emphasizes the stakes in these decisions. A bold move by China would have profound global implications -- for the future of the technologies as well as for the environment:

it is possible that one consequence of the horrific meltdown in Japan will be China’s accelerated development of clean and safe energy. With its huge economy, driven by central planning and aggressive government investment, China is the only country building a green-technology industry on a scale that could bring down global prices of solar panels and wind turbines, making them affordable in the developing world. This should be a key part of the global strategy to keep emissions under 350 parts per million, the maximum threshold recommended by climate scientists. For this to happen, solar and wind energy must become cost-competitive not only with nuclear but with fossil fuels. Given China’s size and unique role as world manufacturer and exporter, it is fair to say that it is the best hope for giving solar and wind energy that boost.

Is China really the best hope for a sustainable future? If so, what does that imply about the prospects for such a future?

Inevitably, this discussion ties into old debates about democratic versus centralized decision-making about the environment. Does the world need green leadership with dictatorial authority?

Democratic states certainly seem more accountable to the costs of pollution -- and responsive to the wishes of their constituents. Like China, a number of democracies have suspended their nuclear plans in the wake of Fukushima. However, both Germany and Switzerland have announced that they intend to phase-out their reactors altogether. China's brief moratorium seems unlikely to lead to that kind of decision. A stronger declaration about a safe nuclear future seems far more likely. Thus, I remain skeptical that the future of environmentalism rests with leadership from non-democratic regimes.