The baseball season is roughly one-third completed and a number of observers are calling this "the year of the pitcher." Of course, many analysts used the same phrase last season primarily because an unusually large number of pitchers threw no-hitters in 2010.

This year, the phrase is being tossed around because teams are scoring many fewer runs. Indeed, baseball 2011 looks a lot like baseball 1988-1992. Look at the runs scored per game in this chart, which I created at the invaluable baseball-reference.com. 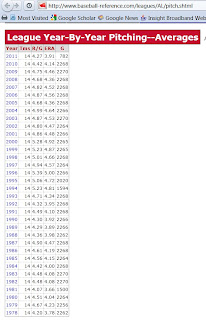 Long-time fans might remember that 1987 was an unusual summer -- rookie Mark McGwire hit 49 homers (he was on my very first fantasy baseball team that year), Andre Dawson of the Cubs also hit 49, and Toronto's George Bell hit 47. More importantly, a lot of guys unexpectedly hit for power -- the kind of power fans started to take for granted from the mid-1990s through the next decade. My first fantasy team featured Milwaukee's Dale Sveum at SS. He hit 25 homers in 1987 -- after hitting 7 in 1986. He would hit 9 in 1988. In a dozen major league seasons, he hit over one-third of his home runs in 1987.

These unusual homer numbers from 1987 signaled a new era for power, though that era (primed by performance enhancing drugs) didn't really arrive for a few seasons. And the influence of PEDs was hard to pinpoint given that most major league teams built new stadiums, announcers provided a lot of talk about rabbit baseballs (and corked bats), and the summers were very hot (which is conducive to home run hitting). Whatever the cause, between 1994 and 2000, teams often scored a full run more per game than they are now. That may seem small, but the difference is 160 runs over a full season.

Baseball implemented its first PED testing regime in 2001, for minor leaguers only. The major league program began in 2003 and was toughened in 2005. Presumably, the stigma associated with links to steroids has had a deterrent effect on some potential users.

I'm beginning to wonder if the latest data truly signal the end of the PED era? While there are a couple of individuals who are raising some eyebrows, the scoring numbers reveal that major league baseball is changing at a steady pace -- reverting to a game fans have seen not-so-long ago.