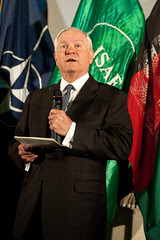 Weary of war in Afghanistan? If so, you are not alone. Osama bin Laden has been dead for five weeks, but the US soldiers attempting to link that fact to America's ongoing presence in Afghanistan found no sympathy when they recently questioned visiting Defense Secretary Bob Gates. As reported in the LA Times June 7:

Over and over again, soldiers and Marines on the punishing front lines across Afghanistan had the same question for Defense Secretary Robert M. Gates: Does Osama bin Laden's death mean the U.S. can finally wind down a nearly decade-long war?

Not yet, Gates replied.

For years, the Bush administration's "theory of the case" about terrorism, so to speak, was that terrorists were a big problem if they had state sponsors -- especially if those sponsors could provide them with weapons of mass destruction. Afghanistan had been a safe haven for terrorism, OBL was experimenting with some chemicals and talking to nuclear scientists, so the US had to be in Afghanistan. And, of course, this was the primary justification for the Iraq war.

Does anyone really still believe the US is in Afghanistan because of those original fears? Last August, Steven Metz of the Army War College explained very succinctly the flawed assumptions of US strategy in Afghanistan.

And for many years, analysts like Peter Bergen have pointed out the obvious -- terrorists don't really need a state sponsor:

consider the most spectacular acts of terrorism of the past decade: the first Trade Center attack ha 1993; the satin gas attack in the Tokyo subway in 1995; the destruction of the federal building in Oklahoma City in 1996; the two simultaneous bombings on U.S. embassies in Africa in 1998; the USS Cole attack in 2000; 9/11 itself; the 2002 assault in Bail that killed 202; and the commuter train bombings ha Madrid this year that killed 191. All were carried out by groups or individuals that did not have state sponsorship.

I expect more and more security analysts to call for prompt US withdrawal from Afghanistan. Bob Gates is leaving -- why listen to him?