Unanswered Questions about Saudi links to 9/11 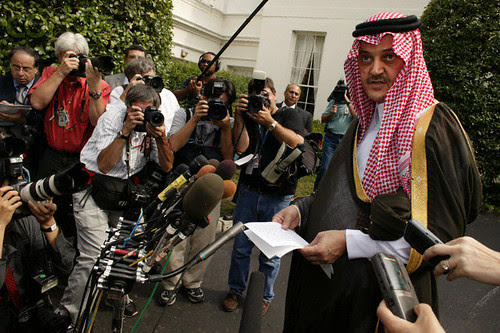 So, here we are a decade after the 9/11 attacks and many long-time mysteries of the early Bush "war on terror" years have been solved -- Osama bin Laden was located in Pakistan and killed; Scooter Libby of Vice President Dick Cheney's office leaked covert CIA agent Valerie Plame's name to Robert Novak to bolster the dubious case for war on Iraq; and the anthrax terrorist was identified by the FBI after he committed suicide. Bruce Ivins was a Army-employed microbiologist.

Not every loose end has been tied together, of course. For example, we still don't know very much about alleged Saudi connections to the 9/11 hijacking plot.

As long-time readers may recall, neither congressional investigators nor the 9/11 Commission were completely forthcoming about this topic. From Salon, two days ago:

What's in the famously redacted 28 pages?

A joint inquiry of the House and Senate intelligence committees produced an 800-plus page report on activity of the intelligence community in connection with the 9/11 attacks, completed in December 2002. But 28 pages were redacted in the public version, all in the section titled "Finding, Discussion and Narrative Regarding Certain Sensitive National Security Matters." It has been widely reported that those pages -- which neither the Bush nor Obama administration have declassified -- deal with links between 9/11 hijackers and Saudi government officials. Newsweek, for example, reported that the section "draws apparent connections between high-level Saudi princes and associates of the hijackers."

As long as those pages remain classified, though, it's impossible to assess the nature of those connections.

I'm no "Truther," but as this story from McClatchy on September 7 reports, there are still puzzling mysteries concerning the alleged Saudi connection to the hijackers:

Just two weeks before the 9/11 hijackers slammed into the Pentagon and World Trade Center, members of a Saudi family abruptly vacated their luxury home near Sarasota, Fla., leaving a brand new car in the driveway, a refrigerator full of food, fruit on the counter — and an open safe in a master bedroom.

In the weeks to follow, law enforcement agents not only discovered the home was visited by vehicles used by the hijackers, but also phone calls were linked between the home and those who carried out the death flights — including leader Mohamed Atta — in discoveries never before revealed to the public.

Local counterterrorism officials describe a scene that sounds like it came from a movie you've already watched:

"The beds were made ... fruit on the counter ... the refrigerator full of food. ... It was like they went grocery shopping. Like they went out to a movie. ... (But) the safe was open in the master bedroom, with nothing in it, not a paper clip. ... A computer was still there. A computer plug in another room, and the line still there. Looked like they'd taken (another) computer and left the cord."

The story quotes former Florida Senator (and former Select Intelligence committee member) Bob Graham saying that this news "opens the door to a new chapter of investigation as to the depth of the Saudi role in 9/11. ... No information relative to the named people in Sarasota was disclosed."

Graham has raised similar concerns for years. Until more is revealed about what the US knows of the Saudi role in the 9/11 attacks, people are going to keep asking these sorts of questions. Some will be formulating troubling conspiracy theories.