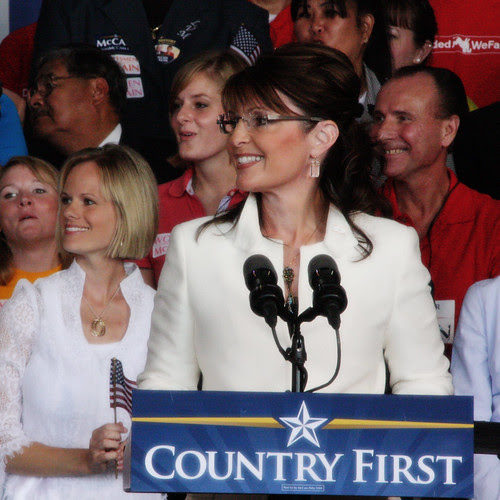 Who writes Sarah Palin's speeches? Saturday, in Iowa, she spoke out against crony capitalism:

“I want all of our GOP candidates to take the opportunity to kill corporate capitalism that is leading to this cronyism that is killing our economy,” Ms. Palin said.

Does she understand the meaning of "crony capitalism"? From Investopedia:


What Does Crony Capitalism Mean?

A description of capitalist society as being based on the close relationships between businessmen and the state. Instead of success being determined by a free market and the rule of law, the success of a business is dependent on the favoritism that is shown to it by the ruling government in the form of tax breaks, government grants and other incentives.


[Palin] outlined economic proposals for creating jobs, including the elimination of all federal corporate income taxes. She said the cozy relationship between political contributions and government favors needed to be exposed and eliminated.

And as a reminder, consider Sarah Palin's multi-million dollar job working for Rupert Murdoch at Fox News. From The Nation's Eric Alterman in the September 5 edition:


One key factor must always be kept in mind when discussing Rupert Murdoch: he has a lot of money ($7.6 billion, according to Forbes) and makes even more for other people. Between 1977 and 2001, News Corporation outearned every other blue-chip company save Berkshire Hathaway and Walmart. And while money might not buy you love in America, it does buy a great deal of special favors and improper indulgences from powerful people.

Being a billionaire media mogul is even more fun when it comes to politics. Not only do politicians need your cash; they need your newspapers, magazines and TV networks too. It is this unholy nexus that Murdoch has mastered...

Murdoch regularly uses book deals, television contracts and columnist gigs as bribes to the powerful, just as he uses these same properties to punish those who refuse to go along. Don’t forget that until recently, Murdoch had four potential Republican presidential candidates on the Fox payroll. One of them—Sarah Palin—even got a state-of-the-art studio built in her home, gratis. And each of these powerful people has a pretty strong incentive to look the other way every time one of Murdoch’s properties or employees feels it necessary to break a law here or there in the service of the great man’s power, profits and influence.

Either Sarah Palin is a brilliant ironist, or she represents the dénouement of a horrifying Orwellian nightmare.