This week, Millennium: Journal of International Studies has published my article on "Cooperative Security: Grand Strategy Meets Critical Theory?" The piece is a revised version of the paper I delivered at the London School of Economics conference during October 2011. Here's the abstract:

Last Tuesday, May 22, I posted "How the Sausage is Made" on the Duck of Minerva group IR blog. Andrew Sullivan kindly linked to the post and nearly 15,000 people have viewed it to-date. Apparently, in the 7-year history of the Duck, it is the most-viewed post!** Thank you Zack Beauchamp.

If you haven't read the piece, it includes audio (with pictures) of world leaders speaking frankly about their negotiating position on greenhouse gas emissions reductions. The audio track is from  the 2009 Copenhagen climate change summit and the leaders apparently didn't know the session was recorded. I cross-posted "Making Sausage" on the e-IR climate blog as well on May 23.

On May 5, I posted "Climate Change and Godwin's Law" on Duck of Minerva and it was cross-posted on e-IR on May 6. In case you are not familiar with the phrase, "Godwin's Law" refers to the implications of someone referencing Hitler or the Nazis in an internet debate. 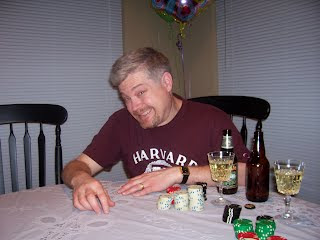 This is me a few years ago, playing poker.


** It appears that the Google source I used for this information has only been tracking Duck of Minerva since July 2009.