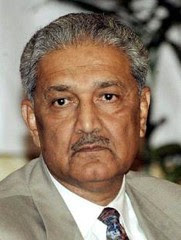 It has been a few weeks since the anniversary of Osama bin Laden's death. However, I meant to blog this line from a May 2011 piece by Cyril Almeida, a columnist for Pakistan's widely-read Dawn.


"If we [Pakistan] didn’t know [bin Laden was in Abbottabad], we are a failed state; if we did know, we are a rogue state."

Almeida continues with a question, "But does anybody really believe they didn’t know?"

Some readers may recall that I presented a conference paper about Pakistan as a possible target in the "war on terror" back in October 2008. In that paper, I argued that Pakistan could easily have been viewed as a foe all the way back in September 2001.

Actually, I've not been especially kind to Pakistan on this blog for some years:

Pakistan is the "ally from hell" according to a December 2011 Atlantic piece by journalists Jeffrey Goldberg and Marc Ambinder. While they discuss many of the same problems I've been addressing on this blog over the years, the authors end their piece by taking on the question of command and control of Pakistan's nuclear weapons. Indeed, they urge U.S. policymakers to remain "focused on the most important goal: keeping Pakistan’s nuclear arsenal secure and holstered." That might not be easy, as they report:


In 2006, General Kidwai, the SPD [Strategic Plans Division] leader, told a U.S. audience at the Naval Postgraduate School in Monterey, California, that Pakistan maintained for its nuclear arsenal the functional equivalent of two-person control and permissive action links, or PALs—coded locks meant to prevent unauthorized arming of a weapon. When asked about Pakistan’s PAL protocols, one former U.S. defense official replied, “It has never been clear to me what Pakistani PALs really entail. The doctrine is ‘two people’—but is it two people to unlock the box around the warhead, or is it two people to launch the thing once you’ve mated the warhead to the missile?”

In short, bin Laden is dead, but there are still many reasons for security analysts to worry about Pakistan. A nuclear-armed failed state is just as worrisome as a rogue state with the bomb.