While on vacation last week, my spouse and I managed to take in a baseball game in Lansing. We've been vacationing in Michigan for many years, but we have not attended a baseball game since 2004. We previously took our children to White Caps games in Grand Rapids -- and the kids received free caps!

There was not much of a crowd Monday, June 26, despite it being "Dog Days of Summer" night (dogs entered for free with their owners). It was a bit cool for late June baseball -- 66 degrees for the first pitch. In any case, we got to see two of Toronto's top hitting prospects. Both are sons of former major league players.

Bo Bichette (son of Dante) is a shortstop hitting about .400. In the picture below, he drove in the first run of the game in his first plate appearance. I'm glad I snapped quickly as he swung on the first pitch, which he also did in his next PA. Later in the game, he struck out and then was also called for interference -- a runner attempting to steal second base on his swing was also called out. Bichette has a quick bat, but did not seem to be a patient or controlled hitter. 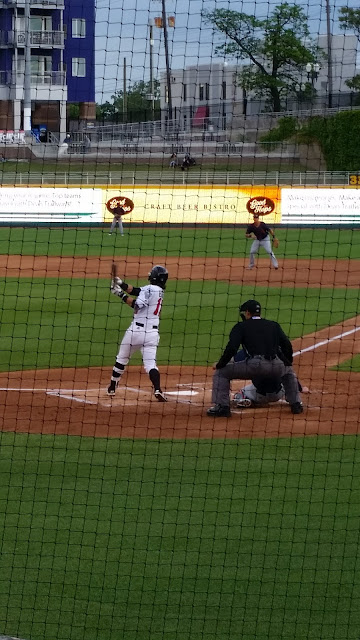 Vlad Guerrero Jr. (son of Vlad) is listed as a third baseman (and played the hot corner in this game), but looks to be destined for the opposite corner given his build. He is also having a very good offensive season and some analysts believe he will be in the majors before he is 21. My spouse and I saw Guerrero's father play in Montreal in June 2001 when we were in that great city celebrating our 10th wedding anniversary during their annual jazz festival. Vlad Jr. would have been 2 at the time. Both he and Bichette are younger than our daughters who did not travel with us to either Montreal or Lansing. 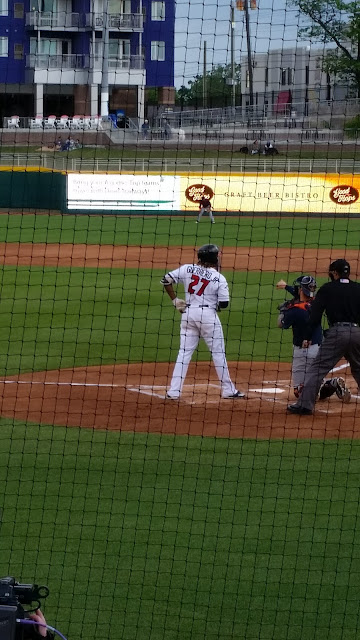 A couple of other top Jays prospects were also in the game. Outfielders J.B. Woodman (2016 round 2 draft pick) and Joshua Palacios (2016 round 4 pick) were a combined 1-for-8 in the game with 3 strikeouts. Palacios led off with a hit in the first inning and scored the game's first run.

The game ended 4-3 for the home team as Guerrero led off the bottom of the 9th with a single and advanced to second on a wild pitch. A pinch runner moved to third on an infield out. Then, the Bowling Green Hot Rods elected to walk the next two batters intentionally. After a strikeout, a relatively new member of the Lugnuts, catcher Javier Hernandez ended the game with a walk-off single. He was mobbed by his teammates.

Tampa Rays infield prospect (playing 3B Monday) Adrian Rondon was 0-for-4 in the game with two strikeouts. Outfielder speedster and 2015 Rays #1 draft pick Garrett Whitley was 0-for-2 with a walk. The Rays #1 draft pick from 2016, infielder Josh Lowe, hit a 3-run homer in the 8th inning to tie a game that had been 3-0.

Game Notes: When Hot Rod SS Lucius Fox batted, I tried making Batman references, but no one within ear shot seemed to know what I was talking about....I also tried pig Latin references when Mitch Nay batted, but....A local Michigan SABR member sat just behind us. He mentioned writing bios for the SABR bio project and traveling to various minor league parks (including Slugger Field). Unfortunately, we didn't talk long and I don't get his name....We had great seats right behind home plate, but probably could have sat about anywhere for less than the $12 per seat that we paid. The stadium was really empty....For a couple of innings, we sat in the leftfield restaurant Good Hops. The food was good and the tap list looked impressive, but I was not drinking beer thanks to meds I was taking for a summer illness....The ballpark is called Cooley Law School Stadium, which seemed strange. Any other parks named for units within a local University? We drove by the Cooley Law School downtown as we headed to our hotel.

Update July 9: Baseball America has released its midseason top 100 prospects and Rays outfielder Jesus Sanchez is #100. He was 2-for-4 in the game, both singles. He batted 6th in the Hot Rod order and played LF.