You Go Girl -- and take Bush and the Neocons with You

NewsMax.com: (Fox News) reported the other day that Dr. Condoleezza Rice, former Stanford Provost and current National Security Advisor has been named "the most powerful woman in the world" by Forbes magazine. 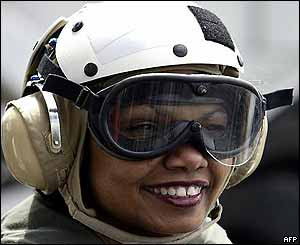 The article didn't say, but maybe the honorary degree she got from University of Louisville put her over the top?

Actually, as I noted in February, it's hard for me to forgive Rice for not reading what she called a "footnote" to the October 2002 National Intelligence Estimate. As it happens, because of a book chapter I'm writing, I read most of that document today.

Let me remind readers of one of the report's central conclusions (this is a part she claimed to have read): "Iraq does not yet have a nuclear weapon or sufficient material to make one." The CIA thought such a weapon would be in Iraq's arsenal by 2007 to 2009...so you can see why it was so urgent to attack in March 2003.

Then again, according to a USA Today/CNN/Gallup poll conducted just days after the 2002 State of the Union address (that's the Niger uranium one), 28% of the respondents said they were "certain [it] is true" that "Iraq has nuclear weapons." Another 49% said it was "likely but not certain."

Do you suppose Rice's statement about not wanting to wait for a mushroom cloud had anything to do with that?

I guess the fact that Rice recommended war in the face of the skeptical intelligence data, helped convince people that it was true, and then made sure the President agreed...means she is powerful! Really powerful.

You also know someone is powerful when she becomes a cultural icon. For instance, supremely talented Texas singer-songwriter Steve Earle has a tune about Dr. Rice on his latest CD. I don't own it (yet), but the San Jose Mercury News had this Saturday:

Over a calypso beat, he [Earle] sings the praises of the former Stanford professor in ``Condi Condi.''

"Sweet and dandy, pretty as can be

"You be the flower and I'll be the bumble bee

"People say you're cold but I think you're hot."

Nobody ever called Earle a shrinking violet. But his new album, "The Revolution Starts . . . Now," which came out Tuesday, is political even by his outspoken standards.

Apparently, the song also includes this line, "Pretty little Condi, precious as can be, Bet you never had another love like me."


Note: The Washington Post says the Earle record is good, though flawed.

It is a "frisky combination of early-'90s-reminiscent alternative country and shuffly, Keith Richards-style rock. While it isn't the record it might have been, much of it is literate and sympathetic in the way the best Earle efforts can be.

Email ThisBlogThis!Share to TwitterShare to FacebookShare to Pinterest
Labels: neoconservatism